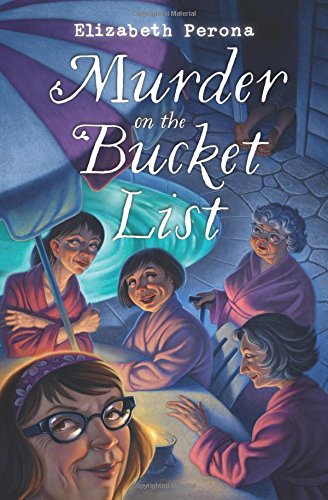 A group of 70-something friends, determined to check items off their bucket lists, get together one night to skinny dip in the backyard pool. But before they can muster the courage to take the plunge, one of them notices a foul odor coming from the pool shed. When they open the door to investigate, the corpse of a local man falls out.

This should have been a great start to a cozy with a wonderful premise and potential for light entertainment. Unfortunately, the story gets bogged down from the beginning by the weight of a cast of too many characters who all have a similar voice. The reader has to work hard to keep track of who’s who.

But if the reader can get past this initial misstep, the underlying story develops into a well crafted mystery set in Indianapolis with fascinating insight into the world of auto racing. The murder victim, a highly regarded mechanic for midget racing cars, had a connection to the owners of the house where his body was found. When the homeowner becomes a suspect, the ladies are compelled to try to prove him innocent and find the real killer.

Along the way they become an instant social media sensation and are reluctantly propelled into the national network spotlight. One funny scene occurs while the ladies have a mishap on a live broadcast of Good Morning America. From that point on they are pursued by paparazzi, threatened by the Homeowners Association, and warned off by the local law.

Despite these obstacles to their investigation, they manage to uncover cheating at the races, secret relationships (some of them too close to home), and a second dead body. From this point on the pace of the story picks up considerably, and the second half of the book lives up to its mystery potential.

What big secret has the suspect husband been keeping from his wife for so many years? Why are his accountant and lawyer covering up for him? What is the true relationship between the murder victim and race car driver he was mentoring? Who had the skill to commit both murders in such a unique way? The authors skillfully weave several subplots together to keep the reader guessing until the final reveal.

This series has a lot of potential, but the authors would do well to reduce the cast of main characters or spice up the dialogue by giving each of them a more distinct voice. Then the reader won’t have to work so hard to engage in the story.