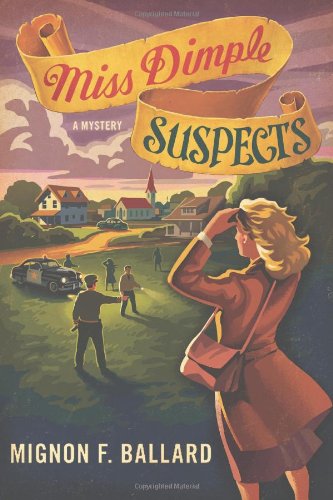 “Mignon Ballard has woven a story complicated with both charming and menacing characters.”

The setting is World War II in the small town of Elderberry, Georgia. Everyone is doing their best to help in the war effort. Sons, husbands, and fiancés are deployed in the military, while women work in munitions factories and roll bandages. Many commodities are rationed like gasoline, rubber, and sugar. And bitter public sentiment runs high against the Japanese.

Miss Dimple Kilpatrick has been a fixture at Elderberry Grammar School for a good long while. She teaches her first graders with both firmness and compassion.

When little Peggy Ashcroft goes missing just a few weeks before Christmas, everyone remembers a similar case that occurred 25 years ago when another little girl disappeared—and was never seen again.

The teacher has a good notion where Peggy might be, and discovers the little girl in the freezing twilight of the dark woods. With only a small flashlight and the help of a friendly dog, she carries the feverish Peggy to the secluded house of elderly artist Mae Martha Hawthorn and her secretive Asian companion, Suzy.

As is often the case in small towns, many folks are related and most people know one another. Certainly Miss Dimple is no exception. Her many friends include fellow teachers Charlie and Annie and librarian Virginia, all of who step up to help harbor the fugitive Suzy and solve a mystery.

After Miss Hawthorn’s funeral, another body turns up. When Miss Dimple and her friends look for the missing paintings, they narrowly escape an attempt on their lives. And all those relationships the reader thought were random begin to come together to paint a complete portrait of greed and deception.

Mignon Ballard has woven a story complicated with both charming and menacing characters. At first the reader may have difficulty untangling all the relationships and connections between the inhabitants of this small town, but the effort pays off.

Reading Ms. Ballard’s skillfully written narrative is like relaxing with all the time in the world to visit with a familiar friend. She speaks to us with humor, affection, and insight. Elderberry Georgia has that tranquil feeling of a bygone era that was much gentler and far more naïve. But the violence that penetrates that world through war, murder, and bigotry—“none of us is safe with that sneaky little Jap on the loose”—carves a much deeper and compelling story.