Hex on the Ex (A Mind for Murder Mystery) 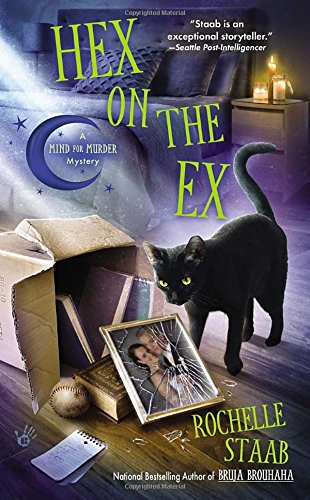 Clinical Psychologist Liz Cooper has a pretty good life. She has a close-knit family and a hunky boyfriend, Professor Nick Garfield. Nick teaches religious philosophy at a local college and occasionally consults with the L.A.P.D. on cases involving practices of magic and the occult.

Liz has just bought a cute older home she is renovating. Since she doesn’t have a working shower, she uses the one at a gym owned by her ex-husband Jarret, a star relief pitcher for the Dodgers.

One morning she runs into Laycee Huber, a former friend from Atlanta who had an affair with Jarret. That night during a game at Dodger Stadium, when Laycee attempts to renew their old friendship, Liz tells her “You’re dead to me.” Liz has no idea that someone else is listening in, someone who will be only too happy to tell the police what he heard.

The following morning Liz briefly stops at Jarret’s house to pick up the last of her belongings, unaware that Laycee lies dead in Jarret’s bed with devil worship symbols drawn on her back in blood. Nick is called in by the police to decipher the symbols and help them find the killer.

First Jarret falls under suspicion. Then the police learn about Liz’s remark and she becomes a prime suspect. In a desperate effort to clear her name, Liz and Nick follow the cryptic trail of clues that lead them to a madman and his legacy of death.

Rochelle Staab has managed to write another smart and sassy mystery with lots of intriguing information on occult practices and symbology. In the first two books of A Mind for Murder Mystery series, Ms. Staab explores the worlds of voodoo and santerîa. In her third book, Hex on the Ex, she tackles the subject of devil worship. The reader who is unfamiliar with any of these practices will find the details fascinating.

Ms. Staab delivers a good yarn from a fresh point of view. She gives the reader plenty of suspects, a good story line, and great pacing. Her characters are drawn with warmth and humor. No wonder she was an Agatha Award nominee.