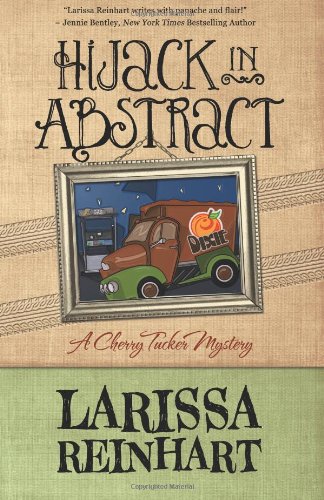 Cherry Tucker just wants to be an artist, but she keeps getting waylaid by people who need her help.

First there’s her uncle Will, the local sheriff of Halo Georgia, who calls her in the middle of the night to come to the station and sketch the face of a killer from a witness description. A truck has been hijacked and the driver shot to death.

When the witness is murdered the following morning, Cherry pays a condolence call and discovers he left behind a sickly grandmother and an eight-year-old son with no means of support. When the old lady says she can’t afford a funeral for the victim, Cherry tells her, “I’ll make some calls for you. We’ll get you a funeral. And I’ll make sure we find Tyrone’s killer.” That promise gets Cherry into a world of trouble.

Then there’s her ex Todd, her brother, and her sister who all need a place to stay. The three of them move into Cherry’s tiny two-bedroom cottage and take over her workspace—all because she can’t say no.

Cherry’s troubles don’t end there. Her newest boyfriend, a deputy sheriff, just dumped her and her archrival Shawna is out to destroy her reputation as a painter and a person. To make matters worse, her grandfather has transferred all his affections to his new girlfriend, leaving Cherry out in the cold.

Who’s a girl to turn to? Well, there’s the town’s prominent Russian businessman, “The Bear” who offers to champion her cause, and more if given a chance. Then there’s a wealthy Russian attorney in Atlanta with mysterious connections to the bear, who will pay big money to have Cherry paint his portrait. And of course, there’s the boyfriend who just dumped her, Todd the ex, and a goat named Tater.

Cherry’s desire to help leads her to a seedy trailer park near Halo, a bar full of hostile truckers, and a mansion in Atlanta. Because she has a problem keeping her mouth shut, she’s stalked, almost run over, threatened by angry tuckers, cornered by drug dealers, and shot at.

Larissa Reinhart manages to braid a complicated plot into a tight and funny tale. The reader grows to love Cherry and her quirky worldview, her sometimes misguided judgment, and the eccentric characters that populate the country of Hula, Georgia.