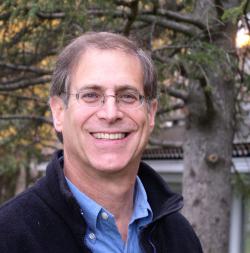 Jeff Lowenfels, author of Timber Press’ bestselling Teaming With Microbes: The Organic Gardener’s Guide to The Soil Food Web, is also the Cal Ripken of garden columnists. His weekly column has run in the Anchorage Daily News for over 34 years, never missing a single week, even for vacations. One of the most humorous and entertaining lecturers on the circuit, Jeff is also a reformed lawyer. The combination of garden writing and law earned him the moniker of “America’s Dirtiest Lawyer.”

Despite an extremely well-honed sense of humor, Jeff is a highly respected and popular, national, garden writer. He is the former President of the Garden Writers of America, a GWA Fellow, and in 2005 was inducted into the GWA Hall of Fame, the highest honor a garden writer can achieve.

Mr. Lowenfels has become a leader in the organic gardening/sustainability movement. His talks have converted tens of thousands of gardeners at venues throughout North and South America. His book was reviewed as the most important new gardening book in 25 years, is a bestseller in the U.S. and Canada, England, New Zealand, and Australia, and has been translated into French and Korean.

Mr. Lowenfels grew up as an indentured servant on his father’s hobby farm in Scarsdale, New York. There he was forced to plant, weed, mow, and pick fruits, flowers, and vegetables on an eight-acre “gentlemen’s farm” replete with vegetable gardens, a Versailles-style formal flower garden, a 100-tree fruit orchard, and countless landscape shrubs, lawns, and decorative beds. One day, while attending law school, he was held up and shot. As a result, he ran as far away as he could go without a passport and ended up in Anchorage, Alaska. There he has been able to translate his work-filled childhood into a meaningful and enjoyable hobby.

He hosted Alaska public television’s most popular show, “Alaska Gardens with Jeff Lowenfels.” The show was so popular, it ran four times a week and aired even in Barrow, way above the Arctic Circle. Today, Mr. Lowenfels hosts a popular, weekly garden radio show.

Most important, he is the founder of a now-national program, “Plant a Row for the Hungry.” The program is active in 49 states and has resulted in over 20 million pounds of produce being donated to feed the hungry every year. He encourages gardeners every where he goes to participate in the program and constantly reminds his fellow garden communicators of the pressing need to solve the hunger problem.

Harvest: An Adventure into the Heart of America's Family Farms (P.S.)

“Richard Horan sure can write! [but] Many of us already know this stuff from listening to NPR in Walmart parking lots.”

“This is the real deal, folks. Midnight Sun, Arctic Moon: Mapping the Wild Heart of Alaska won’t take you long to read.

Founding Gardeners: The Revolutionary Generation, Nature, and the Shaping of the American Nation

Making real people come alive to readers must be the Holy Grail of those who write historical fiction.

Susan Freinkel had me from the minute I finished reading about her attempt to try to live without plastic for a week. It lasted a total of . . .

Author David Haviland really dug into history to come up with some pretty esoteric stories in his compilation Why You Should Store Your Farts in a Jar (And Other Oddball or Gross Maladies, Affl

Let’s get the easy part out of the way: I highly recommend The Quiet World: Saving Alaska’s Wilderness Kingdom (1879–1960) by Rice University history professor Douglas Brinkley.

The Science of Kissing: What Our Lips Are Telling Us

It’s probably a good thing that when Louis Armstrong sang, “A kiss is just a kiss,” Sheril Kirshenbaum’s The Science of Kissing had not been published.

The Secret World of Slugs and Snails: Life in the Very Slow Lane

I don’t know. I am torn over The Secret World of Slugs and Snails: Life in the Very Slow Lane. On the one hand, it is an encyclopedia of snail and slug information.

Adventures among Ants: A Global Safari with a Cast of Trillions

When I was six, thousands of large, black, ants suddenly covered the floor of my bathroom. I have been fascinated by ants ever since.

Small-Plot, High-Yield Gardening: How to Grow Like a Pro, Save Money, and Eat Well by Turning Your Back (or Front or Side) Yard Into An Organic Produce Garden

Sal Gilbertie and Larry Sheehan are clearly very good organic vegetable gardeners who have been at it for a long time.

How to Grow Practically Everything

Right off the bat, I have a confession to make: I do a weekly question and answer radio show and the idea of having ONE book that can tell me how to grow practically everything, well, it would be a