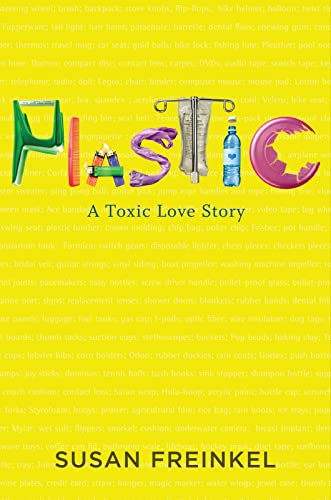 Susan Freinkel had me from the minute I finished reading about her attempt to try to live without plastic for a week. It lasted a total of . . . ten seconds as she realized on the first morning that even the toilet seat was made of this ubiquitous material. Instead, she decided to list all the plastic things she came into contact with—a daunting task in and of itself.

Ms. Freinkel has penned a fascinating—and at times extremely disturbing—book about material that has literally invaded and, as her research reveals, infected every aspect of modern life.

Ms. Freinkel deftly traces the evolution of the development of plastics and its invasion of every aspect of modern society. We learn that plastic was popularized by making copies of expensive luxuries such as turtle shell combs into items affordable by the masses. From Frisbees to plastic chairs, these stories become a terrific mechanism in which to weave in the science of making plastic and its obvious (and not so obvious) impact on day-to-day life.

Ms. Freinkel makes the case that this pervasive, manmade substance has created a schizophrenic situation for all of us. Nothing highlights this observation better than Ms. Freinkel’s discussion of the use of plastics in medicine. Surrounded by plastic from MRI machines, tubes, and hypodermic needles to plastic medicine bottles and transfusion bags, it is clear that we benefit greatly from its employment. But recent discoveries point to the dark side of plastics. Some leach out and into food, drink, medicine—even transfusion blood—usually without our knowing it and often with disastrous consequences to our endocrine system.

The impact on humankind of plastics entering our systems and leaving behind poisons—such as dioxins and furans derived released from PVCs, for example—requires a re-examination of our use of plastics with an eye to balancing its positive aspects and negative effects.

Ms. Freinkel’s clear explanation of this bristling conundrum makes for some sober thinking. Fortunately, her book presents a thoroughly fascinating set of facts and seemingly much of what we all need to know so we can start to understand the debate that is surely around the corner: the future of plastics.