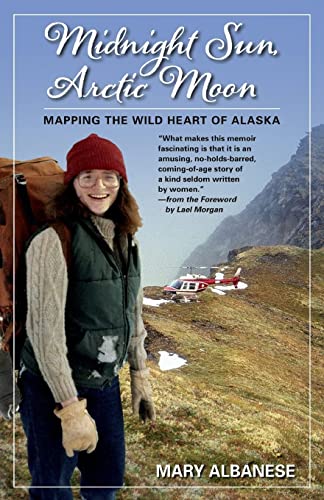 “This is the real deal, folks. Midnight Sun, Arctic Moon: Mapping the Wild Heart of Alaska won’t take you long to read. It so accurately captures a time when there was a special feeling you could find only in Alaska: one of hope and innocence and the sky’s the limit.”

It was easy for this reviewer to relate to the circumstances that brought the author of Midnight Sun, Arctic Moon to Alaska. We both immigrated to the new, 49th State around the same time, both drawn by some serendipitous force as people don’t grow up planning to move to Alaska. We both quickly learned why it was nicknamed “The Great Land” and both instantly fell in love with it.

It was never easy to explain those heady days when the young state of Alaska presented wide open, unlimited, opportunity to those who came to live there. The State was young, underpopulated, and lacking talent and an inexperienced geology student named Mary could find herself above the Arctic Circle before her first letters even arrived from back home and could soon become the expert rather than an apprentice.

This was the world of Mary Albanese and so many others who came to Alaska in the sixties and seventies. And she captures that exciting world, mixing in just the right doses of Alaska’s undeniable sexism, its understaffed land grant school, its badly insulated living quarters, ever present dog poop, undeniably shitty weather and terrible bugs—all with exactly the right dashes of special, Alaska love for neighbors and friends, flying, cold, snow, sledding, extreme recreating, and bizarre working conditions, newness and freedom. Mary Albanese nails it.

She captures an Alaska in which there really was a need for sled dogs to get around and wood stoves to heat homes. Alaska, where there was gold and other minerals and helicopters and young students to help find it. Alaska, before the big oil money and the hoards of Outsiders and cell phones and Hummers and fast food places. Alaska, where there were places no person—let alone a woman new to a profession that wouldn’t let the fair sex underground—had stepped.

Encounters with bears, runaway dog sleds, cold that you have to live to understand are all so wonderfully described Ms Albanese. She delivers the soul of a time when a special way of life still existed, so special that it made it worth living so far North. She gives this period a voice and feeling so those who weren’t there can understand why so many of us found so much warmth even in the coldest of cold.

This is the real deal, folks. Midnight Sun, Arctic Moon: Mapping the Wild Heart of Alaska won’t take you long to read. It so accurately captures a time when there was a special feeling you could find only in Alaska: one of hope and innocence and the sky’s the limit. I know. I was there and I was taken back again to that old frontier through Mary Albanese’s excellent autobiography.