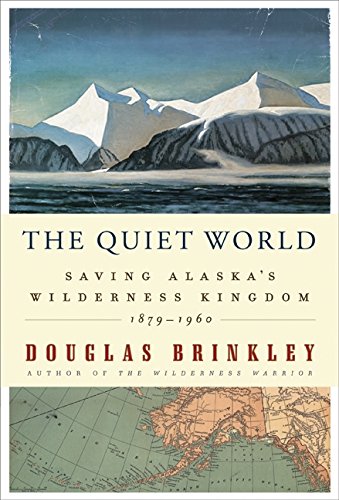 Let’s get the easy part out of the way: I highly recommend The Quiet World: Saving Alaska’s Wilderness Kingdom (1879–1960) by Rice University history professor Douglas Brinkley.

This is a thoroughly readable and incredibly well researched history of the efforts to prevent the destruction of the incomparable (and now unique) beauty of the Alaskan wilderness by the extraction industries, specifically fur, timber, coal, fishing, and oil as well as trophy hunters. It is also, by the very nature of the subject, the history of the conservation movement in America.

In sum, the book covers the beginning of the conservation movement in America starting with John Muir, Teddy Roosevelt, Gifford Pinchot, and Charles Sheldon, and takes the reader all the way to through the efforts of Adolf, Olauf, and Mardie Murie; Franklin Roosevelt; Justice William Douglas; Rachel Carson; and even Walt Disney; Jack Kerouac; Dwight Eisenhower; and scores of others to protect “The Great Land.”

If you think this sounds dry, you are wrong. It’s a story chock full of intrigue, politics, heroes, scoundrels, sheep, bears, moose, otter, seal, caribou, birds, glaciers, and vast expanses of mountain ranges, tundra, forests, and wilderness—the protection of which continues to be the source of controversy both in Alaska and the rest of the United States.

If conservation is your thing, this is a must read, a book to study and cherish. Every Alaskan must read it. Every American should, too.

Now the confession: The EPA paid for my legal education. I ran away from NY to Alaska some 36 years ago. I started and raised my family there. My first job was working for a law firm that represented the Sierra Club in the fight against the TransAlaska Oil Pipeline and whose founders helped create the largest state park in the nation. I worked for the late Governor Jay Hammond, an ardent environmentalist who, I learned from the book, once shot 300 wolves from an airplane in one day! I represented the more development-oriented Governor and Secretary of Interior, Wally Hickel, who became a great friend, dreamed of great projects for a Great Land, but also had more than a tinge of Teddy Roosevelt conservationist in him.

I represented both extraction industries and environmentalists, native villages and native corporations. I was president of a Fortune 500 company’s unit that permitted an 800-mile natural gas line from Prudhoe Bay to Valdez (which was never built). At times I represented the oil industry and more often fought it. I have seen Teddy Roosevelt’s signature on land withdrawal documents, visited many of the places covered in the book, and watched in awe the magnificence of the Northern Lights. I went to Alaska as an environmentalist, but slowly became what I considered to be a responsible "boomer." I am ashamed and embarrassed that much of the history presented by Brinkley was totally unknown to me as I am sure it is to most Alaskans as well as lower 48ers.

For one, I now understand no one can fully appreciate Alaska until they learn what efforts were taken to protect it from shameless profiteering and development. At the heart of The Quiet World is the conflict between those who want to develop and use as many of it's natural resources as they can versus those who believe Alaska’s resources belong to all people, including future generations. It is Jack London’s thrilling rush to develop gold versus Barry Lopez’s calm insistence that the world needs places where it is quiet and empty of all remnants of industrialization. This conflict still exists.

As for the future of Alaska, the conflict will be between those who see Alaska as containing the last bits of true wilderness in the United States and those who see it as a rich bread basket of resources that should be exploited. This conflict is an extremely complicated matter, fueled by government efforts over the years to homestead and populate Alaska for all sorts of reasons (military and resource needs in particular), and the attitude created by the very heroes of the book: that Alaska should serve as some sort of national version of the San Diego Zoo and more—a place where there are no roads intruding on the land, where man cannot industrialize nature, and where the land can remain, untouched, as it has been for eons. Many of us in Alaska struggle with this dichotomy on a daily basis.

For this Alaskan, The Quiet World helped resolve the internal confusion. In the end, the need for places where there are no roads, no manmade noises, no extraction of resources (no matter how valuable) becomes compelling and wins out over corporate interests which, by their very nature, have no soul and must produce today what might better be produced tomorrow or not made at all.

The gap in the book is its failure to continue documenting the history of protecting Alaskan through modern times, which includes the construction of the TransAlaskan Pipeline, the creation of Native Corporations to settle aboriginal claims, and the post 1960s fight over and the eventual passage of the massive land withdrawals in Alaska embodied in ANICLA, The Alaska National Interest Lands Conservation Act of 1980. To some this Federal Act is seen as the real culmination of the battle begun by Muir, Roosevelt, the Muries and all the others, the “completion” of the goals of a movement in the country’s history Brinkley so aptly researched and records in The Quiet World. To others, it remains an act to repeal.

Of course, Alaska and particularly the Arctic National Wildlife Refuge (ANWR), is still vulnerable. There is more history to come. Hopefully, Brinkley will write it.

I do wish Douglas Brinkley and his publisher, Harper Collins, would have included more than the one, hard-to-read map, which is found at the end of the book. Maps to accompany the narratives would be very helpful to those not familiar with a state that, if cut in half, would make Texas the third-largest state. And while the book has ample footnotes, it lacks and needs an index.

Still, it is an important book. You cannot possibly understand the environmental and conservation movements without knowing the history detailed by Brinkley in this book. By the same token, without the knowledge of this history, you cannot fully understand Alaska or Alaskans, be it Sarah Palin, me, or any of the 680,000 or so citizens.

So profound was the impact of reading The Quiet World, however, that I am ready to repent for my sins. What better way to start than to get as many as I can to read this important book?

If you have an interest in understanding the principles of conservation and how they were developed, or understanding the essence of Alaska and why constraints were imposed on its people and lands, you must read The Quiet World. Please.