Harvest: An Adventure into the Heart of America's Family Farms (P.S.) 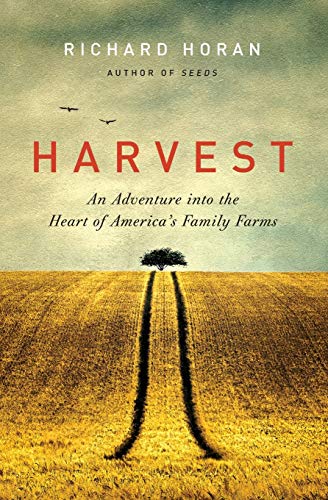 “Richard Horan sure can write! [but] Many of us already know this stuff from listening to NPR in Walmart parking lots.”

In the introduction to Harvest: An Adventure into the Heart of America’s Family Farms, author Richard Horan finds himself sitting in his rusted van in a Walmart parking lot, waiting for his daughter while she buys a cell phone. He is listening to NPR and worrying about the toxins coming from the pavement beneath the car. Seeing obese people walk out of Walmart, he describes a singular event from his childhood involving an elderly Italian woman who was inordinately proud of her delicious peaches.

Ah, I thought, here is a nature writer who not only knows how to write a story, but has a great sense of humor—and can get it down on paper. His description of the mole on the chin of the peach grower had me laughing out loud. Indeed, there were lots and lots of clever lines in Harvest. Richard Horan sure can write!

Unfortunately, despite the humor and extremely good writing, I didn’t really enjoy Harvest. There was something about the story that I found unpleasant, and I can’t quite put my finger on it. May be that is why you should read the book and see if you agree. It could be just me.

For example, I found the whole venture to be incredibly self-centered. When he is unemployed, we are supposed to feel bad for Richard as he comes up with an idea to make some money, all the while having has a literary agent and allowing his young teen daughter to buy a new cell phone. Does anyone see a disconnect here?

Mr. Horan pokes fun at some of the characters he meets along the way. Yes, he was probably just describing them as he saw them and aiming for some yuks, but as those people provide the heart of the book’s content, instead of hilarity in schadenfreude, I felt uncomfortable.

Who knows, maybe Mr. Horan picked the wrong subject about which to write. An autobiographical account of learning about others harvesting 10 different fruits and vegetables seems a bit random and opportunistic a pairing.

Maybe the problem is with this reviewer. I was expecting a travel journal focusing on the greener aspects of the subject matter, for perhaps the idea behind all travel journals is to be self-absorbed. Or perhaps Mr. Horan doesn’t realize how trite some of the messages he garnered from his journey really are. Many of us already know this stuff from listening to NPR in Walmart parking lots.

Again, to be fair, Mr. Horan is a great writer with a wonderful sense of humor. He is obviously a keen observer, too. It just seemed that the book was a bit frivolous, a lark, a middle-aged diary—and not my cup of tea.