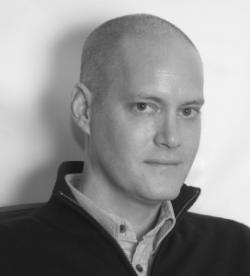 Andrew J. Peters is an award-winning author, an educator, and an activist. His novel The City of Seven Gods won the 2017 Silver Falchion award for Best Horror/Fantasy and was a finalist for 2016 Sci Fi/Fantasy Book of the Year at the Foreword Indies. His Werecat series was a 2016 Readers’ Choice finalist at The Romance Reviews. He has written two books for young adults (The Seventh Pleaide and Banished Sons of Poseidon), and he is the author of the adult novel Poseidon and Cleito.

Mr. Peters grew up in Buffalo, New York, studied psychology at Cornell
University, and has spent most of his career as a social worker and an
advocate for lesbian, gay, bisexual, and transgender youth. He has been a contributing writer at Queer Sci Fi, The Good Men Project, Gay YA, YA Highway, and La Bloga, among other media.

While writing, he works as an administrator and an adjunct faculty at Adelphi University. He lives in New York City with his husband Genaro and their cat Chloë.

The City of Seven Gods

Banished Sons Of Poseidon
This item is no longer valid on Amazon.

The House in the Cerulean Sea

“Beyond the narrative wisecracks and ridiculously disastrous situations Colfer puts the characters through, what makes Highfire so successful is the author’s sharp, compelling craf

The Gurkha and the Lord of Tuesday

“The Gurkha and The Lord of Tuesday achieves immense enjoyability.

“A good book for knight versus dragon diehards but perhaps not as much for fantasy readers looking to be transported to worlds not seen before.”

Dark elves and rogue warriors battle for the fate of a savage world in an action-packed, high fantasy relaunch of R. A. Salvatore’s Dungeons and Dragons-inspired franchise.

In her follow up to The Half-Drowned King, Linnea Hartsuyker continues her novelization of Snorri Sturlison’s “The Saga of Harald Harfagr” in an immaculately researched story that stands u