The House in the Cerulean Sea 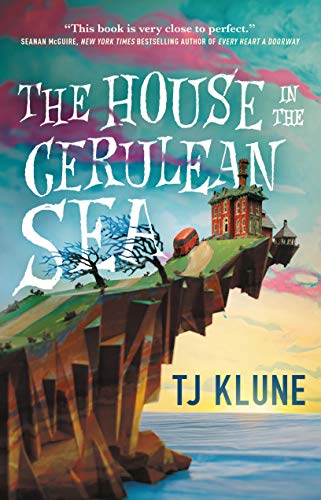 T. J. Klune’s latest title could be the lovechild of Miss Peregrine’s Home for Peculiar Children (Ransom Riggs) and a Nora Roberts’ second chances, found family romance. Casting the romantic leads as two gentlemen in their forties gives the story something new and jaunty, but The House in the Cerulean Sea otherwise treads the tried-and-true household of magical misfits theme. Klune orchestrates with just the right comfy phrasing to delight readers who swoon from all things heartwarming, complete with a minimally angsty will-they-or-won’t-they romance hook.

Linus Baker is a severely mild-mannered, wide-hipped, 40-year-old civil servant at the Department in Charge of Magical Youth. The book’s near-world premise is as such: magical beings live among humankind as an oddity and a threat that must be contained through quarantined schools and orphanages managed by a cold, labyrinthine, and often incompetent bureaucracy.

Klune’s skewering of that bureaucracy serves the story’s best comic punches and will remind readers of a Terry Gilliam film. The world has a curiously British, communist-hysteria era feel, and sound. People use typewriters, address one another as Mr. or Mrs., and listen to 1950s rock ’n’ roll on record players. Posters reminding citizens: “If you see something, say something,” are ubiquitous.

Linus is an exemplary case worker whose reputation for thorough, unsentimental investigation earns him an assignment to check out an unusual, top secret foster home on a remote island faraway. Linus would prefer to carry on his quiet life working in the department’s central office and spending his nights with his cat, listening to the Everly Brothers. Yet, he sees his work as important, protecting the citizenry and upholding reasonable standards of care for creatures who are in essence still children despite their potential dangers. More to the point, he really doesn’t have a choice when Extremely Upper Management hands out marching orders.

Provided minimal briefing, Linus is terrified to discover the home includes a precocious six-year-old named Lucy, short for Lucifer, who might be the son of Satan. The other children are a feisty garden gnome, a plucky sprite, a shy boy who morphs into a Pomeranian when frightened, a young wyvern, and Chauncy, whose nature is a mystery, some hybrid of marine invertebrate and human. Chauncy is obsessed with becoming a bell hop when he grows up.

The children’s overseer Arthur Parnassus is naturally quite eccentric himself with perennially unkempt hair, trousers that ride up the ankles of his overlong legs, colorful socks and wingtip shoes. He seems to take an instant liking to Linus, though Linus cannot be sure of his motives. Arthur is astonishingly cavalier about his charges, who surely ought to be under vigilant supervision.

There must be a German word for things that are so ugly, they’re irresistibly cute. Like Pugs. Anyway, it would be a good way to describe the children Linus must evaluate and determine whether or not they are in a suitable environment. While red-eyed Lucy goes on rants about the horrors he will reign down on humanity, it’s like watching Baby Stewie from Family Guy. Amorphous, tentacled Chauncy is similarly less of a monster and more an awkward, approval-seeking boy, who one happily indulges with penny tips for carrying the luggage.

On the other hand, there is an English phrase that’s been applied to adult fiction: Children should be seen and not heard. Klune takes quite the opposite approach, and one expects his audience will be split down the middle regarding that matter. Be prepared for long scenes of orphan banter and their simple, yet preternaturally honest and wise observations about the world. Charming or gag-inducing? You decide.

Ultimately though, one expects Klune’s righteous message that all people deserve freedom and humanity will warm even the coldest misanthrope’s heart. Shunned magical creatures are an allegory jackpot and a story about the triumph of our better instincts is perhaps particularly nurturing for the soul at a time when fearmongering political rhetoric, resurgent white nationalism, and efforts to codify religious bigotry have many of us wondering how far we’ve come from the government sanctioned persecution of the past. In Linus, Klune has created a vividly drawn character whose journey to awaken to the harmful institution he’s been part of is well-paced and appealing.

Moreover, Klune is a skilled and ruthless charmer, thus if misunderstood baby dragons who hoard brass buttons aren’t your thing, just try resisting two lonely eccentric bachelors who fit together like Jack Sprat and his wife.

Another goofy, feel good victory for Klune fans and a title of interest for fantasy readers who like an irrepressibly romantic storyline.