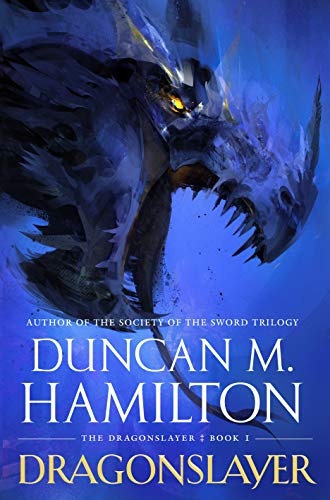 “A good book for knight versus dragon diehards but perhaps not as much for fantasy readers looking to be transported to worlds not seen before.”

Sword and sorcery gets a capable, standard treatment in Duncan Hamilton’s simply titled Dragonslayer, the first installment in a planned fantasy series.

The world is Mirabaya, a medieval monarchy with knights, provincial lords, hardened peasants, and a corrupt church with tyrannical methods for keeping the citizenry in line. The hero is Guillot de Villerauvais, a storied Chevalier of the Silver Circle, who’s broken from the deaths of his wife and child five years past along with his dismissal from the king’s service for a misstep in his otherwise flawless career. He drinks too much, is out of shape, and has cultivated a misanthropic edge, but he’s of course primed for a comeback.

The villain is the Prince Bishop Amaury, who is secretly reviving sorcery and searching for a mystical grail while leading a campaign to drive evil witchcraft out of the lands so he’ll have sole control of those powerful arts. Then there’s the dragon, awoken after sleeping through millennia during which men exterminated his kind with a long-lost magic, though Solène, a family-less young woman from the countryside, may be the one to bring that magic back.

French names and courtly manners give the story some style, but one can pretty much connect the dots all the way through to the end after reading the first few chapters.

A nice surprise however is scenes taken from the dragon Alpheratz’s point of view. His portrayal holds the most pathos and originality. His mate, his hatchlings, and perhaps every member one of his kind were murdered in man’s war against dragons. There was a time when the two co-existed peacefully, but in a sad, familiar turn, uncomfortably resonant today, man’s greed, fomented by religious fervor drove men to destroy the “other.” Alpheratz is realized in enjoyably terrifying detail, massive and impenetrable, and with all the complex emotions of a human. Though he seeks vengeance in arbitrary fire-breathing sprees, one is moved to root for him.

Guillot must kill the dragon. Despite his past disgrace, Guillot’s ancestral connection to the once victorious dragon-slaying Chevaliers makes him the only man to do it. By chance, he teams up with mysterious Solène, who’s hiding her magical powers for fear of persecution. They’re both nice and likeable and fit together well enough.

Hamilton spares the reader an obvious romantic storyline though one worries it’s forthcoming. In any case, Guillot and Solène’s story doesn’t quite achieve a fascination. If they were drawn out with fresher, less expected characterization, perhaps it would. Another problem is their nemesis Amaury lacks dimension as the power-hungry, ruthless bad guy. The result is an adventure story one feels has been recycled many times, and in this case, it’s so clearly derivative of the popular 1980s film with the same title, it feels especially disappointing.

Hamilton writes action sequences that snap and entertain, and Soléne’s use of magic, summoned from the world’s ethereal “Fount,” enchants through convincing, visceral storytelling. One appreciates the dilemma for Guillot and Soléne with the scheming Prince Bishop using their talents for his own gain while they’re tasked with doing the impossible. They face betrayals along the way, which provide the right inflection points. It’s just not new.

A good book for knight versus dragon diehards but perhaps not as much for fantasy readers looking to be transported to worlds not seen before.