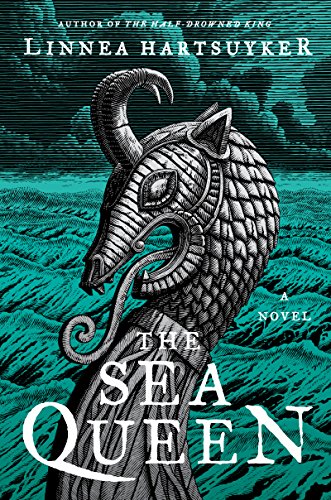 In her follow up to The Half-Drowned King, Linnea Hartsuyker continues her novelization of Snorri Sturlison’s “The Saga of Harald Harfagr” in an immaculately researched story that stands up to the work of the grande dames of historical fiction like Phillippa Gregory and Margaret George.

Contributing to an important and increasingly popular tradition, Hartsuyker’s The Sea Queen illuminates a lesser known female personage from ancient lore, and in this case a woman most readers have likely never heard of.

The Sea Queen is Svanhild Eysteinsson, sister to King Harald of Norway’s most trusted and accomplished sea captain Ragnvald, who was the principal subject of Hartsuyker’s début novel. Though devoted to her brother, Svanhild finds herself in the complicated situation of having fallen in love with and marrying a dissident adventurer Solvi Hunthiofsson, who is also a dangerous rival to the Norwegian king.

Svanhild and Solvi’s relationship runs hot and cold like many youthful marriages where attraction superseded companionability. It’s a constant power struggle between two strong-willed mates, and Svanhild is disenchanted with the idea of settling into the role of a traditional wife. She’s a young woman still searching for her place in the world. With Solvi, Svanhild found a passion to roam free, command battle ships, and travel to distant parts of the world.

Viking culture is an attractive milieu for exploring the historical nuances of gender roles. As a woman who can climb a mast and navigate storm-tossed waters, Svanhild is admired and sails and raids alongside her male peers. Her husband Solvi would rather have her join him on his adventures than raise children and keep their home on land. She can marry who she wants and later have sex with who she wants, and her brother values her opinion on how to manage his fiefdom perhaps even more so than his male contemporaries.

Still, in the realm of politics and law, patriarchal traditions prevail, and Svanhild’s privileged status is largely due to her father’s rank in society, and now her brother who succeeded him. Her physical beauty is also mentioned frequently.

Svanhild and Solvi’s marriage heads toward crisis when their only son becomes sick during a sojourn in the king-less, outlaw haven of Iceland. The boy was frail and sensitive to start, and Svanhild wants to remain with him landside so he can recover and grow into a realistic trade as a farmer. Solvi wants to toughen the boy up to learn how to become a sea pirate like himself. When Svanhild cedes to her husband’s wishes, a tragedy destroys their relationship, at least temporarily.

The Sea Queen is an epic story that includes many more rotating storylines including Ragnvald’s reluctant journey to help King Harald fulfill his prophecy of uniting a fractured Norway. Ragnvald wrestles with what he wants for his own future. As a second to Harald, he’s beholden to his king to carry out bloody campaigns, and he’s never truly free nor at peace at his home in Sogn for much more than a season.

Moreover, helping Harald bring law and order to Norway requires constant bargains that often leave no one truly happy as in the case of arbitrating a feud between his countryman Arnfast and an influential king Hakon whose son commits an unspeakable atrocity. Ragnvald’s judgment is fair based on norms of the time, but it leaves both parties scheming for their own sense of justice. As such, Ragnvald becomes an interesting, sympathetic character, having risen to a place where the friendships of his youth are stained by distrust and jealousy.

Hartsuyker renders ninth-century Viking living in vivid, sensuous detail from hot house baths to banquets of unusual foods to the stench of death in the aftermath of battle by spear and axe. The complex politics of a people bound by cultural tradition but less so by structured government is a fascinating theme and drives the narrative forward. Svanhild and Ragnvald contend with their positionality in a world of frequently shifting alliances and a loose sense of interdependence amid harsh conditions for survival, though their pursuit of personal fulfillment strikes a universal chord. It makes for compelling characters.

As an action-adventure story, the narrative occasionally falls flat, perhaps a causality of the author’s choice to stay loyal to the source material, which holds few surprises. Equally, the author’s style favors quiet moments of character development over dramatic plotting such that readers expecting epic scenes of sea battle and George R. R. Martin-style shocking twists may be disappointed.

Still, The Sea Queen will find enthusiastic fans in readers of the aforementioned Phillippa Gregory and Margaret George as well as fans of Viking history.