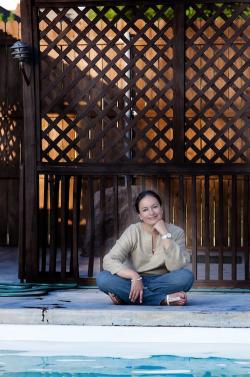 Nyla Ali Khan is a native of Kashmir and a native speaker of the Kashmir language. She is the author of two critically acclaimed books: The Fiction of Nationality in an Era of Transnationalism, in which she critiques the nostalgic support of subversive elements by the affluent diaspora from India, Pakistan, and Bangladesh. In her second book, Islam, Women, and Violence in Kashmir: Between India and Pakistan, she examines the seminal spiritual and political role of women in Kashmir, while also highlighting the plight of Kashmir generally as a gnarled bone of contention between India and Pakistan. This monograph is now used as a teaching text in several universities because of the growing interest in Kashmir.

Most recently Dr. Khan edited a major anthology, The Parchment of Kashmir: History, Society, and Polity, which develops an unparalleled understanding of the region’s culture, resilience, and fate as political pawn. Several reviews of the anthology have appeared in academic journals.

Her fourth book, which is a hybrid form of academic memoir and biography, on her maternal grandmother, Begum Akbar Jehan Abdullah, was released in June 2014 and is critically acclaimed as well. She is a regular contributor to Red Dirt Report Oklahoma, the Norman Transcript, the Oklahoma Observer, and the Edmond Sun. Her most recent book is Sheikh Mohammad Abdullah’s Reflections on Kashmir (Palgrave Macmillan, 2018).

She visits Kashmir frequently and has recently been active in giving lectures on the subject on Kashmir, reform in electoral politics in South Asia and the United States as well as the role of women in public life in the United States and South Asia at universities in Oregon, Maryland, California, Washington DC, and New York.

Dr. Khan's goal is to engage in reflective action as an educator working with diverse cultural and social groups questioning the exclusivity of cultural nationalism, the erosion of cultural syncretism, the ever-increasing dominance of religious fundamentalism, and the irrational resistance to cultural and linguistic differences.

Islam, Women, and Violence in Kashmir: Between India and Pakistan (Comparative Feminist Studies)

The Life of a Kashmiri Woman: Dialectic of Resistance and Accommodation

[(The Fiction of Nationality in an Era of Transnationalism)] [Author: Nyla Ali Khan] published on (August, 2005)

Kashmir has been a conflict zone since 1989. Nation-states have the power to nip idealism in the bud. Vested interests play a role in keeping conflict simmering.

This Is How We Rise: Reach Your Highest Potential, Empower Women, Lead Change in the World

“We’ve been given an incredible gift as sentient beings: by changing the inner attitudes of our minds, we have the power to change the outer aspects of our lives.