This Is How We Rise: Reach Your Highest Potential, Empower Women, Lead Change in the World 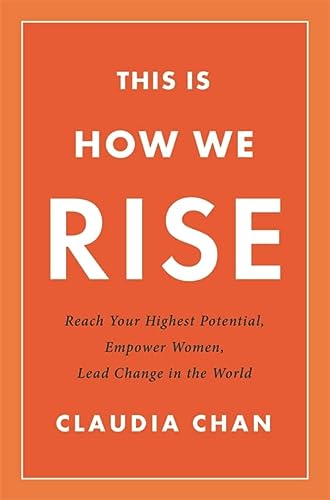 “We’ve been given an incredible gift as sentient beings: by changing the inner attitudes of our minds, we have the power to change the outer aspects of our lives. Thoughts are the most powerful tools we have. If you feed the beast (negative thoughts), he will thrive and expand. When you create the time and space to be alone with your thoughts, you discover, understand, and cultivate what’s already inside of you. Sometimes you just need to get away for that ‘me time’ and go somewhere quiet where you won’t be interrupted or distracted in order to find your inner voice. Think of it as a vacation for your mind.”

Reading Claudia Chan’s This is How We Rise: Reach Your Highest Potential, Empower Women, Lead Change in the World, allows one to recognize the significant role that this book can play in raising consciousness and in foregrounding the richness of rituals and practices that women can cultivate to silence voices of negativity, and instead cultivate “better mental and emotional habits.”

The practices and leadership pillars of purpose, vision, faith, resilience, energy, productivity, gratitude, grace, community, and self-love can create perceptible cracks in the edifice of iconicized womanhood and the figure of the “traditional Jewish,” “traditional Christian,” and “traditional Muslim woman,” which was similar to that of the Victorian woman as the upholder of the culture of silence.

Chan’s book makes a significant impact on consciousness, reality, and truth. Living from a place of self-worthiness empowers women to extricate themselves from the midst of monstrous structures and the agony that they cause in order to achieve the ideal of self-realization, which does not require self-mortification but the proverbial endurance of Sufi saints and prophets whose stories of forbearance, wisdom, courage in adversity, and inclusiveness strengthen faith. Even to aspire to self-actualization is a radical notion, particularly for a woman, in an age of stifling stereotypes, sociocultural mores, and political inequality.

Do we lay enough emphasis on how women of different political, religious, ideological, and class orientations can become resource managers and advocates for other women in emergency and crisis situations?

Although the international community made a commitment to incorporate gender perspectives in peace efforts and underscored gender mainstreaming as a global strategy for the growth of gender equality in the Beijing Declaration and the Platform for Action in 1995, is enough being done toward increasing women’s participation in peacekeeping and postconflict peace building and nation-building? Or are women conditioned to constrain themselves through core-limiting beliefs, which inhibit us from leading purposeful lives?

Most nationalist movements and literatures of independence have portrayed women as icons of cultural preservation. In the nationalist and postcolonial phase of nations, gender divisions have been reinforced by the hallowed figure of the “woman.” The complexity in the varying positions of women has been ignored to preserve nationalist portraits of the “woman,” which do not concede to the female subject the right to voice her thought, desires, ambitions, and political ideology.

Despite the encouragement of women’s education in several parts of the world, particularly in India and Pakistan, the womanly virtues of devotion, submission, chastity, and patience are still viewed as the social forms that tradition inculcated in women. Nationalist discourse creates a framework that confers upon women the pre-lapsarian mythological status of a selfless, asexual, benevolent, and maternal entity. Because the edifice of national culture was propped up by the ideals of purity, selfless love, and sacrifice, the decapacitation of women was the result.

This stereotypical portrayal of the “woman” in nationalist literatures limits her sphere of influence within folklore and social as well as political practices.

Through shifting into “states of relaxation, positivity, abundance, and success” without the veil of pre-conceived notions, we, multicultural, multinational, and multireligious women can de-emphasize the roles imposed by nationality and ethnicity in order to widen our identities without totally dismissing their cultural definitions. We can reach our full potential and locate the ability to make free choices and to act independently in a purpose-centric world created in the variability of spaces in which identity is formed.

Nyla Ali Khan is the author of Islam, Women, and Violence in Kashmir: Between India and Pakistan. Her most recent book is Sheikh Mohammad Abdullah’s Reflections on Kashmir (Palgrave Macmillan, 2018).