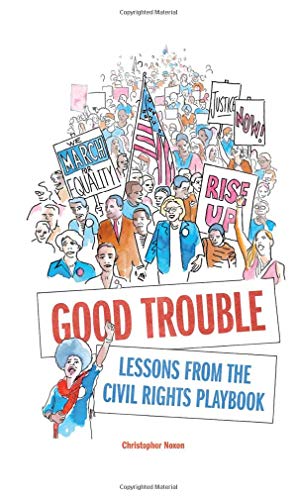 Kashmir has been a conflict zone since 1989. Nation-states have the power to nip idealism in the bud. Vested interests play a role in keeping conflict simmering. In South Asia and the United states young people the world over must engage in the processes of democracy and must acquire skills and knowledge that would enable them to effectively participate in decision-making and political processes, to recognize the importance of standing up and being counted as well as the value of the vote.

In order to improve the election process for the people of the United States, particularly millennials, to engage and encourage them to be informed and to vote, it is imperative to identify issues that are important to voters to inspire them to want to make a significant difference by voting and participating.

Politics should no longer be an abstract notion for young people, but a concrete method to bring about long-term reforms, which younger generations could build on.

In Good Trouble: Lessons from the Civil Rights Playbook, writer and illustrator Christopher Noxon compels the reader to ask whether the politics of the Civil Rights movement relevant today? Can the revival of the political ideology of Martin Luther King, Jr., John Lewis, Whitney Young, James Farmer, Roy Wilkins, Clarence Jones, and several unsung heroes of the Civil Rights movement compel millenials to recognize the influence that the local community can exercise, and to think constructively about change within organizations and institutions?

The motivation to create empire brought major parts of the earth under the domination of a few powers. These powers used violent, ideological, and cultural practices for disseminating the values that molded the racial and cultural identity of the colonizer as well as the colonized.

Western imperialism and colonialism were violent acts of acquisition that were supported by ideological notions of the superiority of the dominant culture and the purported imbecility of non-European cultures. This strategy created an unbridgeable gulf between the “center” and the “margin.”

Christopher Noxon vividly reinforces that the Civil Rights movement destabilized such dominant assumptions that were the foundation of binary structuration, which is the basis of the pattern of post-Enlightenment conquest and domination in human history. “Nonviolence,” as Noxon underscores, “is active. It requires training and discipline and self-policing.”

Although heroes of the Civil Rights movement—Fannie Lou Hammer, Ella Baker, Jennifer Epps-Addison, Rosa Parks, Charles Maudlin, and countless others—subverted binaries on which the dominant discourse and practices of American slaveholders and upholders of Jim Crow relied to validate their power, they did not create an inverse valorization of colonized/enslaved over colonizer/Jim Crow upholder. By breaking the shackles of traditional discourse, the aforementioned heroes of a mass movement articulated a submerged voice.

The sense of community that these activists had enabled them to employ individual assertion as well as cultural resilience as acts of resistance to the dehumanizing aspects of slavery, racism, and bigotry, through which they achieved self-definition in an imperial world order. Noxon quotes activist Michael Albert, who observed, “A contest of escalating violence is a contest we are doomed to lose. A contest in which numbers, commitment, and increasingly militant nonviolent activism confronts state power is a contest we can win.”

The strategic employment of the collective resilience of the “black” voice was an attempt to buttress the negotiation of activists of the Civil Rights movement with entrenched ideological structures. They did not nurture nostalgia for an Edenic Africa but, on the contrary, sought to forge a space for equality and justice within the available infrastructure.

They, as Noxon makes the reader aware, shook the moral fabric of “white” society by attributing “unchristian” and “uncivilized” behaviors to the representatives of the regime prior to and during the Civil Rights era: “Religion was undoubtedly a force for progress and freedom during the civil rights movement, transcending politics and drawing power from the deep spiritual traditions and grassroots organization of the church.”

Civil society and political institutions are closely interconnected. In order to create democracy, there must be a minimum of participation and adequate pluralism in a society. A consolidated democracy has to be open to diverse opinions; dissent and differences of opinion on policies is an important element of every democracy. In desanitizing the Civil Rights movement, Noxon’s Good Trouble: Lessons from the Civil Rights Playbook is a call to address this issue across the nation.

We could do with the resurgence of such politically and morally discerning as well as self-constructed individuals in the current era of violent polarization—an era in which human rights and values have been rendered defunct. Again, Noxon jogs the reader’s memory by quoting Dr. Martin Luther King Jr.:

“In the final analysis . . . all life is interrelated. All humanity is involved in a single process, and all men are brothers. . . . When I am commanded to love, I am commanded to restore community, to resist injustice, and to meet the needs of my brothers.”

Nyla Ali Khan is the author of Islam, Women, and Violence in Kashmir: Between India and Pakistan. Her most recent book is Sheikh Mohammad Abdullah’s Reflections on Kashmir (Palgrave Macmillan, 2018).