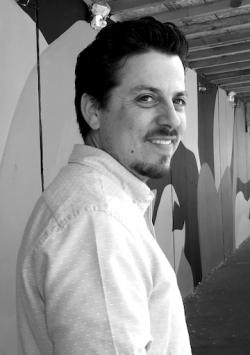 Maceo Montoya is a novelist and visual artist based in California. His paintings, drawings, and prints have been featured in exhibitions and publications throughout the country as well as internationally.

Mr. Montoya’s first novel, The Scoundrel and the Optimist (Bilingual Review, 2010), was awarded the 2011 International Latino Book Award for “Best First Book” and Latino Stories named him one of its "Top Ten New Latino Writers to Watch."

In 2014, University of New Mexico Press published his second novel, The Deportation of Wopper Barraza, and Copilot Press published Letters to the Poet from His Brother, a hybrid book combining images, prose poems, and essays.

The following year, Montoya’s novella and story collection, You Must Fight Them (University of New Mexico Press, 2015), was a finalist for Foreword Reviews’ INDIEFAB Book of the Year Award. His latest publication, Chicano Movement for Beginners, is a work of graphic nonfiction.

The Scoundrel and the Optimist

The Deportation of Wopper Barraza: A Novel

Letters to the Poet From His Brother

You Must Fight Them: A Novella and Stories

Kafka in a Skirt: Stories from the Wall (Camino del Sol)

“brimming with verve and wisdom.”

Where We Come From: A novel

“This novel’s greatest strength is the simplicity of its message: two boys who grew up in such different worlds playing soccer in the backyard and sneaking off to eat raspas offer us a grea

“for lovers of literature and students of the craft, reading Sergio Pitol is to enter one of the great literary minds of our time.”