Where We Come From: A novel 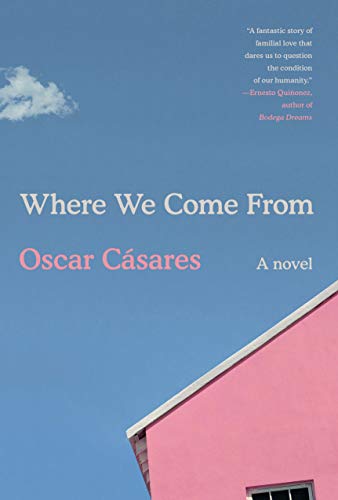 “This novel’s greatest strength is the simplicity of its message: two boys who grew up in such different worlds playing soccer in the backyard and sneaking off to eat raspas offer us a greater path forward than walls and barbed-wire.”

Rolando Hinojosa, a native of Texas’s Rio Grande Valley and one of the godfathers of Chicano literature, reflected on the importance of a sense of place: “. . . my stories are not held together by the peripeteia or the plot as much as by what the people who populate the stories say and how they say it, how they look at the world out and the world in.”

Oscar Cásares’ fiction traverses Hinojosa’s same valley, starting with his critically acclaimed first book, Brownsville, a collection of stories in which the mostly Mexican American characters unapologetically inhabit their Faulknerian “postage stamp of native soil.” They leap off the page because the reader is forced to accept them as they are, not as those outside the borderlands might wish to understand them culturally or geographically. Cásares knows intimately how his characters look at the “world out and the world in,” shedding necessary light on a region that is too often defined by politician soundbites or ignored and forgotten altogether.

In Where We Come From, Cásares returns to Brownsville, but the fault lines have shifted; his characters are no longer as sure of their footing, their sense of place has been shaken, an unease perhaps reflecting the increasing divide between communities on the U.S. Mexican Border.

Separated by a bridge, Brownsville and Matamoros have been pushed apart because of cartel violence and heightened border security. A generation ago, community members on both sides of the border crossed back and forth with ease. Now the characters in Cásares’s Brownsville live as though in a police state, cooped up in their homes, trapped by their fear and suspicions, feeding off their memories of what once was or past hopes of what could’ve been.

The novel centers on Nina, a lonely older woman and sole caregiver for her ailing mother, who finds herself embroiled in a smuggling operation when her Mexican housekeeper, Rumalda, asks her to hide her daughter and granddaughter for a few days in the guesthouse in the backyard.

The simple favor snowballs when the smugglers coerce Nina into renting them the place to use as a drop house while their human cargo await the next stage of their journey. Between caring for her mother, cooking for two dozen migrants, and attempting to keep her brother Beto from discovering the operation, Nina is at her wits’ end, afraid that any moment she’ll be discovered and hauled off to jail.

Eventually the migrants are transported to their next destination, and Nina learns that the smugglers have been arrested. Her reprieve is short-lived, however, when one of the migrants, a young boy from Veracruz named Daniel, escapes his captors and finds his way back to her house seeking refuge. Unable to turn him away, Nina promises to hide him and help locate his father.

To complicate matters, her 12-year-old godson Orly comes to spend three weeks with her. The previous year, Orly’s mother died suddenly from a brain aneurism and his father, Eduardo, is now dating another woman and traveling for work. He wants his youngest son, raised in an affluent Houston suburb, to experience Brownsville as he experienced it growing up. He hopes it’ll make Orly tougher. The problem is Brownsville is no longer a place where a young kid can just go off on his own, so Orly is stuck with Nina, just as Nina is stuck caring for her mother.

There is symbolism here—the breakdown of trust, our tribal mentalities cordoning off our already isolated lives—but although both Orly and Nina’s interior worlds are richly detailed with reflection and flashbacks, the fact that they rarely leave their limited confines means the reader is stuck with them. Nina’s home becomes a kind of fortress under siege. Colorful secondary characters (and action) come to the house—the nosy Beto, the villainous smugglers—but then they leave, taking the tension with them as they go. Orly does sneak out and has a wild adventure, but he returns all too quickly and without mishap.

Some of the novel’s most poignant moments appear in the form of italicized passages detailing the lives of immigrants who come into contact with the story’s principal characters, usually through their labor—Nina’s maid, the man who brings Orly’s father room service, the gardener, even Orly’s favorite middle school teacher, Mr. Dominguez, who is approached by ICE when they come looking for his boyfriend, Julian.

“The problem was, his work visa had expired ten months earlier. . . . It was enough for them to take him. In another two weeks Mr. Dominguez will be deported back to Veracruz, still without knowing where Julian might be.” What’s revealed are the countless, hidden, heart-wrenching stories that surround us every day. Cásares powerfully individualizes and humanizes their experience, showing their complex wants and desires, their fears, not just as immigrants, but as mothers and fathers and lovers.

Despite Nina’s efforts to hide Daniel from Orly, the two boys eventually meet and become friends. Unlike Nina, whose fear of breaking the law wracks her with guilt, Orly’s response to Daniel’s predicament is purely human. Why must Daniel live in fear? Why does he have to hide?

Orly “wants to know what it’s like to be illegal not because you’re doing something you’re not supposed to, but only because you want to be with your family and because they want to keep you safe.” The sad truth, of course, is that Orly’s innocence demonstrates a wisdom that will forever elude our politics of fear. This novel’s greatest strength is the simplicity of its message: two boys who grew up in such different worlds playing soccer in the backyard and sneaking off to eat raspas offer us a greater path forward than walls and barbed-wire.