Kafka in a Skirt: Stories from the Wall (Camino del Sol) 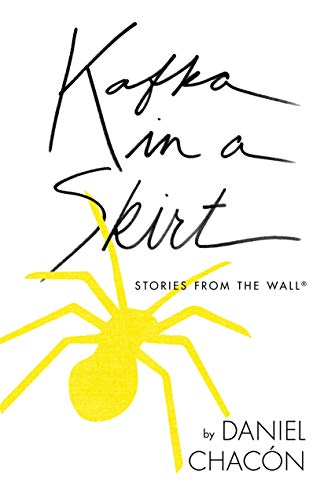 “brimming with verve and wisdom.”

In Daniel Chacón’s short story “Running Through a Museum,” a Chicano artist tells his daughter how he fell in love with her French-Arab mother in Europe: “I don't remember what outdoor market it was or what city we were in, just me and her walking in the market. Many of my memories of her are made up of blurry scenes, streams of swirls and shapes and colors, like running in a museum.” The quote is a fitting introduction to Chacón’s superb new collection of stories, Kafka in a Skirt: Stories from the Wall. His writing is like that outdoor market in a country or city that can’t be remembered. Some stories are sharp, delineated and whole, others are blurry and elusive, the effect akin to running in a museum full of shapes, colors, and intrigue.

Although the collection’s subtitle Stories from the Wall can be read as a reference to the U.S. Mexican border, and many of the stories do take place in El Paso, Texas, more often the borders are metaphorical. Chacón revels in cultural and linguistic disjuncture. In “Lady of the Silver Lake,” he describes the pitfalls of a Russian tourist learning about “Chicanos” via Google, or in “Yi Vut Lo Purke,” the challenges of expressing love in a language with 35,000 conjugations of a single verb.

The subjects and characters in Chacón’s stories are wide-ranging, but a thematic unity brings them together: how language sows confusion (in sometimes colorful, hilarious ways); how literature can transcend and transform (and obsess us); and how identity is forged as much by one’s past as by simple desire—the desire to love, to understand, or to be a part of something greater than oneself.

Chacón’s stories are loosely connected, but the reader always has the sense that his characters could run into each other, that they might occupy the same space (live in the same apartment building, for instance), or that their backstories are intertwined. In one of the longer stories, “The Enchanted Tiki Room,” a character actually runs into versions of his past and future selves at Disneyland. It’s an engrossing meditation on our dashed hopes and desires and how those longings continue to shape us.

The collection is bound by intention: We have passed through the mirror, or the wormhole, collapsing time; we are within Chacón’s “The Wall,” a vast cloud-like storage system holding all of our data, and that data, as Chacón demonstrates, can be revelatory for those with the patience to sift through it; and lastly, in the title story “Kafka in a Skirt,” we have accepted the invitation to a fancy, mysterious breakfast that might last hours. These scenarios are Chacón’s hints at how to read his work, how to understand the collection’s underpinnings, but they’re also the author’s way of encouraging his readers to delight in their own stories, from the mundane to the dream-like.

Chacón has no qualms about identifying as a Chicano writer. In “The Hidden Order of Things,” he offers us a path to contextualize his work: “This is a work of Chicano literature. Most readers will know that before they buy the book or before they open it, and Chicano literature is one of the fibers of the Latinx literary fabric.”

At the same time, Chacón has created a universe all his own. Beginning with Unending Rooms: Stories (Black Lawrence Press, 2008) and Hotel Juarez: Stories, Rooms, and Loops (Arte Público Press, 2013), Chacón has refused any boundaries on what Chicanx fiction should look like. Yes, he’s interested in identity and his stories explore what it means to straddle cultures, nations, languages—all very Chicanx themes—but he pushes these concepts further, beyond the limiting dichotomy of Mexico and the U.S., Spanish and English, brown and white.

Chacón’s work reflects a marked difference from most Latinx books published by mainstream publishers, whose focus remains stubbornly sociological, e.g. immigrant struggles or first generation caught-in-between stories. Chacón’s characters are largely Latino, but they march to their own drumbeat, such as Eddy in “Bien Chicano” who, instead of bringing tacos or nachos to a culturally themed potluck, prepares a tray of bologna sandwiches on Bimbo white bread as a true reflection of his upbringing—this is Chicanx fiction that seeks an honest reckoning with authenticity.

In Chacón’s earlier collection Unending Rooms: Stories, he ends with an essay, “Borges and the [email protected] (in b flat),” that addresses the insecurities of the Chicano writer. He reflects on his own isolation and comes to understand that while he may not fully belong in any of the worlds he moves (from the barrio to academia), he does fully and wholly belong in the world of literature, the “place where language is made.” Not all writers are created equal, but one thing they all share—from Chacón to Borges—is the ability to “enter the unending rooms of [their] imagination.”

Kafka in a Skirt builds upon this idea. Chacón is a Chicano from Fresno with working class roots who now calls the borderlands home; he’s also a globetrotting international writer who delights in metaphysics and literary play, ushering readers from one dimension to another. His stories are a dynamic reflection of this balancing act, each one brimming with verve and wisdom.