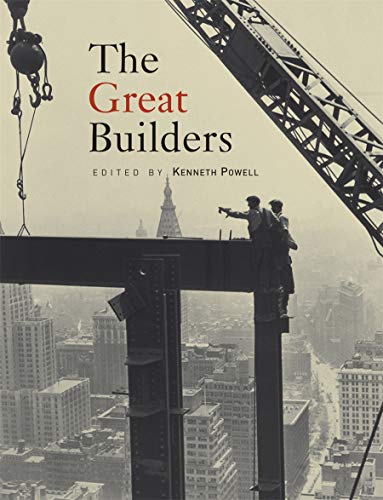 “. . . the wise reader will tough it out, because taken as a complete work, the story that these 40 anecdotes tell is captivating. And the variations in the style of the writing only confirm that one of the more fascinating aspects of building through the ages is the interplay of poetry and pragmatic science.”

The history of architecture isn’t just about the buildings. Somewhere behind the scenes, or in front of them, there are intriguing people imagining, planning, designing, and guiding. We know these individuals as architects, engineers and builders, but these distinctions are fairly recent and are not always clear.

In The Great Builders, editor Kenneth Powell presents brief biographies of 40 of these men (alas, they are all men), each written by a knowledgeable academic, architect, or engineer, and each outlining the extraordinary contribution that each has made to the history of building.

It’s a difficult task to condense the life’s work of an architect like Frank Lloyd Wright or Le Corbusier into a single chapter with a handful of pictures and 2,000 words. There are probably 2,000 books written about these two geniuses. So what can one say that makes sense and doesn’t trivialize the subject? The book’s essayists have addressed the problem in a variety of unique ways, weaving each Great Builder into the overall fabric of the development of building materials and technology, and to the tide of architectural movements, stressing the relationship between technology and aesthetic ideals.

As the pieces of the larger story unfold, other themes are revealed. The roles of architect and engineer were not separated until well after the Renaissance. The account of their gradual reconciliation and cooperation makes a fascinating tale, involving as many engineers and builders as architects.

As part of the general blurring of distinctions between engineering and architecture, many other skills are also involved. Typical of early engineers and architects, and common among practitioners even today, is the remarkable prevalence of polymathy—the mastery of many skills.

Filippo Brunelleschi, the book’s first subject, was expert in mathematics, science, literature, mining, fortifications, theatrical machines, and amphibious boats. Sir Christopher Wren, anatomist, astronomy professor, and “England’s most famous architect,” had no architectural inclinations at all until he was in his thirties. Joseph Paxton, the creator of the Crystal Palace, was a skilled gardener and student of mechanical systems.

Men such as Hennebique and Gustave Eiffel pioneered the delicate art of international practice, in an age when inter-office travel might take weeks. Innovators like Frei Otto and Buckminster Fuller were very early champions of what we now call sustainable design.

In any compendium like this, the reader is subjected to a constant shift in writing styles. In stark contrast to the poetry of James Campbell’s Sir Christopher Wren, Jordi Oliveras’s Antoni Gaudí, and Robert McCarter’s Louis Kahn, there is the academic factuality of Sussan Babaie’s Qavam al-Din Shirazi and the pedantic descriptions in Ricardo Dirindin’s Pier Luigi Nervi (“The surfaces are traversed by an articulated pattern of ribs based on the isostatic curves of primary moment,” we are told).

But the wise reader will tough it out, because taken as a complete work, the story that these 40 anecdotes tell is captivating. And the variations in the style of the writing only confirm that one of the more fascinating aspects of building through the ages is the interplay of poetry and pragmatic science.

Given this fact, there are a few anomalies in the book. Few would argue that Frank Gehry deserves to be included in any discussion of 20th century architecture, but his inclusion (in an essay written by the editor himself) seems out of place here. Writing about Kenga Kuma and making reference to Gehry’s world-renowned Guggenheim Museum in Bilbao, essayist Botond Bognar, criticizes Gehry’s contribution when he writes that the “Bilbao effect” generates “twisted, contorted and seductive—yet too often empty architectural images.”

Other inclusions in the book are inspired and refreshing: Sinan, Mengoni, Melnikov. But the reader is tempted to second-guess the selection process. Why is Brunelleschi included but not Bramante? Where is Andrea Palladio? Is there no room for the great planners of the 19th century: Daniel Burnham, Otto Wagner and Baron Haussmann? And where are innovators such as Geoffrey Bawa and Hassan Fathy?

Mr. Powell devotes his final chapter to Japanese architect Kengo Kuma, who rejects the “obsession with willful imagery, excessive visual rhetoric and vapid form making for its own sake” and declares “I want to erase architecture.”

Since The Great Builders makes a convincing argument for the importance of structure in architecture, this seems a fitting conclusion. At the book’s beginning, there was no architecture per se, only a desire expressed by a scattered group of thinkers, painters and inventors to make fine buildings that would proclaim mankind’s rightful place at the center of the universe. Now, 600 years later, with the universe still expanding, there is an urgent focus on making architecture conform to nature’s rules.