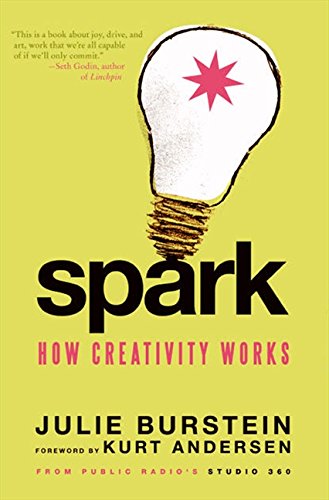 You’re blocked again. Your deadline is approaching, and inspiration is nowhere in sight. You’ve read the paper, scanned the TV listings, eaten all the yogurt in the fridge and still: nothing.

Not an uncommon problem. Creative inspiration is elusive. But, as you will discover in this fascinating book, it may not be far away. It could be just beyond your reach or somewhere within you already, waiting to be uncovered. It might even appear spontaneously once you dig into the project, because, amazingly, if you don’t find your inspiration, it’s always possible that it will find you.

In Spark: How Creativity Works, radio producer Julie Burstein presents a collection of fascinating stories, or “case studies” based on years of interviews with well known and ought-to-be well known artists, who reveal the sources of their inspiration. If you’re looking for a do-it-yourself inspiration guidebook (Inspiration for the Uninspired?), this isn’t it. It’s doubtful that such a book could even exist. Instead, Burstein lets her creative subjects tell their own stories, in their own words, leading readers to find their own inspiration. Is “Spark” the right word? Is creativity a vast tinderbox or powder keg just waiting to be ignited? Or is it something else: a warehouse, an open field, the product of friendship, a long bout of adversity? As Julie Burstein points out, it is all of these things and much more.

As you start to read the stories in Spark, you will quickly discover that inspiration is personal. No two artists find the creative spark in quite the same way. There are enough common threads that Burstein is able to sort the stories into categories, under chapter headings such as “Engaging Adversity,” “ Going Home,” “Reweaving a Shattered World.” Chapters include artists from very different fields, but the stories gain extra impact by being juxtaposed. Readers will undoubtedly find some stories particularly inspiring. Some may resonate with the readers’ own personal experiences: an event, a relationship, a frame of mind. There are sources of creative inspiration that seem unremarkable in most respects—even banal —and there are stories that seem more likely to stifle creativity than to generate it.

In some of these stories, incredible adversity has been converted into a source of creativity. The novelist Richard Ford reveals that, as a dyslexic child, he found reading extremely difficult—surely not an auspicious beginning for a writer. He learned to read properly in his early twenties but, even now, finds it helpful to read his work aloud. It’s an intense, time-consuming process, but the result is a particular musicality in his use of language that distinguishes it.

The painter Chuck Close offers an even more extreme example. Due to a learning disability and vision problems, Close developed a distinctive painting style that, in effect, allowed him to see the world more clearly, while sharing the vision with others. A paralysis that left him wheelchair-bound at the age of 48 provided no deterrent to his output at all, even though it necessitated holding the paintbrush in his teeth or strapping it to one of his arms. As Close says, inspiration often simply requires that you “show up and get to work.”

The limits of human endurance can provide another unlikely source of inspiration. Hardship, intentionally imposed, may set the stage for unexpected forms of expression. As a self-described “action architect,” choreographer Elizabeth Streb combines the ideas of Merce Cunningham with those of Evel Knievel. Her choreography demands that her dancers, who are complicit in the exercise, test their physical and psychological limits. In one such test, one of her dancers performed (and survived) a belly flop—falling and landing face down on stage—from the incredible height of 25 feet. “They’ve developed a technique to land with their ribs pulled in, so that they don’t break,” Streb helpfully explains. For any comparison with this limit-of-endurance motivation, you really have to look to athletic competition: rugby, possibly, or maybe this is why those other brave individuals are called “mixed martial artists.”

Another endurance test of sorts is the exploration of ugliness. Although Ms. Burstein doesn’t dedicate a chapter to this form of inspiration, it is a recurrent theme in the book. How could ugliness not inspire the creative among us? If it’s beauty we seek, ugliness must be acknowledged. Interviewer Kurt Anderson asks photographer Joel Meyerowitz, “[I]s there a problem, given the subject matter? To show something so ugly in such a gorgeous fashion?” The subject matter in question is the World Trade Center site, which Meyerowitz started documenting shortly after 9/11. The photographer’s response is complex and compelling, involving the healing effects of time and the role of imagination in reconstructing what has been lost.

Echoing this theme, Landscape architect Julie Bargmann’s industrial landscapes and photographer William Christenberry’s images of “old junk” don’t merely create pleasant compositions from unattractive or unremarkable subject matter, they evoke memories of the past. To appreciate what is, the audience must follow the artist’s journey into what once was. (Absent from the book, but not the discussion, is the work of Ed Burtynsky, whose spellbinding photographs document the willful destruction of our own planet.) Inspiration must sometimes be sought in unlikely places. As Joel Meyerowitz puts it, “Do you come into a place like that with a preconceived aesthetic approach, or do you let that place tell you how the content should be described?”

Ms. Burstein’s chapter “Creative Partners,” dealing with collaborative creativity is not only the longest but possibly also the most thought provoking and the most urgent for our times. As individual consumers of art, most of us prefer to imagine that works of art come from a single creative mind. The one-on-one of audience-to-artist makes the exchange feel personal. But the tormented-genius model doesn’t serve the creative professions very well.

A case in point is the architectural profession, where collaborative effort is a contemporary necessity. The husband-and-wife team of Denise Scott Brown and Robert Venturi has been a formidable professional partnership with a truly cooperative design approach for half a century. But having this approach recognized has been a problem, and the worst offenders appear to be other architects. Unrecognized by the AIA Gold Medal committee despite repeated nominations, Scott Brown says, “They [the AIA] have said that an idea can only originate in one mind, and seem to feel that their medal—and respect for design in architecture—will be debased if the recipients are not individuals.” This outdated attitude (and architects who support it) only helps to perpetuate the unflattering ivory tower mystique that gave rise to such grotesque caricatures as Ayn Rand’s Howard Roarke.

In a more surprising example of collaborative inspiration, we learn that composers Phillip Glass and Steven Reich, sculptor Robert Serra, and multi-media artist Michael Snow once had a day job operating a small moving company together in New York. Although this is not held up as an artistic collaboration, it’s hard to imagine that it could be otherwise. Each of these artists has produced impressive works, but in most cases, it has been with the cooperation of other artists: the composers with musicians and choreographers, Serra with architects such as Frank Gehry and Michael Snow with a long list of other artists.

There is an odd anomaly that may strike readers a few pages in: Ms. Burstein discusses works of art, frequently in great detail, but never shows them. Even work that would be very easy to print—a poem or a photograph—is described rather than presented. This is at first a little annoying. Do we have to go online and find these things ourselves? But frustration soon yields to understanding. If the work were to be presented, the focus would on the result and the discussion of the creative process would get left behind. Burstein has wisely chosen to stay focused on the creative, rather than the created. As a result, readers may begin to compile a short list of artists whose work they would like to explore further, now that they know what motivated it. Even if you think you are familiar with an artist’s work—Chuck Close, Richard Serra, David Plowden, Mel Chin—you may find new appreciation and want to view as much of the work as possible.

The interviews are well guided and the stories are well told and edited. What is less helpful is the intrusion of the author’s own reflections and experiences at the beginning of each chapter. We are brought back to earth repeatedly by being reminded that the stories are the product of a radio show, PRI’s “Studio 360,” to the point that, at times, unfortunately, the chapter introductions read like commercial spots. It seems a common failing these days, when “[e]ven biographies are not merely about their subjects, but their authors encountering their subjects.” (Brian Brett Brick 86, winter 2011) The inclusion of the first person singular is a technique that works well in radio, which is where these stories originated and where it’s only wise for the host to build long-lasting audience fidelity. But in a book it is simply distracting.

However, when the reader is immersed in Ms. Burstein’s stories, there is magic on the page. The reason is simple: Inspired people are very often inspiring people.

Novelist Chimamanda Ngozi Adichie says, “The essential gift is to be open to wonder and to let that wonder spark your creativity.” Spark is a book that simply had to be written and Burstein’s own inspiration is easy to discern: the stories are too amazing and inspiring not to be widely known and each story, each creative “spark,” is a small work of art in itself.

There’s a more pragmatic way of finding inspiration that is best expressed early in the book by Chuck Close:

“If you wait for the clouds to part and be struck on the head with a bolt of lightning, you’re likely to be waiting the rest of your life. But if you simply get going, something will occur to you.”

Inspiration is invaluable, but the search for inspiration, may be overrated. Don’t forget, “genius is one percent inspiration, ninety-nine percent perspiration.” So if you’re waiting for it to arrive, you may be just procrastinating. There is work to be done. Get on with it. Stop reading.

Gordon S. Grice is an architect, illustrator, writer, and the editor of more than a dozen books on the subject of art, architecture, and design. He also edits and writes for Perspectives, the quarterly journal of the Ontario Association of Architects. He is a Fellow of the Royal Architectural Institute of Canada, a Senior Advisor and Past President of the American Society of Architectural Illustrators, and Creative Consultant to Forrec, a multidisciplinary design firm specializing in entertainment environments.