The Embodied Image: Imagination and Imagery in Architecture 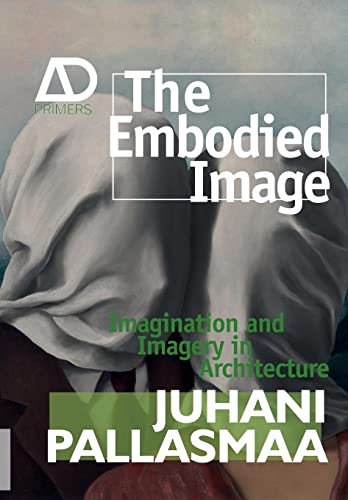 “Mr. Pallasmaa’s architectural journeys are all the more valuable because they are so uncommon. . . . These are brave journeys into terra incognita . . . [that] will give you a new understanding of the importance and delight of architecture.”

If you’re not an architect, you may be unfamiliar with the name Juhani Pallasmaa, and that’s a great shame. His work is full of ideas about architecture that are important to everyone, and that even many architects don’t fully grasp. If you simply have a deep interest in architecture, whether you are an architect or not, this book like Mr. Pallasmaa’s previous books, will only increase your affection for the subject.

In The Emodied Image, author Pallasmaa takes on the task of returning the image to its roots in imagination. As visual artists, photographers, architects, and professional designers, many of us are conditioned to automatically assume that the word image means visual image. So dominant is the visual sense in our appreciation of the world that we consciously and subconsciously file our impressions as visual images—in our scrapbooks, diaries, sketch books and in our “mind’s eye.”

In previous books, Mr. Pallasmaa has argued for the acknowledgement of a more physical, sensory involvement with architecture. Here, within the constraints of text and visual imagery, he removes the word image from our visual cortex and relocates it in our bodies, in our subconscious minds and in familiar objects around us. Of Mr. Pallasmaa’s three recent Wiley titles, this book is probably the most cerebral, even though the subject itself is pointedly non-cerebral.

In The Eye of the Skin, Mr. Pallasmaa explores the “dominance of the visual realm,” in our current discussions about cultural phenomena, but especially about architecture, where the word image most frequently refers to a graphic representation. Based on purely visual images, in the professional world, commissions are granted, competitions are won, firmly held opinions are formed and profound discussions are conducted. But architectural images, Mr. Pallasmaa argues, involve all the senses. The importance of this discussion in architecture cannot be overstated in a digital age, when the visual reigns supreme.

In The Thinking Hand, Mr. Pallasmaa extends the discussion to include the making of visual imagery using primarily the creative hand, but more particularly, “the unity of mind and body” to develop drawn images that are necessary in the creation and discussion of architecture. In the final chapter, Emotion and Imagination, he introduces the role of imagination and its connection with the image, a word with which it shares a common root. He points out that “mental images are registered in the same zones of the brain as visual perceptions, and that these images possess all the experiential authenticity of those perceived by our own eyes.”

In The Embodied Image, Mr. Pallasmaa picks up where The Thinking Hand left off: How are image and imagination connected? Where the earlier books regarded bodily sensations and “embodied wisdom,” this book tackles the origins of images. What you see is not what you get.

“The image, in its simplicity, has no need of scholarship. It is the property of a naïve consciousness; in its expression, it is youthful language.” —Gaston Bachelard, The Poetics of Space

What exactly does Mr. Pallasmaa mean by embodiment? Maurice Merleau-Ponty offers an example, referring to embodiment in painting: “Quality, light, colour, depth, which are there before us, are there only because they awaken an echo in our body and because our body welcomes them.” Later, Mr. Pallasmaa explains, “Architectural images, as all poetic images, obtain their mental impact through emotional and embodied channels before they are understood by the intellect.”

So there is a latency within us: images that are only made apparent when they are stirred by a stimulus beyond our cognition. But embodiment is a coin with two sides: while our latent images are waiting to be awakened, there are other images embodied in the things we perceive around us.

As examples of this, Mr. Pallasmaa offers ten “primal images of architecture:” floor, roof, wall, door, window, hearth, stair, bed, table and bath.” These are images rather than things because they “are acts rather than formal entities or objects” which “permit and invite;” in other words, they have an impact on our feelings and behavior that goes beyond their obvious primary function.

Once you take the step of cutting image loose from the realm of vision, and from conscious perception at all, it seems to follow that these images exist somewhere. It’s Mr. Pallasmaa’s delightful task to point us to where these images lie embodied and for us to awaken them in our own experiences.

“A building is encountered, not only viewed; it is approached, confronted, entered, related to one’s body, moved about and utilised as a context and condition for activities and things.”

Central to the experience of the embodied image is the fact that, despite visual dominance, all of the human senses are engaged. As noted, this topic is explored at great length in The Eyes of the Skin. Here, Mr. Pallasmaa stresses the importance of the imagination in this interaction. In “. . . painting, architecture and dance, the factual sensory imagery of the work gives rise to an imaginative level that constitutes the poetic and affective reality of the work.”

When author Pallasmaa describes the qualities of certain materials, he uses words in a way that appeal very strongly to the non-visual senses. “Brick makes one think of earth and fire, gravity and the ageless traditions of construction.” There are forceful intimations of smell, texture, heat and weight. When you think of glass, you may think in terms of shininess and transparency, but for Mr. Pallasmaa, “Being a supercooled liquid, glass evokes images that are closely related to those of water.” “There are,” he continues, “great poets among glass designers, artists architects and engineers, all capable of imagining enchanting dreams in glass… able to express the multiple essences of the material, its simultaneous brittleness and malleability, hardness and fragility, immateriality and solidity, heaviness and weightlessness.”

But for Mr. Pallasmaa, whether architecture is an art, or even “the mother art,” as Frank Lloyd Wright claimed, is not a question that needs to be asked or answered. Architecture is an experience—an act—that shares with “other” art forms an important quality: “Profound artistic images are not singular pictures, snapshots, confined views, aspects or details; they are entire worlds.”

To help define these worlds, throughout the book, Mr. Pallasmaa presents illustrations in pairs: two works of visual art or a visual art image next to an architectural photograph. Placing Caspar David Friedrich’s Woman at a Window, for instance, adjacent to a photograph of an Antonio Gaudí fireplace demonstrates how primary architectural images—window and hearth—can be evoked in surprising and inventive ways. Friedrich’s painting embodies many strong characteristics of the window: light, transparency, boundary, prospect and the draw of the infinite. In contrast, the fireplace calls up welcome, shelter, warmth and intimacy. Through these subtle comparisons, Mr. Pallasmaa shows that art forms such as sculpture, painting, and architecture can often reveal the world by using the embodied image in surprisingly similar ways.

One of the most fascinating aspects to Mr. Pallasmaa’s writing is his frequent apparent tendency to digress. Inevitably, the “digression” is simply an unexpected, more informative, certainly more interesting and, ultimately, more direct path toward making his point.

A particularly interesting digression deals with the science of neurology. This topic is not at all peripheral to Mr. Pallasmaa’s discussion, but it may take the reader by surprise. There is really no reason in the world why an average artist or architect would need to know anything about neuroscience. Yet, as Mr. Pallasmaa points out, our nervous system plays a huge part in our interactions with our environment, so you will discover that the work of Semir Zeki probably affects you more than you can imagine. And the book entitled The Architect’s Brain: Neuroscience, Creativity and Architecture, by IIT Professor Harry Francis Mallgrave, is something that you may actually decide to rush out and buy.

Another apparent digression that is central to Mr. Pallasmaa’s discussion is the subject of contemporary architecture. Whatever your feelings about the brave new architectural world might be, Mr. Pallasmaa’s argument is refreshing. The affection that contemporary architecture has toward sophisticated technological solutions has the force of distilling and often abandoning recognizable imagery. For example: “The very transparency of the contemporary door diminishes its image power; presence has turned into absence, solidity into transparency. . . . This disappearance of doorness is an example of the dilution of architectural images, and the loss of their deep primal contents which is taking place in the modern world.”

Inevitably, Mr. Pallasmaa draws a connection between our current hunger for domination and what some theorists refer to as “strong” imagery, as compared with “weak or fragile” architectural imagery. Strong imagery seeks to impress us with powerful and clearly defined forms, devoid of emotional appeal. But in fragile imagery, there is a call to the senses that may require “prolonged empathetic looking and understanding.”

Mr. Pallasmaa’s preference is clear, and it’s significant that this argument is presented in the closing pages of the book. No one would argue against modern technology as a means of addressing modern needs, especially urban needs. But an important aspect of architecture is being diluted, overlooked and possibly abandoned. And to some extent, we are allowing the seductive novelty of new technologies to remove us from the realities of life.

Mr. Pallasmaa’s architectural journeys are all the more valuable because they are so uncommon. While other architectural thinkers offer their services in advancing, updating or overthrowing existing theories, Mr. Pallasmaa presents important new ideas by exploring tangential fields of thought and drawing them into the realm of architectural and aesthetic theory. Human sciences, philosophy and ideas—popular and unpopular—borrowed from other artistic fields all form appropriate raw material for Mr. Pallasmaa’s voyages of discovery.

These are brave journeys into terra incognita, and it can be unsettling at times to follow him. But the discoveries and revelations that you will encounter along the way will give you a new understanding of the importance and delight of architecture, whether you are an architect by training or simply by inclination.