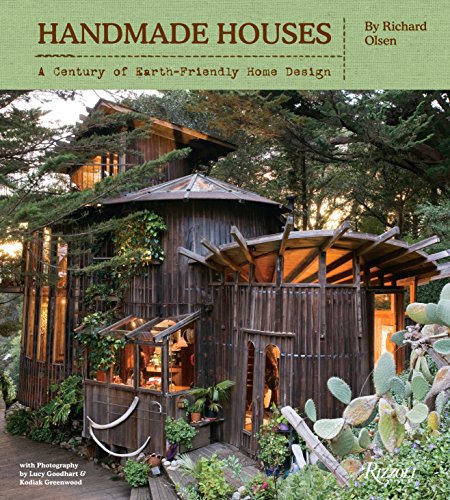 “The handmade home is the oldest form of building and also the most personal. In Handmade Houses: A Century of Earth-Friendly Home Design Richard Olsen has presented a valuable survey of the development of this building type over the past 75 years. The book is beautiful, informative, and beguiling.”

The “handmade house” has only recently become a novelty. For many thousands of years, all houses were handmade. Then with the large-scale urbanization of the Industrial Revolution and the postwar tract housing, individual designer-builder-owner homes became quaintly old fashioned.

In the 1960s, a shelter rebellion—encouraged by publication of Bernard Rudofsky’s Architecture Without Architects (1964), The Whole Earth Catalogue (1968), and several other books to which Richard Olsen refers—spawned a back-to-the-earth rebellion and handmade houses became a way of declaring one’s decision to drop out.

This time period, roughly the 1960s and ’70s, which occupies much of Mr. Olsen’s book, has a special resonance today because once again the earth is calling us back. Seemingly out-of-control technology and ineffective government regulation is endangering our fragile ecology and the construction industry bears a great deal of responsibility.

Today’s “green revolution” in housing really began in the handmade houses of 50 years ago.

What Richard Olsen has assembled is an attractive and engaging book, suitable for coffee table, bookshelf, or drawing board. Through interviews, research, and the collaboration of his photographers Lucy Goodhart and Kodiak Greenwood, he has created a beautifully tactile storybook about a passion to build.

“We were just swept away with the joy of building,” designer-builder Deva Rajan says of his Canyon, California home, to which he dedicated ten happy years. Handmade Houses is Mr. Olsen’s similarly passionate collection of stories about Rajan and many others.

On the subject of hardship, we are forced to acknowledge a degree of risk in creating architecture that is spontaneous rather than planned, constructed “mostly outside of building codes” or with building codes that are “lenient” and feature vast volumes of wood. Devastating fire plays a role in several stories, although no loss of life is reported.

Many of the houses have been designed, built, and occupied by the same person or persons, but this is not always the case. What distinguishes these houses from the ones most of us live in is:

(1) The spontaneity of their construction—construction drawings, if they exist, are intended as a rough guide only;

(2) the reverence for the land that they sit on—none of these buildings are urban infill projects;

(3) the extensive use of recycled material—timber from demolished bridges, shipping dunnage, driftwood, “lost logs,” wine vats, glass from military vehicles, and stone excavated from the site itself or left in place and built around;

(5) a devotion to the craft of building; and

(6) a deep affection for the inconvenience and quirkiness of nature.

Some of the houses went up relatively quickly, others took decades. Of his own house, begun in 1950, designer-builder Emile Norman said, “I think it’s almost finished now. Not quite, but almost.” That was in 2006 and Norman, at 91 years old, was still building.

It seems appropriate to consider the physical qualities of Mr. Olsen’s book, given its subject matter and the fact that printed books today are required to justify their unfashionable physical existence. Handmade Houses doesn’t disappoint.

The design work of Lynn Yeamans is quirky and contemporary, but has a handcrafted feel. The almost square format with its oddly shrunken jacket creates a contrast between the printed cloth cover and the captivating jacket photograph. The heavy semi-gloss pages and luscious high-resolution photos are far superior to anything likely to appear on your e-reader or monitor any time soon. The book’s use of texture as a printed background for titles and image captions is a nice touch but is perhaps a little overdone—at times, the captions are nearly impossible to read.

Despite the beauty of the photographs and the fluidity of the prose, it would be nice to see a few design or construction drawings. Mr. Olsen’s written descriptions strain to describe a complex form, volume, or floor plan, where an architectural drawing might explain it clearly and, one suspects, beautifully.

In the Villa Karim, a Sardinian home crafted by Savin Couëlle, we are told that drawings were done, but they served as only a “jumping-off point.” If the finished house is any indication, what gorgeous documents they must have been—and what an added dimension of understanding their inclusion would have built.

The rich amber and warm grays of untreated, unpainted wood fill the pages of the book. There are unmilled lumber, tree-trunk columns with the bark still on, chain-saw-carved doors, slabs, twigs, limbs, and trunks used as rafters, beams, and furniture. Mr. Olsen quotes a young boy who, after visiting the San Diego area house of James and Ann Hubbell, wrote a thank-you note, saying “Mr. Hubbell makes houses that trees aren’t embarrassed to stand next to.”

The handmade home is the oldest form of building and also the most personal. In Handmade Houses: A Century of Earth-Friendly Home Design Richard Olsen has presented a valuable survey of the development of this building type over the past 75 years. The book is beautiful, informative, and beguiling.