Our Encounters with Evil: Adventures of Professor J.T. Meinhardt and His Assistant Mr. Knox 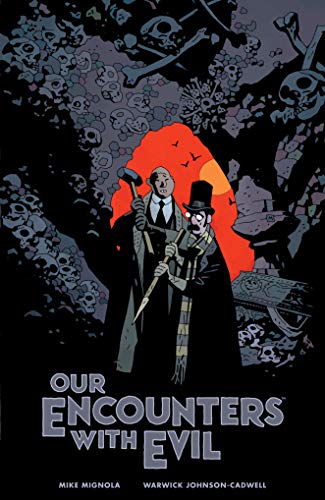 “Our Encounters with Evil is ageless fun. It is a graphic novel that is serious about horror but does not take itself seriously. . . . a wonderful addition to the ever-expanding Mignolaverse . . .”

Comic book writer and artist Mike Mignola is best known as the pen behind Hellboy. Few outside of the hardcore funny book crowd know that Mignola is also the author and caretaker of his own “Mignolaverse”—an enchanted land wherein diverse characters taken from disparate graphic novels interact with one another.

Hellboy and the BPRD (Bureau for Paranormal Research & Defense) are at the center of this fictional universe, and they are orbited by such characters as Captain Henry Baltimore (a hard-boiled former British soldier-turned-vampire hunter), Lobster Johnson (a Depression-era masked crimefighter), and Sir Edward Grey (Queen Victoria’s personal “witchfinder”). Professor J. T. Meinhardt and his assistant Mr. Knox are two more specimens of the Mignolaverse, and Our Encounters with Evil puts them front and center in a collection of short, sanguine, and slightly humorous monster tales.

Written and drawn by Warwick Johnson-Cadwell, Our Encounter with Evil is set in the legend-haunted land of the Carpathians, and almost all of these stories feature stereotypically gothic contrivances. “The Death of Lady Ruthven” features a wagon chase scene reminiscent of the climax of Bram Stoker’s Dracula, even down to its Eastern European setting.

“The Lost Duke Kurtz” returns to the theme of vampires, albeit in a rather unusual way. In this tale, the professor and Mr. Knox do little to defeat the vampire-tyrant Duke Kurtz; fellow vampires of the village of Lodzarak have already taken care of the matter by sealing Kurtz inside of a shrinking silver tomb. Despite this act of charity, the vampires of Lodzarak still drink blood. They do make a point to Meinhardt and Knox that: “We drink our fill, but . . . the people that come here are criminals and villains, escaping retribution for their own misdeeds.” ’Tis a win-win, you see.”

The first two stories of this collection prominently feature certain themes that are found throughout the entirety of Our Encounters with Evil. Much like the rest of the Mignolaverse these tales abound with clever literary references. Lady Ruthven’s name is taken from John Polidori’s “The Vampyre,” which is often characterized as the first vampire story in the English language. As for Duke Kurtz, his cruelty is similar to the fellow who shares his surname in Joseph Conrad’s Heart of Darkness.

Johnson-Cadwell’s art is imbued with dark hues and scratchy lines. His writing, on the other hand, is sharp. His humor cuts through in “Blackwater,” where a coalition of vampires fail to make the world’s most evil monster because two of their members, Earl Cannon Taganrog and Devilt Pietros, cannot get past their bitter rivalry. “Siegfried” upends the gothic tradition by making the vampire hunters the prey of a clever werewolf, who is a hunter of vampire hunters.

Our Encounters with Evil is ageless fun. It is a graphic novel that is serious about horror but does not take itself seriously. This slim volume is a wonderful addition to the ever-expanding Mignolaverse, and it is fine for those seeking something similar to the occult action of Hellboy, but with more charm and aristocratic breeding.