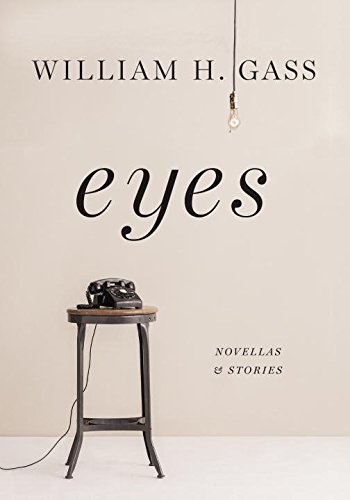 William Gass is known and admired as a writer’s writer for his handsome, challenging, and experimental prose and as a misanthrope for his tendency to focus on his characters’ moral shortcomings. The two novellas and four short stories in Eyes show his prose virtuosity and his dim view of human nature undiminished at age 91.

At times Gass’ prose is stunning and throughout requires alert and focused reading. While emphasizing his characters’ personality flaws—most employ ugly racial epithets when referring to African Americans, including the antebellum “darkie,” perhaps as a device warning readers to keep an emotional distance from the characters—Gass also gives them qualities and enthusiasms that the author shares. The protagonists in both the novella “In Camera” and the short story “The Man Who Spoke with His Hands” discuss aesthetics, visual and musical respectively, at length and appear to share or reflect their author’s passions and taste.

The book opens with “In Camera,” which is set in a fine art photography gallery in a run down neighborhood of an unnamed middle American town or city. Much of the novella consists of philosophical dialogues in which the proprietor, Mr. Gab, and his physically deformed protege, employee, and informally adopted son referred to at first as “You stupid idiot,” then shortened to “U-Stu,” and later still “Mr. Stu,” discuss photographic aesthetics, including the superiority of photography to painting, and black and white photography to color.

Gass (himself an accomplished photographer) in the voice of Mr. Gab riffs on his favorite photographers and employs his verbal dexterity to develop pictures in prose. U-Stu's remark about how his physical appearance drives away other pedestrians calls to Mr. Gab’s mind Brazilian documentary photographer Sebastiao Salgado. Note how in this excerpt Gass repeats the word “picture” in lieu of commas to slow the reader and force her to read more attentively:

“Should Salgado—u Stu u—Mr. Gab rejoins, should he then forget his skills and just picture pain  picture evil picture human greed picture desolation picture people other people have allowed to become battered trees made of nothing but barren twigs, picture many murdered, meadows murdered, hills heaved into the sea, sand on open eyes, the grim and grisly so that it approaches us the way you do on the street, so we will look away, even cross against traffic in order to avoid any encounter, . . .”

The novella’s dramatic tension resides in the knowledge that Mr. Gab’s prized photography collection includes stolen works he has fenced, that law enforcement may eventually catch up to him, and that Mr. Stu, who is wholly dependent on Mr. Gab, knows no other life and has no other source of livelihood.

The second novella “Charity” is a 70-page single paragraph stream of consciousness obsessive rant and the part of Eyes that demands the most focused and attentive reading. The protagonist Hugh Hamilton Hardy is a Washington, DC, health company’s receipts attorney whose job as an enforcer is to demand payment and accept no excuses, while in his private life he is beset and besieged by panhandlers and correspondence from people and organizations requesting charitable donations.

Most readers to a greater or lesser extent also find themselves discarding letters, deleting emails, and screening phone calls from charities without obsessing over it, but Hardy also receives letters from strangers asking for assistance, and compassion fatigue causes him to view trick or treating children as extortionists among whom he especially resents African American children:

“Darkies came in dreadful droves to mug the smug in their suburban enclaves. They didn’t even costume up or anything, just collected candy, keeping the economy healthy, their presence menace enough; what would we do without the poor to engage the gears? Yet what have we left them? Only a sweet tooth with which to bite down on their stale little pittance.”

The sheer volume of requests for assistance make Hardy wish for government intervention. “In Bologna, Hardy believed, charity was better managed because the Communists didn’t permit poverty. In a just society generosity would be unnecessary. But our society was just social.”

He also suspects that beneficence is counterproductive. “So giving charity or getting it: which did more harm? It certainly perpetuated problems, rewarded failure, indolence. How to keep the homeless homeless: feed them.”

Hardy is in a sexual relationship with a woman named Molly that he also sees as transactional except that he is the supplicant and she bestows favors. The two roles, receiver of sex and of requests for assistance, alternate in his cognitive riffs.

“Molly was not an appropriate name for the Cleopatra whose breasts she permitted him to heft. A holy office. Raising the fatty chalice to his lips. The Salzburg Seminar wanted him to support it, The Folger ditto. Anywhere you had ever been became an endangered place; everything you did incorporated itself as a not-for-profit foundation in need of funds; every Cause followed you with open envelope. Dear sir . . . sir. She offered herself—should he say?—fulsomely.”

Gass' dark yet playful levity continues in the short stories. The first two are in the voices of inanimate objects, the piano on the set of the movie Casablanca in “Don’t Even Try, Sam,” and a metal folding chair used by customers waiting their turn in a barbershop in “Soliloquy for a Chair.”

First among the overly literal racist piano’s complaints is that Dooley Wilson, the actor who played the pianist Sam, wasn’t a pianist, “the worst was when I realized this darkie couldn’t play me. . . . I heard he specialized in Irish songs sung in whiteface. . . . Jews were doing Nazis liked they wished they were. So why not a darkie who can’t dance.”

He parodies the film’s famous song: “Disremember this, a hit is like a miss, on squat you can rely . . . our fundaments get spry as time goes by.” Of the movie itself, “the production stumbled toward the truth of what they were trying to do—achieve a perfect mix of chauvinism and schmaltz.”

Unlike the piano, the folding chair doesn’t care about the race of the human sitting on him (the chair prefers the masculine pronoun), only the person’s size and weight. At night the chairs are moved to the back room for poker games during which the chair chats with the chips. “Boy, do they know a thing or two. As for me I keep my lid on.”

The chair compares the abuse chairs suffer at the hands of humans to that of the natural environment. “It is no matter with men what damage they do, . . . They murder the ground they walk on—it’s all right—so why should we chairs complain about a rusty pinion, a small tear, some slight impulsive knockabout?”

Like the protagonist of Gass’ 2013 novel Middle C (also reviewed in NYJB) the title character of the third story “The Man Who Spoke with His Hands,” Arthur Devise, is a music professor at a small college in Ohio. Like that novel and the novella “Eyes” the story is in part a vehicle for Gass’ discourses on aesthetics, petty academic rivalries and departmental politics. Like the novellas the narration is in the third person.

We return to first person narration in the final story, “The Toy Chest,” which at times is reminiscent of the childish voice in the opening pages of James Joyce’s Portrait of the Artist as a Young Man, and includes typographical errors and extra spaces between words, but with the jaded perspective of an adult. The male narrator’s reminiscences of childhood include his favorite toys such as the model train set he was only allowed to assemble and play with once a year during the winter holiday season.

He also played with other children, including a girl from Sunday school. “The problem was I wanted to play doctor; she wanted to play church, . . .” The boy’s view of religion is amusing:

“Easter was a funny day. You were given   candy in a nest of shredded cellophane because God’s son, after he was murdered by a cloud of thrown stones, pushed away a few rocks from the cave where he was hiding and displayed his organ in an unfurling of raincoat.”

Short form suits Gass’ poetic prose, which concision intensifies, and “The Toy Chest” also includes lines of verse. Eyes is enthusiastically recommended to readers who enjoy dense prose and experimental fiction; the attentive reading it requires is amply rewarded. As a bonus the book includes reproductions of works of art by photographer Michael Eastman and painter Michael Hafftka.