Another Kind of Eden 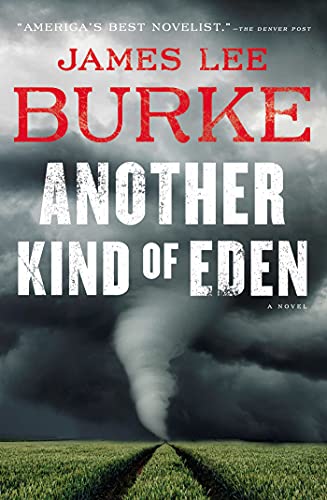 “Another Kind of Eden is a challenging tale by an accomplished master of crime fiction.”

James Lee Burke is an icon of American crime fiction. His Dave Robicheaux series, set in Louisiana, shot him to the top of the charts as the third novel in the series, Black Cherry Blues (1989) won an Edgar Award. He’s also been awarded a John Simon Guggenheim Fellowship for Creative Arts in Fiction (1988) and the Grand Master Award from the Mystery Writers of America (2009).

Burke has also written a number of novels with a historical foundation, drawing on his own family history and figures drawn from the past. The Holland family saga has covered several characters over the course of the years, including Texas lawyer Billy Bob Holland; Billy Bob’s cousin, Texas sheriff Hackaberry Holland; and the latter’s grandson Hackaberry Holland, a Korean War veteran and sheriff.

His new novel, Another Kind of Eden, set in 1962, features another family member, Aaron Holland Broussard. Aaron is an itinerant farm worker and former college instructor, a sort of Woody Guthrie type riding box cars with a beat-up guitar and a duffel bag, finding work where he can get it. He’s written a novel, but it hasn’t been published. He’s about to start another one.

Ending up on a farm outside Trinidad, Colorado, he forms a strong attachment to Jo Anne McDuffy, a young aspiring painter with a dark vision, brooding personality, and mysterious attachments to her college art instructor and a wandering bus full of drug-addled hippies.

The fly in Aaron’s ointment, unfortunately, is that he’s a Korean War veteran who suffers from post-traumatic stress disorder. His symptoms include blackouts, memory loss, and anger spikes. Combined with a town full of corrupt and violent citizens and a serial killer preying on local women, Aaron’s volatility, his love for Jo Anne, and his strong moral code form a recipe for trouble.

Burke tells his story in something of a stylistic pastiche. His descriptions of the landscape and Aaron’s longing for a lost paradise echo John Steinbeck, Thomas Wolfe, and William Faulkner, while his dialogue, particularly when Aaron clashes with local villain Rueben Vickers and his son, Darrel, has a distinct Raymond Chandler/Ross Macdonald hardboiled tone to it.

However, it’s difficult to know exactly how to approach this novel. Fans of Burke’s crime fiction will be pleased with Aaron’s darkness and with Wade Benbow, a chewed-up local detective who’s battling cancer and personal loss while trying to keep the peace and track down a murderer. Those interested in historical fiction will appreciate his portrait of rural and small-town Colorado in 1962 as drugs begin to enter the region, along with the dissolute culture and depressing loss of life that go along with them.

However, beyond the historical element and the crime fiction slant, the ending of the novel will cause problems for many readers.

On the night of the story’s climax, as Aaron and Jo Anne drive to Ludlow, a ghost town in the foothills of the Sangre de Cristo Mountains that was the site of a labor-related massacre in 1914, the darkness morphs into palpable evil.

An eyeless hooded figure looms in the headlights. Lightning splits a tree in half. Dead people appear at the side of the road, watching them pass. Later, when they reach their destination, stick figures crawl among the rocks, and winged creatures flick through the darkness overhead.

Booklist has noted in their pre-release review of this novel that “incorporating elements of horror into otherwise realistic thrillers is a thing these days.” While that’s certainly the case, with this month’s release of The Noise by the James Patterson book machine as a notable example, the horror aspect of Another Kind of Eden takes us in a different direction than The Noise’s Walking Dead-style nonsense.

Driving to Ludlow and witnessing all these horrifying things, Jo Anne turns to Aaron and says, “Do you think this is hell?” Aaron recalls his father once saying to him, “‘Hell is more than half of paradise, Aaron. So we should take no joy in the destruction of the Eden that was given us.’” Burke clearly proposes that the evil encountered by Aaron in this story has converted his longing for Eden into an acknowledgment that hell most certainly does exist on this earth.

Here we move from a “realistic thriller” onto the more literary plane of allegory, and this is how the ending must be read if it’s to be understood at all. Aaron refers several times to “Young Goodman Brown”; Hawthorne’s dark, brooding story is one of the finer examples of allegory in American literature. Burke clearly wants us to enter this frame of mind as we read the conclusion of his novel.

Once we’ve made this decision, we inevitably begin to think our way backward through the story, wondering just how much of the novel overall should be read as allegory, rather than historical fiction or crime fiction or (shudder) a “mashup” of the aforementioned.

Motivation enough, certainly, to read it again from the beginning with a different eye.

Another Kind of Eden is a challenging tale by an accomplished master of crime fiction. Fans of James Lee Burke will need to curb their expectations before reading this one, because their author has more in mind for his story than might meet the eye on a superficial level.