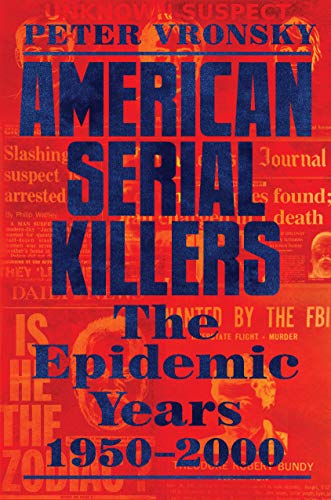 “The final and most unnerving assertion of American Serial Killers is the author's belief that the United States is on the cusp of a new age of murder madness.”

As horrific as it sounds, true crime authors and others believe there was once a “golden age” of serial killers. This particular epoch began after World War II and reached its zenith during the 1980s. Peter Vronsky chronicles this blood-drenched era in American Serial Killers: The Epidemic Years, which intersperses recounts of the crimes of some of America’s most infamous serial killers with commentary on the nature and causes of serial murder.

Addicts of true crime (more popular than ever, despite the lack of major contemporary serial killer cases in the U.S.) will be intimately familiar with some of the killers profiled in this book. Names like Jeffrey Dahmer, Dean Corll, Ed Gein, and Richard Ramirez have entered the everyday lexicon of Americans, many of whom can recount some of the gorier details about the depraved acts of these monsters. Lesser-known serial killers, from the Coast Fiend of 1930s San Diego to Harvey Glatman, aka the “Glamor Girl Slayer,” are also profiled in Vronsky’s near-encyclopedic work.

American Serial Killers also recounts the oft-told story about the formation of the FBI’s Behavioral Science Unit (BSU), which later became the Behavioral Analysis Unit (BAU), and the work of G-men like Robert Ressler, Roy Hazelwood, and John “Mindhunter” Douglas. Vronsky is no fawning fan of the FBI however, and he actually ends this book with an indictment of the ViCAP (Violent Criminal Apprehension Program) as “a joke” that only “provided analytical assistance to local cops just 220 times” in 2014. ViCAP was supposed to be the major data center designed to help local police departments deal with the major influx of cross-state serial murderers in the 1980s. Today, it is nothing compared to Canada’s better-funded and more active ViCLAS (Violent Criminal Linkage Analysis System) of the Royal Canadian Mounted Police (RCMP).

American Serial Killers is primarily a retread over common ground. True crime enthusiasts and devotees of murder will not find much new in this book other than a few names that have slipped through the cracks of serial killer fandom.

Where this book offers new insights is in Dr. Vronsky’s suppositions about what caused the serial killer epidemic in the first place. Namely, Vronsky cites the massive trauma of the Great Depression and World War II.

Often, the serial killers of the 1960s and 1970s were the sons of World War II veterans, who were themselves already hardened individuals owing to their experiences with poverty and parental abandonment during the Depression. When these fathers came home in 1945, they often became sullen drunks or violent authoritarians. These men struck out at their boys, who in turn came of age in Vietnam. One serial killer, Arthur John Shawcross, blamed his experiences in Vietnam for his homicidal pathology. While Shawcross almost certainly exaggerated the brutality he witnessed in Southeast Asia (Shawcross’s Army record indicates that he saw no combat), Richard Ramirez, alias the Night Stalker, was inculcated toward violence by a relative who showed him gruesome photos and trophies taken from his time as a Special Forces soldier in South Vietnam.

The other major element that Vrosnky believes created what he calls “diabolus in cultura” was the popularity of men’s adventure magazines, most of which regularly featured images of bound and tortured women on their covers. Many serial killers grew up as avid consumers of said magazines, such as Dennis Rader, better known as BTK. Vronsky believes that these magazines crafted a popular “rape culture” wherein young men in the postwar years came of age swimming in fantasies of sexual violence.

The final and most unnerving assertion of American Serial Killers is the author's belief that the United States is on the cusp of a new age of murder madness. Deadly crime is already on the rise in most cities, and Vronsky warns that the “familial traumas of the financial crisis of 2008,” the long wars in Iraq and Afghanistan, and the forced lockdowns and deaths of COVID-19 will all create a new diabolus in cultura that will impact us in dangerous ways. This is the dire warning that closes out a well-researched and engrossing book.