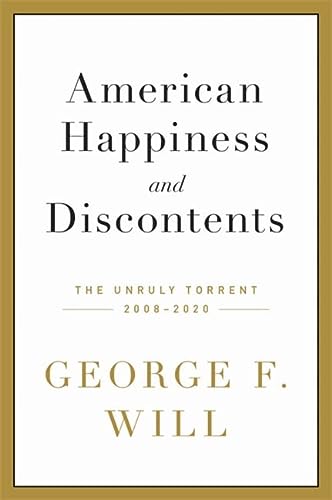 “These columns, written between 2008 and 2020, are written mostly with the same elegance, persuasiveness, and lucidity that have marked Will’s long career as one of the nation’s most perceptive political commentators.”

George F. Will has been writing about politics, history, culture, and the world for more than five decades. American Happiness and Discontents is the eighth collection of his columns, mostly written for the Washington Post, where he is one of that paper’s few conservative voices. These columns, written between 2008 and 2020, are written mostly with the same elegance, persuasiveness, and lucidity that have marked Will’s career as one of the nation’s most perceptive political commentators.

Conservatives will like his praise of Calvin Coolidge, Ronald Reagan, former Supreme Court Justice Antonin Scalia, Ulysses S. Grant, his late friend and colleague Charles Krauthammer, and William F. Buckley, Jr., who hired Will to write for National Review in 1973.

Readers will enjoy his tributes to the winning baseball ways of Yogi Berra, the brilliant singing of Frank Sinatra, the political toughness of Margaret Thatcher, the modest benevolence of Gerald Ford, the prudent leadership of George H. W. Bush, and the devoted watchfulness of Nancy Reagan.

As he notes in the introductory chapter of the book, Will has spent most of his adult life in Washington, D.C., and in some respects that fact has colored some of his judgments in ways that may perplex conservatives.

Will for one thing appears to be out of touch with, and repulsed by, the growing populism of the conservative movement and the Republican Party. Today’s conservative populism, he writes, is fueled by “a pandemic of right-wing pessimism, predictions of America’s doom unless unambiguously unconstitutional measures are taken to combat secularism.” He senses the growth of conservative “authoritarianism” by Americans “in the grip of cultural despair.” And his animus toward former President Donald Trump is palpable.

Ironically, conservatives who read Will’s scathing columns on the dismal state of culture, the media, and academia in the United States will have good reason to despair. He is harshly and rightly critical of the “1619 Project” that defines the nation’s founding by slavery. He repeatedly scolds our institutions of higher learning for abandoning their commitment to scholarship and teaching, which, he writes, have been largely superseded by a focus on “diversity,” “speech codes,” “social justice,” and eliminating “rape culture.”

On abortion, Will identifies the “pro-abortion” Democratic Party as the extremists and the “science deniers” for refusing to acknowledge that each abortion takes a human life and that science, not religion (Will is an unbeliever), dictates that we should protect the unborn. He calls convicted murderer Dr. (and abortionist) Kermit Gosnell a “serial killer,” and criticizes the media for mostly ignoring Gosnell’s trial and Hollywood for boycotting the movie about Gosnell’s crimes. And in one of the most moving columns in the book, Will celebrates the life of his Down syndrome son in the context of lamenting the widespread abortion of Down syndrome babies both in the U.S. and abroad.

Will, consistent with most conservatives, is skeptical of the climate change alarmists and ecological doomsayers, champions the free market, and notes the many failures of socialism. But in opposition to other conservatives he argues against capital punishment, disagrees with lengthy prison sentences for juvenile murderers, believes that our criminal justice system incarcerates too many criminals (“the scandal of mass incarceration”), and thinks that prosecutors have unfettered power.

Surprisingly, Will also appears to side with those liberal jurists and law professors that view the U.S. Constitution as a “living” and “evolving” document.

Finally, there is very little in this book about foreign policy, which is surprising given the rising tension between the US and China. Will was a staunch Cold Warrior and most of his previous collections of columns had significant foreign policy sections. He does in one column call China a “revisionist power,” and urges US policymakers to openly arm and support Taiwan. We can expect more of this in his next collection.

Will notes that his interest in writing was inspired by reading columns by Murray Kempton in the New York Post. He described Kempton’s writing as “trenchant elegance,” and it is clear that is what Will aspired to—and for the most part has achieved. And one senses that this may also have something to do with Will’s hatred of Donald Trump.

Because it is Trump’s style, not his policies, to which Will objected, and yet for Will, it seems, style triumphed over substance. Will opposed Trump in 2016 and again in 2020, despite the fact that Trump’s opponents (Hillary Clinton and Joe Biden) favored policies that Will opposes. Will left the conservative-leaning Fox News and began to appear regularly on MSNBC—a network that stands for everything Will is against, except Donald Trump. This has led some conservatives to abandon George Will—to view him as irrelevant to the contemporary conservative movement. As most of the columns in this book show, that would be a mistake.