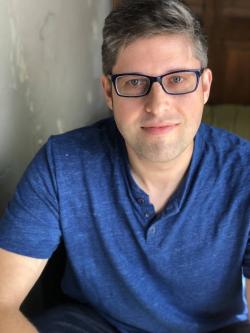 David James Poissant is the author of the novel Lake Life (Simon & Schuster, 2020), a New York Times Editors' Choice selection, Publishers Weekly Summer Read, and a Millions Most Anticipated Book of 2020. His story collection The Heaven of Animals was a winner of the GLCA New Writers Award and a Florida Book Award, a finalist for the L.A. Times Book Prize, and was longlisted for the PEN/Robert W. Bingham Prize.

His stories and essays have appeared in The Atlantic Monthly, The Chicago Tribune, The New York Times, One Story, Ploughshares, The Southern Review, and in numerous textbooks and anthologies including New Stories from the South, Best New American Voices, and Best American Experimental Writing. His books are currently in print in six languages.

He teaches in the MFA Program in Creative Writing at the University of Central Florida and lives in Orlando with his wife and daughters.

The Heaven of Animals: Stories

“Rarely does this novel read like correspondence. The prose is too fine, the settings too detailed, the pacing exquisite.”

The Scapegoat: A Novel

“it is in the quietest moments that this novel finds its greatest strengths.”

Life Among the Terranauts

Following her 2011 debut collection, This Is Not Your City, and her 2019 novel, The Vexations, Caitlin Horrocks returns with a stellar second story collection, Life Among the