Life Among the Terranauts 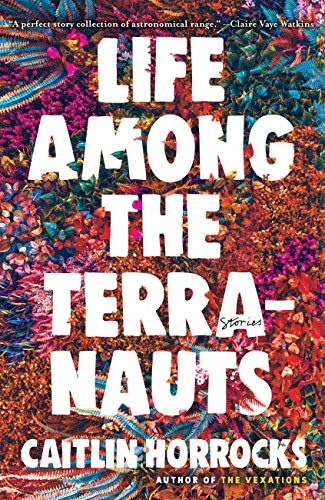 Following her 2011 debut collection, This Is Not Your City, and her 2019 novel, The Vexations, Caitlin Horrocks returns with a stellar second story collection, Life Among the Terranauts.

Horrocks is a fan of narrative voices that set the reader at ease from the opening line. “Daisy picking daisies, is how it all started,” the collective narrator of “Better Not Tell You Now” tells us, while “23 Months” begins: “I met this guy at a party, is what happened.” The narrators throughout the book, whether singular or plural, though often first person, come to feel familiar, like old friends. Even an unfamiliar voice reads like a friendly stranger sidling up to you at a bar.

But any breeziness is eventually undercut by an insidiousness lurking at the heart of each story, as these narrators tell you their deepest secrets—a teacher who wishes she’d murdered a student; a woman who escapes, then returns, to an abusive relationship; a father who abandons his son in order to become a real estate agent—and you feel lucky for the telling.

Horrocks proves herself a master of locating the identity of a place, evoking tone, and summoning a character with a single, authenticating detail. In “Sleep,” arguably the collection’s strongest story, Horrocks achieves all three with the outrageously efficient line: “He was the senior everyone called ‘college material’ until he decided to stay, and then we called him ‘ours.’”

Or consider the economy of language deployed to render the town’s financial situation: “The public library was housed in the old pharmacy building; we checked out our books at what used to be the prescriptions counter and bought our prescriptions thirty miles down the road.”

“Sleep” is not a story about a library or a drugstore, but that’s not the point. Horrocks has charted the town’s economic rise and collapse, in concrete terms, in a sentence. Few writers have this power. Fewer still channel it reliably, story after story, without fail. Better yet, the author has imagined a delicious setting, a defunct drugstore where people check out the latest Grisham, but she has resisted the urge to write a story around it. One writer’s premise, after all, is another’s throwaway detail.

“Sleep” is, in part, the story of Al—an inventor, recent widower, and father of two precocious children—whom we see through the townspeople’s eyes. The town is bemused to learn that, rather than endure the typical wintertime routine, Al plans to hibernate through the season: total isolation. Before long, though, the whole town gets in on the trend.

Given the tale’s collective telling and near-fabulist conceit, one faces the temptation to reduce the story to metaphor, and more than one reviewer won’t be able to resist the temptation to link the story to the quarantine and social distancing of 2020 and 2021. But the story’s center isn’t located quite so simply. “Sleep” is neither parable nor fable nor cautionary tale, and its meaning refuses to stand still and have its pockets emptied out.

Whether what these characters do is “healthy”—a word that pops up, here, in the mouth of Dr. Joe, a Dr. Phil stand-in, then later in the story “Sun City,” coded, both times, as shorthand for pop-psychology TV speak more than sound mental health advice—is relative. Some characters hibernate five months a year and emerge better for it, rehabilitated, their lives on track. Others lose themselves in sleep, or else use sleep to sidestep the problems of their waking lives. Sleep itself, in the end, is less to blame than people, people less to blame than chance or, if one will, God.

In “Teacher,” we return to the arbitrary nature of fate. As the story’s narrator, a lifelong elementary school teacher, tells us of herself and her colleagues: “we’d . . . known crooked kids who’d turned into straight arrows, or at least into adults who held down jobs, went home and watched TV, and didn’t throw bricks off overpasses. We’d known sweet kids who went the other way. Life is long and strange and none of us sees what God does.”

Here are characters at the mercy of an unseen God, and the God of these stories is capricious. At its haunting end, “Teacher” becomes an exploration of the philosophy that all students can be taught, as well as the indoctrination that it is a teacher’s moral obligation to save each and every one. As a brilliant counterpoint, the teacher is placed in conversation with a friend in the medical field who long ago accepted the fact that not every patient can be saved, one who is better able to do her job as a result of accepting this unfortunate truth.

The collection brims with other standout stories. “Chance Me,” a tale of love, arcology [sic], and a sting operation tied to a take-down documentary of New England college admissions procedures, is so ambitious, so ripe for expansion, that a follow-up novel feels all but inevitable.

Then there’s “On the Oregon Trail,” a love letter to the 1985 Apple II Minnesota Educational Computing Consortium video game. This story is that unusual chocolate in the box, the one with coconut and orange peel, which some leave untouched and some swear by. “The graves were endless,” the narrator tells us of her Oregon Trail journey, failing to recognize that the journey is steered by middle schoolers.

“Toot, JoJo, Boogerface. Here Lies a Dork. The children had no sense of solemnity. They read them all, howling: Farty McButt Farts Oxen. Turd Is Dead HAHAHA.” The story is only five pages, but it’s no gag. It is nothing short of a Donald Barthelme-level meta masterpiece, with an inevitable jolt of sincerity at the end. And even if the jokes land only with those ages 30-45, gentle reader, I swear to you, the story’s inclusion will have been worth it. In the shadow of 2020, we must make allowances for all laughs, no matter how clever or inside-jokey they may seem at first glance.

Also, refreshingly, Horrocks’ stories are stories interested in work. Her cast includes farmers, nurses, office workers, a bartender, a teacher, a healthcare worker, a realtor, a banker, a tour guide, the titular terranauts, and a whole cast of white and blue collar workers.

As we learn of Iris, in “Sun City,” she “worked at the U.S.A. Dry Pea and Lentil Council trade group. She was the kind of lifetime admin who prided herself on being able to merge five distribution lists, kick the vending machine in the right place to free a stuck soda, and fix a paycheck all at 4:55 p.m. on a Friday. Iris had worked fifty weeks a year for thirty-five years and counting.” Like Iris, characters throughout the book are defined not only by their work but by the seeming need to be defined by their work, to be useful, in the most Midwestern sense.

And the Midwest features hugely here. Michigan is a staple of the book, particularly the Upper Peninsula of Michigan and Grand Rapids. There are side trips to Arizona, one featuring a Minnesota transplant. The aforementioned “Chance Me” is set in Massachusetts but features Arizona transplants. And, near the end, there are two forays overseas. In “All Over With Fire,” an American experiments with infidelity and a midlife crisis in the Czech Republic, while in “Paradise Lodge,” a tour guide leads American and Canadian tourists through the rainforests of Peru.

But in the end, Life Among the Terranauts is a book big on small towns, which is where the stories, and the characters, feel most at home. As the narrator of “Norwegian for Troll” tells us: “Ann Arbor…was an expensive, stuck-up college town a full nine hours south. It might as well have been another country.”

In comparison to Horrocks’ exceptional first collection, the stories of Life Among the Terranauts are perhaps less carefully organized. While the earlier collection gains momentum with the age of its characters, narrators growing older as the stories advance, this book feels less orderly, or, if there is a scaffolding, it’s subtle enough to be easily missed.

At first glance, the collection follows the seasons, beginning in winter, moving roughly forward, and returning to winter at the book’s midpoint with the quiet, contemplative “And Looked Down One As Far As I Could.” But this pattern is, afterward, abandoned, the final six stories no longer subscribing to a seasonal chronology or even clinging to seasons as a primary feature of their settings. No matter. Savvy readers need no handholding, and exceptional collections need no devices that risk gimmickry. Sometimes a collection is just that, a collection.

When it comes to collections, it is the habit of reviewers to locate one story to bully. Yet while no book is perfect, there isn’t a bad story in this book. And why would there be? This isn’t Horrocks’ first rodeo, and, with stories here from The New Yorker, The Atlantic, One Story, and The Best American Short Stories, some nearly a decade old, this collection certainly could have arrived sooner were the author concerned about speed over excellence. The collection is pristine, and, while the stories are thematically at home alongside Horrocks’ previous work, they are unquestionably an artistic and technical leap beyond.