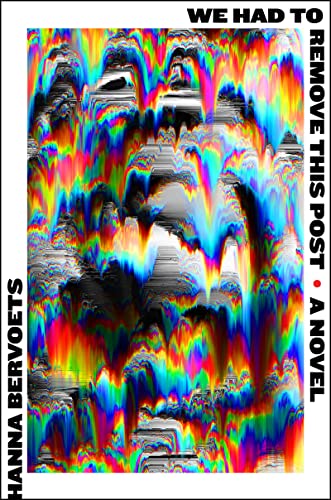 “Rarely does this novel read like correspondence. The prose is too fine, the settings too detailed, the pacing exquisite.”

What is the price of wellness? When it comes to social media and the rapidly evolving technology of the 21st century, the question is evergreen. A decade ago, smartphones began their game of pinball with our morality, powering convenience with cobalt and child labor. A decade before that, people began trading their dignity, and often their clothes, for a shot at infamy, if not fame, on “reality” TV. And long before this, Faust weighed his soul at the crossroads.

But in Hanna Bervoets’ smashing new novel, We Had to Remove This Post, protagonist Kayleigh is not asked to surrender her soul, only her mental health, trading trauma for financial security and upward mobility. The job she takes is commercial online content moderator; the platform for which she moderates content, while never named, is doubtless Facebook, a site teenagers “abandoned . . . ages ago in favor of their own dance and lip-synching apps.” (Read: TikTok.)

“What’s the worst thing you ever saw?” people still ask Kayleigh 16 months after she’s left Hexa, the fictional subcontractor that approves content for the unnamed social media platform. The answer: damn near everything. Violence. Pornography. Violent pornography. Flat earth videos. Conspiracy videos. Self-harm videos. Videos of suicide, of murder, and of every manner of torture, rape, and abuse.

Bervoets smartly dispenses with the question of why anyone would take such a trauma-inducing job by presenting us, first, with a protagonist who has survived other bleak, if ethically adiaphorous, jobs, such as “‘customer service assistant’ for a third-party company . . . contracted by a large furniture manufacturer,” at which she was routinely yelled at over the phone. Second, Hexa pays well, and Kayleigh, having been emotionally abused and manipulated by a previous girlfriend, is deeply in debt. Not to empathize with Kayleigh is never to have been broke or endured bad jobs. In short, anyone tempted to judge Kayleigh for signing up with such a disreputable outfit need only check their privilege on page one.

Then there is the fact that we all feed the monster. Put another way, those who have disabled all of their social media accounts, let them cast the first stone.

Unsurprisingly, the retention rate at Hexa, given the horrendous nature of what its employees must view eight hours a day, is low. (One haunting passage depicts a young woman razoring her face to ribbons.) Kayleigh, however, finds herself cut out for the work. A fast learner, she quickly memorizes the company’s ever-evolving rules and policies which are, even when stationary, maddeningly complex and seemingly contradictory:

With the evaporation of easy fixes, like spam, and the uptick in viewings of graphic violence and conspiracy theories, the workers’ spirits droop and their motivation plummets.

Here, the novel is reminiscent of Joshua Ferris’s office job satire Then We Came to the End, and even, in places, as darkly funny, minus the hive mind. And it is in this absence of univocality that Bervoets’ novel’s greatest strength lies. For, as one might expect of real life, the psychological responses to trauma are myriad and multifaceted.

The changes emerge gradually, characters drinking and smoking after work to cope. Gradually, alcohol and marijuana burrow their way into breaks at work. Soon, workers are finding closets and corners in which to have sex on the clock.

Each character yields to a different trauma or temptation, each changed in their own way, none for better, all for worse. In one of the novel’s darkest scenes, the workers band together at a window to watch a man on a roof. Because they are primed for horror, they mistake the sight of a construction worker doing his job for a suicide attempt. They watch so long, one worker, Louis, shouts, “jump already!” When someone suggests that something must be done, Kayleigh is surprised to find that, despite “murmuring in agreement, no one did anything.”

When a worker named Robert quits with little warning and even less emotion, he sums up the job’s risk-reward ratio plainly, making clear, to all but the most cynical reader, why no payout is worth the torture of ingesting vile content day after day: “I just don’t feel like a person anymore.”

As the novel proceeds, the characters’ psyches unravel, not least of all Kayleigh’s, and it isn’t long before the reader begins to suspect that our viewpoint character, always careful to catalogue the specks in the eyes of her colleagues, is perhaps hiding a sizeable and horrific plank of her own.

The novel’s only curious choice is its form, the narration presented ostensibly as Kayleigh’s correspondence with one Mr. Stitic, a seemingly powerful lawyer representing Hexa workers in a class action. While we never see or hear from Mr. Stitic, he has pursued Kayleigh aggressively, the novel her epistolary once-and-for-all explanation for why she will not join the suit, no matter how much money she stands to forego.

Ultimately, though, the frame is a device. Thirty pages in, Mr. Stitic more or less evaporates from the page, the reader reminded, only rarely, of the audience for the book and the occasion for the telling. Rarely does this novel read like correspondence. The prose is too fine, the settings too detailed, the pacing exquisite. The choice to frame the novel as a letter few could write is no gimmick, nor does the form distract from the novel’s momentum or the mystery at the heart of the story. But some readers will question the usefulness of the choice and its bearing on the novel’s internal logic. Given the nature of what Kaleigh must confess, by novel’s end, would she really write down such things?

By novel’s end, everything in Kayleigh’s life is bad and getting worse. But who is to blame? Kayleigh? Her coworkers? Hexa? The platform that demands Hexa deliver the goods? A society that demands the existence of such platforms? Lucky for the reader, the novel is no mere morality play, Kayleigh no innocent victim, and there are no easy answers.

And while the novel culminates in a place no reader could predict, the ending is bold and necessary and among the best you’ll read this year, the kind of ending that risks feeling dissatisfying until the reader does the work of answering an important question that the narrator is only just beginning to answer for herself.