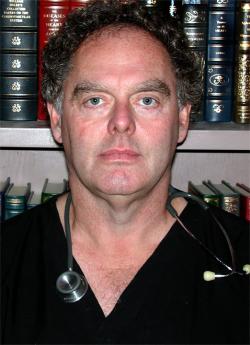 He has worked with many novelists and with the writers of popular television shows such as Law & Order, CSI: Miami, Diagnosis Murder, Monk, Judging Amy, Peacemakers, Cold Case, House, Medium, Women’s Murder Club, 1-800-Missing, The Glades, and Pretty Little Liars.

He is a practicing cardiologist in Orange County, California.

Murder and Mayhem: A Doctor Answers Medical and Forensic Questions for Mystery Writers

Run To Ground: A Novel

Royal Pains: First, Do No Harm

What can cure can kill, but can it also impart immortality?

“. . . an easily accessible and well-written primer on the history of forensic science.”

“If this story has a theme, it’s pain. Physical, emotional, psychological pain.”

Fear nothing? Fear everything. And everyone.

Does some ancient microbiological material hide deep in the Earth? One that, if recovered, could foster marvelous advances in science and medicine?

Light Of The World (A Dave Robicheaux Novel)

“. . . the characters rise to haunt you long after you read the final page.”