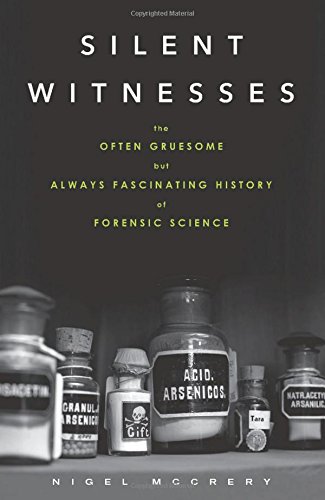 “. . . an easily accessible and well-written primer on the history of forensic science.”

Silent Witnesses is an easily accessible and well-written primer on the history of forensic science. It reads like a work of fiction but offers the reader a clear history of many of the most important advances in forensic investigative techniques.

The topics are covered in chapters titled: Identity, Ballistics, Blood, Trace Evidence, The Body, Poisons, and DNA. Each subject is reviewed chronologically and numerous milestone cases in the development and growth of forensic science are presented.

For example, in the Identity chapter, the war between Alphonse Bertillon and his anthropometric ID system known as “bertillonage” and those who favored fingerprinting as the gold standard for identification of an individual is documented.

In Blood, the development of the ABO blood typing system is well presented as well as the methods for identifying a stain as blood and determining that it is human and not animal, both extremely important in crimes where blood is shed.

In Trace Evidence, the discovery and development of the microscope as a forensic tool is covered in great detail. Poisons have been around almost as long as civilization and in the chapter Poisons this long and sordid history is chronicled as are the steps in the creation of the fascinating field of forensic toxicology, including the development of the famous Marsh and Reinsch tests for identifying the “inheritance powder” arsenic.

Perhaps the most enjoyable parts of Silent Witnesses are the discussions of famous cases that helped develop forensic science as a viable entity. Silent Witnesses opens with the famous Colin Pitchfork case—the first time DNA profiling was used to solve a murder.

Other seminal cases include: the Francisca Rojas case (the first time fingerprints solved a murder); the St. Valentine’s Day massacre (which put firearms examinations in the public eye); the Sam Sheppard case (where blood spatter analysis proved crucial in the retrial of the famous physician); the Parkman-Webster case (one of the first to employ dental examinations to identify a partially destroyed corpse); the Murder at the Crumbles case (involving the great medical detective Sir Bernard Spilsbury and leading to the creation of the police officer’s “murder bag”); the more modern “radiological” poisoning of Russian dissident Alexander Litvinenko; and many more that will keep the reader enthralled.

Silent Witnesses is a delightful journey through the evolution of forensic science and a very useful introduction to the subject. Highly recommended.