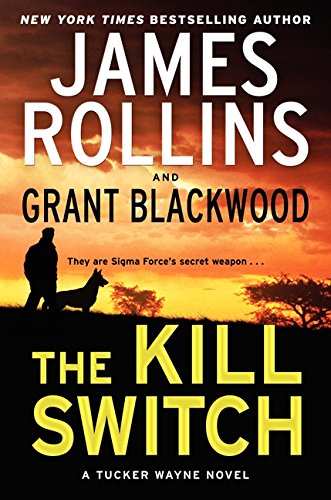 Does some ancient microbiological material hide deep in the Earth? One that, if recovered, could foster marvelous advances in science and medicine? Or in the wrong hands lead to mankind’s ultimate destruction?

This is the premise behind The Kill Switch, the latest thriller from James Rollins (and coauthor Grant Blackwood). Typical of Mr. Rollins’ work, the story jumps across the globe from Russia, to Istanbul, to Africa, to the US, and offers a diverse cast of well-developed characters and a tightly woven plot that grabs the reader and doesn’t let go.

US Army Ranger Tucker Wayne, along with his constant canine companion Kane, a military trained Belgian Malinois, is charged with infiltrating Russia’s most secret and well-guarded institutions and extracting Dr. Abram Bukolov, who just might know where to find the elusive LUCA—the progenitor substance that holds so much promise, and so much danger.

After safely escorting Bukolov from Russian territory, a convoluted and harrowing adventure in its own right, Tucker’s problems are just beginning. The intrepid group immediately heads to South Africa, the presumed location of LUCA. But where is it?

Based on his study of Doctor Paulos de Klerk’s journal, which survived the bloody and prolonged Boer War, Bukolov believes the Earth’s only living source of LUCA is deep in the jungle enclosed a long-lost cave. With such detailed information, could finding the LUCA remnants be that difficult? And what of General Kharzin and the ruthless Felice? Can Tucker beat them to the prize?

The convergence of these forces raises tension, the pace quickens, and the twists and turns become unnerving as Tucker is dragged deeply into an inhospitable terrain, Kharzin and Felice in pursuit.

This is a classic James Rollins tale that draws on a broad range of science, warfare, pursuit, escape, and plot twists on very page. His fans will love it, and new readers will immediately jump on the Rollins bandwagon.