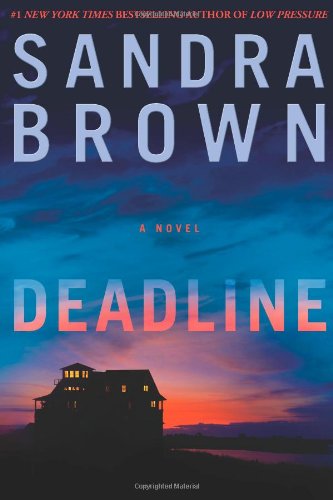 Sandra Brown has built her stellar career on gritty stories that always involve high tension: political, social, personal, psychological, and sexual. Often with anti-hero protagonists, chilling antagonists, and a cadre of deeply drawn supporting characters, her stories are edge-of-the-seat, deep-into-the-night tales. Deadline is such a story.

Dawson Scott is a highly respected journalist freshly back from war-torn Afghanistan where he brought back a bag full of soldier stories as well as a dose of PTSD so severe he must self-medicate with alcohol and psychotropic drugs to fend off his nightmare-driven insomnia. The last thing he wants is another story about a damaged soldier.

But retiring FBI agent Gary Headly, who is Dawson’s godfather, convinces him to dig into the love-triangle murder of Marine Jeremy Wesson and Darlene Strong by Darlene’s husband Willard.

Dawson resists the story, thinking sitting in on the trial a waste of time. But since his godfather requested he do so and since his other option was to follow orders from his editor and cover a story about blind balloonists, he plops down in the courtroom, bored and disinterested—until the beautiful Amelia, Jeremy Wesson’s ex-wife and witness for the prosecution, walks into the courtroom.

After her direct testimony is completed, the trial recesses for a long holiday weekend after which she must return for what is anticipated to be a grueling cross examination. Dawson follows her to a small coastal South Carolina island where she and her two young sons are hiding from the media storm surrounding the sensational case. He leases the house next door in the hopes of an interview, not to mention getting to know her a better, unaware of how their lives will intertwine.

But is he the only one keeping an eye on Amelia? Is there more to the story than a simple double murder?

For Amelia, the long weekend is anything but relaxing. Odd things begin happening. Lost articles turn up in strange places, broken items are miraculously repaired. By whom? Why? The stranger next door, Dawson Scott, befriends her sons and her nanny, who later turns up murdered while a violent storm hammers the coast. Her only ally seems to be the kindly old man who has rented the house next to hers every summer for many years.

From Dawson, Amelia learns more about her ex-husband’s past than she ever wanted to know. More than she wants her sons to know about their father. And each revelation raises more questions. Is her ex truly dead? After all, he body was never found. Where is her long-missing father-in-law Carl Wingert, a domestic terrorist and one of the FBI’s Most Wanted.

When last seen decades earlier, he was head of the Rangers of Righteousness and disappeared during a Ruby Ridge-type shootout with Agent Headly at Golden Branch, Oregon. Has he reentered Amelia’s life? Does he have a role in the double murder, or the strange happenings? Who killed her nanny? Who wants her dead? And more importantly why? Who can she trust?

The answer to each of these questions is revealed in a fast-paced conclusion that will keep the reader guessing until the end—not to mention up late breathlessly flipping pages.

This story is classic Sandra Brown. It is intelligently written, deftly paced, and convoluted to the point that each character must dig deep into his or her own past and current psyche to make sense of the chaotic world around them. Highly recommended.