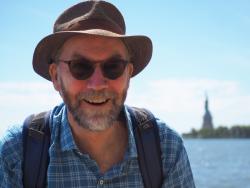 John P. Loonam has published fiction in various journals, including descant, wordrunner and The Santa Fe Writer’s Project, as well as anthologies like Lock & Load, and Modern Shorts. His short plays have been featured by the Mottola Theater Project.

Mr. Loonam is married and the father of two sons; the four have lived in Brooklyn since long before it was cool. He has a Ph.D. in American Literature from the City University of New York. He taught English in New York City public schools for over 35 years.

A key challenge in writing historical fiction is balancing the mores and ethos of the time described with those of the time the narrative will be read in.

Jessie van Eerden has created a surprising protagonist and a moving story full of unexpected moments that never stretch into the bizarre or unrealistic.