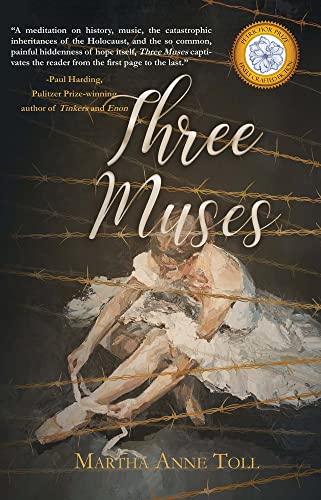 A key challenge in writing historical fiction is balancing the mores and ethos of the time described with those of the time the narrative will be read in. Our understanding of race and sexuality, of art and commerce, of violence and war have changed in ways both large and small, obvious and subtle so that characters who are of their time, who think and behave in ways that might have been accepted, popular or simply ubiquitous once, can seem offensive today, whereas characters who think and feel as we presume readers do today may seem like woke ciphers, existing more to make a point than live a story.

Martha Toll embraces this challenge in her novel Three Muses. How characters react to their historical moment is a major theme of the novel, but Three Muses is neither pedantic nor philosophical. It is a love story in which two carefully hewn characters navigate the demands of relationship and selfhood, trauma and art, in worlds as diverse as the Holocaust and modern ballet. Toll infuses the behaviors and beliefs of the time with a contemporary understanding of psychology and power.

The narrative opens in 1944, in Germany. Janko, and his family have been swept up by the SS and are being transported to a concentration camp. Mutti, Janko’s mother, seizes the chance to show off Janko’s singing, and he is separated from his family and sent to entertain the camp Kommandant. While he is terrified and lonely, he slowly recognizes that his mother and brother have been killed, that he alone has survived because his mother let him go.

Alternating with the chapters on Janko’s life in the concentration camp is the story of young Katherine Sillman, a novice ballet dancer whose talent and beauty catch the eye of Boris Yanakov, Director of the New York State Ballet. He grooms her for stardom—changing her name to Katya Symanova and demanding total loyalty and obedience.

Janko also changes his name, becoming John Curtin when, after liberation, he moves to New York and studies to be a psychiatrist at Beaumont Hospital—a stand in for Bellevue. We see him battling a crippling loneliness as he tries to come to terms with the facts of his family’s murder and his own survival. Katya rises in the ranks of the ballet as Yanakov’s biggest star but must constantly deal with his demanding and possessive leadership.

Given what we know about the importance of community and support in overcoming PTSD and the changes we have seen the #MeToo movement has brought to the arts world, it is easy to become convinced that the solutions to John and Katya’s problems lies in each other. When the handsome doctor meets the beautiful ballerina, what we know about novels makes the happy ending seem inevitable. But Toll is working on something more complicated than romance.

There is an audaciousness to Toll’s ambition in taking on both the Holocaust and the mid-century dance world, and she mostly pulls it off. The early chapters on Janko’s survival are the most vivid, but Katya’s moral quandary feels absolutely real as she weighs her artistic ambitions against her sense of autonomy and agency.

Toll’s language often strains to capture the passion and intelligence of Katya’s dancing, and Yanakov’s choreography comes across as more pretention than genius. However, the characters are engaging, their situations and their choices seem real, and the narrative of their coming together pulls one along convincingly. Three Muses won the Regal Publishing House’s Petrichor Prize for Finely Crafted Fiction, and it is not hard to admire Toll’s craft and agree with Regal’s decision.

John Loonam is a retired English teacher who has published fiction in many journals over several decades. His reviews have also appeared in the Washington Independent Review.