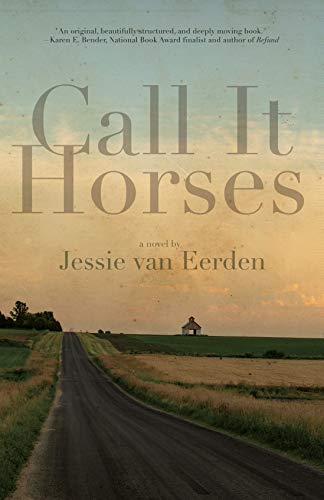 Jessie van Eerden has created a surprising protagonist and a moving story full of unexpected moments that never stretch into the bizarre or unrealistic.

Frankie, the narrator, is a working-class girl from the small, apparently fictional, town of Caudill, West Virginia. Orphaned as a teenager, she has lived alone since then under the loose and rough guidance of her aunt Mave. Mave allowed Frankie to drop out of high school, but having herself gone to Smith College, she continued Frankie’s education through a wide and demanding reading list, overseen by Mave’s lover Ruth, a Smith professor.

So although Frankie works as a janitor in a local metal working plant and lives in a community full of farmers and auto-mechanics, crop-dusting pilots, and highway workers, she writes with the grace and depth of observation you might expect of someone far more highly educated. She reads The Bible, the poetry of Muriel Ruckeyser, and Van Gogh’s letters. She refers regularly to semiotics. She has a gift for startling metaphor: encountering debris “born” from porch light, “as though uttered by it;” travelling through “parsley smoked” air and noticing the earth “taking a gasp” in the change of weather.

The result is a voice of rural poverty that appears to transcend the limitations of geography and class and that gives that community a full intellectual and emotional vocabulary.

Van Eerden has also created a plot that is at once both direct and meandering.

Frankie, Mave, Nan, and Frankie’s dog Ellis are driving cross country—from West Virginia to Abiquiú, New Mexico—to fulfill Mave’s desire to see the roofless room in Georgia O’Keeffe’s house and to trade the swampy air of West Virginia for the hot, dry dessert in the hopes that it will help Mave in her battle against cancer. Nan is a young, alluring artist who has recently married Dillon, Frankie’s first and perhaps, only, great love. As this trio drives through Kentucky, Tennessee, Arkansas, and Oklahoma, they bicker about destinations and food and money, but slowly get to the more serious conflicts beneath these squabbles.

Contrasting the contained momentum of the journey are Frankie’s flashbacks. She slowly, circuitously fills out the story of her life leading up to this road trip. We hear of her parents’ death in a car accident, of her passionate but brief relationship with Dillon, and her settling into a reluctant marriage with Clay. We hear of Mave’s ostracization for her sexuality, her life with Ruth and Ruth’s death. We get a warm and complicated portrait of Caudell.

Not all of the minor characters—and there are many—come to life with specificity, and there are times when Frankie goes on at some length about people it’s hard to identify, let alone genuinely care about. But the community is portrayed with a depth of emotion and visual clarity that creates a complex stew of deadend jobs and deep relationships, abusive men, and women’s solidarity. We learn of the deep bond between Mave and Frankie, a kind of voluntary mother-daughter pairing hurtling toward its end. And we watch Frankie come to understand that bond.

The narrative is told in a long, rambling letter to the long-dead Ruth, whom Frankie knew of, but never met. While she never appears nor speaks, Ruth watches over this narrative like a guardian intellect, having pushed Mave toward selfhood and encouraged Frankie to read and write. The longing for the paintings of O’Keeffe and the spare, dry desert is a palpable reminder of our need for acceptance and change as we travel with these women from the heavy moist air of the east to something cleaner, clearer.

John Loonam is a retired English teacher who has published fiction in many journals over several decades. His reviews have also appeared in the Washington Independent Review.