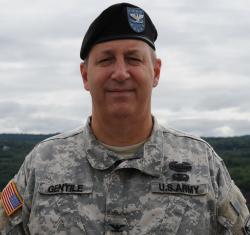 Colonel Gian P. Gentile received a BA in history from the University of California, Berkeley, in 1986 and was commissioned through ROTC as second lieutenant of Armor. He is also is a graduate of the Army’s School of Advanced Military Studies (SAMS) and holds a doctorate in history from Stanford University.

His book How Effective is Strategic Bombing? Lessons Learned from World War II to Kosovo, was published by New York University Press in 2000. He has had articles published in the Pacific Historical Review, Air Power History, Journal of Military History, Joint Forces Quarterly, Parameters, Armed Forces Journal, and The National Interest. He has also published numerous opinion articles in the Washington Post, Christian Science Monitor, Washington Times, International Herald Tribune, and Army Times. His latest book, Wrong Turn: America’s Deadly Embrace of Counterinsurgency is due out in April 2013 by The New Press.

Col. Gentile has been a visiting fellow at the Council on Foreign Relations in New York City and currently directs the Military History Program at the United States Military Academy at West Point.

The Boys of '67: Charlie Company's War in Vietnam (General Military)

Invisible Armies: An Epic History of Guerrilla Warfare from Ancient Times to the Present

“Historical accuracy and truth, . . . take a second place in Invisible Armies to the book’s highly politicized point of view . . .”

The Insurgents: David Petraeus and the Plot to Change the American Way of War

“. . . history will not be kind to the American generals who have led these wars—generals like David Petraeus.”

The Endgame: The Inside Story of the Struggle for Iraq, from George W. Bush to Barack Obama

“The essential point The Endgame misses, however, is what the Surge really showed, which . . .