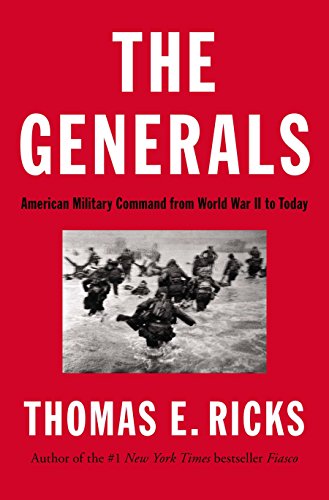 In his groundbreaking 1976 book The Face of Battle, eminent historian John Keegan argued that the history of battle should focus on more than the generals and their decisions.

Keegan’s book helped popularize what would become known as the “new military history” that sought to explain and understand warfare not solely through the eyes of the general, but from myriad other military, social, cultural, and political factors.

Tom Ricks’s new book The Generals regresses from Keegan and takes us back to a less complicated form of military storytelling in which wars’ outcomes were determined solely by the performance of army commanders.

The main argument to the book is simple: Relieve American army generals in war for poor performance and victory will be more attainable. Mr. Ricks surrounds this argument with a template based on General George C. Marshall’s method of general officer management in World War II.

Marshall chose the best and the brightest generals for senior command, but when they failed in the field in places like Normandy in the summer of 1944, he relieved them quickly and replaced them with someone else. The beauty of the Marshall method, as author Ricks describes it, derived from second-chance opportunities—even though generals were often relieved in World War II, their dismissals were not career ending.

Mr. Ricks then religiously employs this template as an evaluation of individual generals from George S. Patton in World War II to David H. Petraeus in Iraq. Mr. Ricks’s reoccurring judgment throughout the book is that since the end of World War II certain generals should have been relieved—General William Westmoreland in Vietnam or General George Casey in Iraq—for poor performance—and if they had been relieved via the Marshall method, these wars would have gone better.

Unfortunately, the problem starts in this highly readable but flawed book with the argument itself. Relieving generals in war does not necessarily improve military performance or an army’s chances for victory.

Simply put, Mr. Ricks never proves whether or not relieving generals in war works; the book only assumes that it does.

In fact, the book might have made an important contribution to history if Mr. Ricks had narrowed his focus to World War II and explored the important historical question of whether or not relieving generals in that war improved military effectiveness.

On the surface, such a proposition is seductively simple in its supreme correctness. Most students of military history, however, understand that military performance and the outcomes of wars turns on myriad factors beyond the mono-causal explanation of the relief of generals.

And by deploying his “template” of the Marshall way—a word Mr. Ricks explicitly uses—to evaluate numerous modern U.S. Army generals since the end of World War II, he commits the sin of the serious historian: He undertakes a political science approach to the exploration and analysis of history, developing a template and then compelling the past to conform to that template.

Adherence to the Marshall model, however, causes Mr. Ricks to judge the performance of generals in a highly problematic and unbalanced way. For example, Mr. Ricks rightly criticizes Generals Colin Powell and Norman Schwarzkopf in the First Gulf War for not properly aligning military power to achieve policy aims—namely allowing the Republican Guards divisions to escape back into Iraq—a fair criticism of these two generals to be sure.

But in a preceding chapter on the Vietnam War, General Creighton Abrams—Westmoreland’s replacement after the 1968 Tet Offensive—receives no censure from Mr. Ricks for making essentially the same mistake.

President Richard Nixon wanted Abrams to use the firepower from American B52 bombers to hit key points in North Vietnam to pressure their government into giving into American demands at the negotiating table. Abrams, conversely, wanted to use the majority of American firepower to fight the North Vietnamese Army inside South Vietnam during the 1972 Easter Offensive.

Nixon seriously considered relieving Abrams for his poor performance because of Abrams’s inability to translate the commander-in-chief’s wishes into a coherent military strategy, yet Ricks breezily dismisses Abrams’s near relief while calling for the dismissal of other American generals in subsequent wars for making the same basic mistake.

Mr. Ricks replicates his light handling of Abrams with a less than critical treatment of General David Petraeus’s performance in Afghanistan. There is a reason. The Generals, like Mr. Ricks’s two previous books on Iraq—Fiasco and The Gamble—are bound by a certain narrative of counterinsurgency warfare. That narrative emerged after Vietnam and argued that an enlightened general named Abrams turned around the war by reinventing his army and conducting counterinsurgency correctly, only to have the war lost by protesting malcontents on college campuses and weak American politicians who refused to continue material support to the South Vietnamese government.

Of course, that narrative as it emerged after Vietnam was pure moonshine, but it resonated within some circles, especially after America entered the war with Iraq in 2003, because Americans wanted to believe their generals were capable of winning any war.

In Iraq the narrative played out again with another counterinsurgency war lost until saved by another enlightened general who rode onto the scene. This time his name was David Petraeus. In both of Mr. Ricks’s previous books and now in The Generals he tacks perfectly with the counterinsurgency narrative.

For Thomas Ricks, Petraeus has proven to be the exception, one of the few post World War II generals who finally did war right. It just wouldn’t have fit neatly with the narrative and The Generals if the so-called savior general in Iraq was held to account for America’s strategic failure in Afghanistan.

Unfortunately The Generals rests on a gimmick: Relieve more U.S. Army generals and wars will be made better.

Military history, however, is much more complicated than this seductive gimmick.

In one sense Mr. Ricks is right that the American army has not produced strategic thinkers in its higher ranks. But his simplistic solution is also quite dangerous if the policymakers and others who read it come to believe it is true. America at war with Syria, Iran, Yemen, sure—just relieve a few generals, get the right ones in place, and victory will be assured.