The Endgame: The Inside Story of the Struggle for Iraq, from George W. Bush to Barack Obama 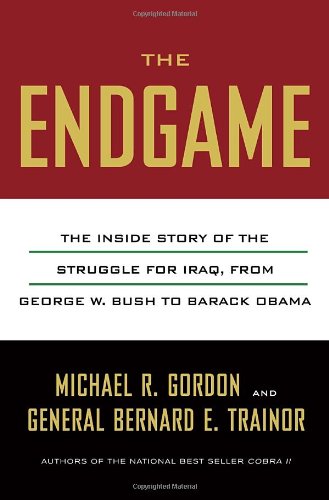 “The essential point The Endgame misses, however, is what the Surge really showed, which . . . is not the unlimited prospects for American military power in the future but its very real and defined limits.”

The moral to the story of The Endgame: The Inside Story of the Struggle for Iraq, from George W. Bush to Barack Obama is simple and pure: American military power works at transforming Islamic nations as long as its efforts are not bungled by incompetent generals and inept politicians.

The underlying aim of the book is to resurrect the idea from the ashes of burning Iraq (and Afghanistan) that there is still a future for the transformative power of the American military deployed into the troubled spots of the world to make them better.

The Endgame tells a detailed story, largely based on post-event interviews, of the military and political struggle that defined the U.S. occupation of Iraq from 2003 to 2011. It covers in minute detail the Iraqi political side to the war as well as the American side along with other regional players like Iran, Turkey, and Syria.

It also attempts to provide an explanation for the purported shift in strategy under General David Petraeus and the vaunted Surge that began in early 2007 and the apparent effect the Surge supposedly had on the overall lowering of violence that occurred in Iraq in late 2007.

The first part deals with the early days of the American occupation and ends with Iraq imploding from sectarian civil war in late 2006. It is a story, as the authors portray it, of bumbling generals who didn’t understand the war they were fighting and missed opportunities by senior American political and military leaders who could have brought quick stability to Iraq with a more enlightened approach.

The second part of the book is really the story of the Surge and David Petraeus. Petraeus, as The Endgame portrays him, nearly singlehandedly and with the help of a few smart civilian experts, a few soldier-scholar colonels, and a retired four star general turned the war around, made military force finally work in Iraq, and ultimately saved Iraq from a desperate situation.

Part three of the book picks up with the end of the Surge and chronicles the trials, tribulations, and stumblings of the Iraqi government up to the departure of the Americans at the end of 2011. It is also a story of missed opportunities, according to the authors, in which the United States could have more adroitly applied its leverage to shape a more democratically organized Iraq along with a sustained American military presence.

If only—yes if only, since the Ifs of the book drive its fundamental theme—the American military had figured out how to do the Surge with Petraeus in 2003 instead of waiting until 2007, much wasted energy could have been avoided and civil war averted. If only, after the Surge’s military success, American political leaders had displayed resolve to see the effort through in Iraq by maintaining a military presence, things would have turned out much better.

Thematically, half of The Endgame is actually quite good, a significant contribution to our understanding of the intricacies of Iraqi politics, inside accounts of various Shia and Sunni insurgent groups, and Iran’s ongoing involvement in Iraq, etc. In those areas the book excels and is certainly worth the read.

Yet the other thematic half of the book—the half that aims to tell the story of American actions in Iraq namely military operations and strategy—is a disappointment.

That half of the book might just have been penned by any of the Petraeus hagiographers who have written similar accounts of the general over the past four years: for instance Paula Broadwell’s All In, Thomas Ricks’s The Gamble, and Linda Robinson’s Tell Me How This Ends. These other books along with The Endgame tell the same basic yarn of a failed military effort in Iraq rescued by, as another Petraeus hagiographer Victor David Hanson refers to him, the “maverick savior general.”

But because the underlying theme to the book is to resurrect the idea of the utility of American military power to transform the troubled spots of the world, it causes the book to inflate the importance of Petraeus as a commanding general in Iraq and overstate the changes in operations and strategy that occurred once he rode into the scene.

For instance, Messrs. Gordon and Trainor state that the Surge of troops under Petraues that began in early 2007 acted as a “catalyst” for the other developing conditions in Iraq like the spread of the Sunni Awakening and the Shia militia decision to stand down attacks which came to full fruition by mid 2007. The guts of that “catalyst,” argue the authors, were a radically transformed strategy and operational method put into place by Petraeus.

In actuality the overall military strategy in Iraq from 2003 to 2011 remained fundamentally the same: build a new Iraqi nation at the barrel of an American gun and as quickly as possible turn things over to the Iraqis.

To be sure there were some modest tactical adjustments during the Surge along with of course the increased number of combat brigades, but those changes can’t explain the significant lowering of violence that actually did occur by the end of 2007. Instead the lowering of violence had much more to do with the Sunni Awakening—the real catalyst for change in Iraq. The Surge and Petraeus, contrary to what Messrs. Gordon and Trainor argue, followed rather than lead it.

But the argument of continuity in strategy and operations between the Surge and what came before just won’t do for The Endgame, which seems to want desperately to show that American military power can still transform and make better the world’s troubled spots. With this as the book’s premise, the idea that the Surge really was different and turned things around in Iraq is too difficult to pass up.

The essential point The Endgame misses, however, is what the Surge really showed, which along with the entire American military effort in Iraq is not the unlimited prospects for American military power in the future but its very real and defined limits.