The Insurgents: David Petraeus and the Plot to Change the American Way of War 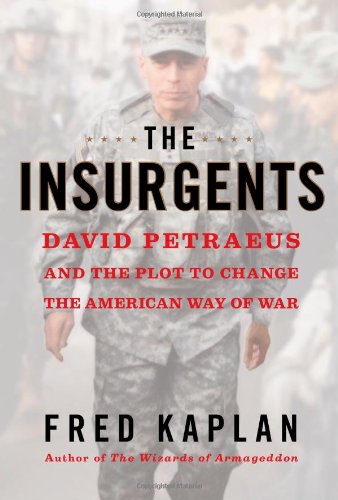 “. . . history will not be kind to the American generals who have led these wars—generals like David Petraeus.”

After reading Fred Kaplan’s book The Insurgents: David Petraeus and the Plot to Change the American Way of War one can only wonder how the U.S. army was able to accomplish anything that it did over the last 40 years—for example, the successful invasion of Panama in 1988 or the eviction of the Iraqi army from Kuwait in 1991, or the removal of the Hussein regime in 2003—without David Petraeus in command assisted by his team of Counterinsurgency (Coin) thinkers.

The book’s basic argument is that the American military, namely the American army, was stuck in an outdated form of warfare, or way of war, that sought only to fight big battles in the style of World War II by using massive amounts of firepower to kill any enemy that got in its way.

That was the way of war that the American army took into Iraq in 2003, according to Mr. Kaplan, and it was the wrong type of war to defeat the insurgency in Iraq. Fortunately however, the American army was saved from itself by a group of radical young-turk like military officers and civilian experts who understood the classic ways of Counterinsurgency.

Many members of this young group of military officers were spawned in the halls of the Social Science Department at West Point that taught them to be out-of-the-box thinkers.

Combine these young Counterinsurgency experts with the likes of the brilliant soldier-scholar David Petraeus and, according to Mr. Kaplan, the American army was reborn into a proven counterinsurgency force. Its way of war was changed for the better, even if it was only temporary.

There really isn’t anything new in this book. The same story of a failing army redeemed by Petraeus and his band of counterinsurgency brothers and sisters has been told in varying degrees of emphasis in books such as Tom Ricks’s The Gamble, Linda Robinson’s Tell Me How This Ends, Paula Broadwell’s All In, and Michael Gordon and Bernard Trainor’s The Endgame.

The story of Petraeus’ triumphalism has become the stock narrative for many writers on the Iraq and Afghanistan Wars.

Mr. Kaplan’s The Insurgents is a peculiar book. At the end of the book he points out “the modern age itself has reduced much of the whole Coin concept to folly.” This, as Mr. Kaplan notes was the “dark side of counterinsurgency” Petraeus and his crew of dissidents helped to put in place with the Surge of Troops in Iraq and then carried directly over to Afghanistan a few years later.

Mr. Kaplan is exactly right: It has been “folly” to think a bundle of methods derived from unsuccessful counterrevolutionary wars of the 1960s could be applied by the American army to transform Islamic societies at the barrel of a gun.

The peculiarity of The Insurgents is that Mr. Kaplan raises this fundamentally correct criticism in the concluding handful of chapters of the book, but the preponderance of the book is nothing more than a paean to Petraeus and the Coin experts.

It would be like somebody writing a book in 1916 highlighting the folly of trench warfare at least partially brought about by the Prussian influence and the belief that operational maneuver would overcome superior firepower and produce quick victory. But then the preceding four fifths of such a book would be about the greatness of Ludendorf and Falkanhayn as original thinkers, innovators, and dare one say “insurgents.”

For author Kaplan’s The Insurgents, these two opposing themes just don’t add up and defy reconciliation: Petraeus was a great general and the Coin movement brilliantly altered the American way of war, but in the end it all led to strategic folly in Iraq and Afghanistan.

This reflects cognitive dissonance in the extreme.

In the end, the reader of The Insurgents can only speculate on why the book suffers from cognitive dissonance. Perhaps it is that when Mr. Kaplan started working on the book in 2010 American Counterinsurgency was all the rage.

National newspapers like the New York Times and the Washington Post were reporting that the Surge under Petraeus had worked and brought about a fundamentally changed situation in Iraq. Iraq itself in 2010 seemed to be on a progressive trajectory to be the first democratic state in the Middle East, the natural dream of the neo conservative establishment.

All of this thanks to the insurgent David Petraeus, his enlightened Coin experts, and the changes they wrought on the American army.

Then there was Afghanistan in 2010. It too, at the time, seemed to be finally on the right track. Like Petraeus riding onto the scene in 2007 to save Iraq, in 2009 in Afghanistan another savior general rode onto the scene to save it, this time his name was Stanley McChrystal. Even after McChrystal’s relief in 2010, Petraeus took over from him, and both generals had put in place a “counterinsurgency strategy” just like the one that supposedly saved Iraq.

But by 2012 all of the perceived successes in Iraq and Afghanistan that looked so righteous in 2010 were in tatters. Iraq had become dominated by another Hussein-like dictator in Nuri al Maliki, and it was closely aligned with America’s regional enemy Iran.

Afghanistan remained a violent place to the point where overall levels of violence were higher than when McChrystal’s Surge had begun in 2009. Many Americans began to question, rightly, the worth of both of these wars.

In short, history caught up with Mr. Kaplan’s The Insurgents, which possibly explains why the book and its two opposing arguments never add up.

Eminent historian Andrew Bacevich has said that 20 or 30 years from now history will not be kind to the American generals who have led these wars—generals like David Petraeus. Nor will history be kind to writers such as Fred Kaplan, Paula Broadwell, Tom Ricks, and many others who took part in the promotion of the myth of American counterinsurgency and the idea that it was a better way of war. It was not.