The Boys of '67: Charlie Company's War in Vietnam (General Military) 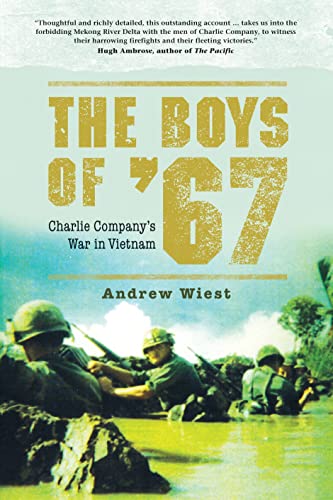 “. . . what The Boys of ’67 [brings] out is the limits to what American military power can accomplish when it tries to transform an entire society at the barrel of a gun.”

In spring 1997 historian Andrew Wiest writes in his book The Boys of ’67: Charlie Company’s War in Vietnam that he brought his students from the University of Southern Mississippi to the local Veterans Affairs office where they met with a group of Vietnam veterans who relayed their experiences on the Vietnam War. But one of the veterans intrigued Mr. Wiest to the point such that he invited him to speak formally to his students in a classroom setting on the war.

That veteran took him up on the offer and the following semester attended one of the classes. As the class began Mr. Wiest showed some film clips of combat footage from the war; at that point all hell broke loose with the veteran who had a serious flashback due to an ongoing bout with PTSD requiring him to be taken to a hospital by ambulance.

Later that evening as Mr. Wiest stayed with the veteran in the hospital he met the veteran’s therapist who began to explain the condition of PTSD with Vietnam veterans.

Mr. Wiest developed a friendship with the veteran as the months and years passed, continued to invite him to speak to his students, and in the course of this friendship learned about the veteran’s unit in Vietnam: Charlie Company, 4th Battalion, 47th Infantry, of the 9th Infantry Division.

Andrew Wiest’s The Boys of ’67 is important because it tells a story of a an American infantry company whose soldiers were almost to a man drafted and trained together for nearly a year, then deployed to Vietnam as a unit and not as individual replacements.

In this sense Charlie Company’s experience along with the rest of the 9th Infantry Division that it was a part of was unique. As Mr. Wiest points out their experience was similar to the American army’s experience in World War II where units trained together then deployed and fought.

But then again, as The Boy’s of ’67 highlights, Vietnam was a very, very different kind of war than World War II. And therein rests the inner tension that this book so superbly illuminates. If World War II, at least from an American perspective, was the good war fought with clear political goals and a coherent military strategy that worked, Vietnam was the confused war that ostensibly had a noble purpose to stop the spread of communism and help an American ally.

But for the soldiers who fought it on the ground that clarity of purpose became muddled in the death and destruction of a brutal industrialized war fought against the communist enemy and among the Vietnamese people. What the war did to these men who fought it and how it changed them is the driving narrative to the book.

The first set of chapters tells the story of how Charlie Company came together in 1966 for their training at Fort Riley, Kansas. Mr. Wiest provides in depth background descriptions of these men: where they came from in America, their demographic makeup. He paints a picture of young men who were drafted in 1966 and largely believed in the war, since many of their fathers had fought or served in World War II.

The middle chapters to the book cover Charlie Company’s combat operations in the Mekong Delta. It is in these chapters where Mr. Wiest shows the powerful, life changing effects that close combat has on the soldiers who fight it. It is also clear from these chapters that the men of Charlie Company developed life long bonds as fellow brothers in arms.

The concluding chapters focus on the return home of the men from Charlie Company who made it through the crucible of Vietnam. Mr. Wiest describes the wrenching effect of the men from Charlie Company when they arrived back home in America after a year of bloody combat in Vietnam. Hecklers at the airport calling them “baby killers” hurt these veterans deeply.

They thought they were doing their duty by fighting in Vietnam, but they came home to a country that was at a minimum supremely divided over the efficacy and morality of the war. To be sure the treatment of the returning veterans is a darker part of the American past, although the extent of this mistreatment has been questioned by a number of current analysts of the war.

Yet one can see perhaps in the darkness of these occurrences when they did happen, a brighter side to it: The American people writ large cared deeply in a morally connected way about the Vietnam War. As lamentable as the treatment of some returning Vietnam veterans was, at least it emerged out of a moral connection to the war.

But if the Vietnam War was different in this regard from Iraq and Afghanistan, what The Boys of ’67 does bring out is the limits to what American military power can accomplish when it tries to transform an entire society at the barrel of a gun.

In Vietnam, Iraq, and Afghanistan those very limits have been laid bare and so too has the destructiveness of war—not only upon the soldiers who fight them but on the lands and peoples where they are fought.