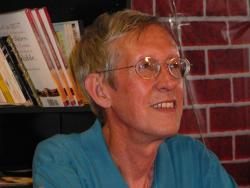 Don Fitz received his Ph.D. in 1974 from the University of Texas at Austin and has published research on social and community psychology in multiple professional journals. Dr. Fitz was a research psychologist for 25 years at St. Louis State Hospital. He has taught Environmental Psychology at Washington University and Fontbonne University in addition to many other psychology courses at colleges and universities in the St. Louis area.

Dr. Fitz is on the Editorial Board of Green Social Thought, which is sent to members of The Greens/Green Party USA. He is on the National Committee of The Greens/Green Party USA. Dr. Fitz produced the show Green Time in conjunction with KNLC-TV in the City of St. Louis for over 20 years. He conceptualized and designed the successful 2015 campaign for Proposition H, which protects several historic buildings in University City, Missouri. He was the 2016 candidate of the Missouri Green Party for Governor.

Dr. Fitz has published a series of articles on the Cuban medical system in Monthly Review, Z Magazine, and Green Social Thought, as well as several online publications. He has visited Cuba eight times and interviewed dozens of Cuban medical personnel.

Within the Shell of the Old: Essays on Workers' Self Organization (A Salute to George Rawick)

Much of the world’s youth worry that governments make only pretend gestures about climate change.

The Path to a Livable Future: A New Politics to Fight Climate Change, Racism, and the Next Pandemic (Open Media Series)

"The Path to a Livable Future may be the most serious and thought-provoking new book on climate change available.

The Green New Deal and Beyond: The Road from Climate Emergency to Ecological Reality (City Lights Open Media)

Stan Cox is one of those few people who dared predict the future and then watched it become true.

By the beginning of the Great War in 1914, it became clear that the internal combustion automobile was edging out its rival steam cars and electric cars.

Chernobyl: The History of a Nuclear Catastrophe

Why did Unit 4 of the Chernobyl nuclear plant explode on April 26, 1986? Was it operator error? Was it a design flaw? Should we look deeper into the Soviet system for the cause?