The Green New Deal and Beyond: The Road from Climate Emergency to Ecological Reality (City Lights Open Media) 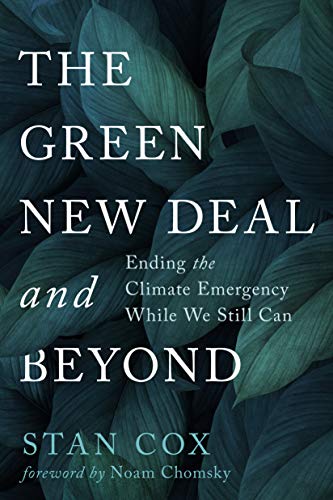 Stan Cox is one of those few people who dared predict the future and then watched it become true. When he was writing the book, The Green New Deal and Beyond, he scripted these prophetic words: “The oft-predicted national decline in use of fossil fuels is nowhere to be seen, and it is unlikely to occur on its own, at least until the next economic meltdown.”

Between the time that Cox described the conditions under which fossil fuel usage would go down and his book appeared in print, the COVID-19 pandemic spread across the globe, production crashed in country after country, and CO2 emissions dropped even more than they did during the 2008 financial crisis.

Among ideas for decreasing emissions to a sustainable level none has generated more enthusiasm than proposals for a Green New Deal (GND) to replace fossil fuels with a massive increase in solar, wind, and hydroelectric power. Yet the GND is criticized by “deep greens” who worry that increases in any type of production, solar panels and wind turbines included, will worsen environmental crises. Stan Cox jumps into this fray with the most pragmatic attempt to blend the two perspectives which has yet been written.

The powerful draw of the GND is that it links climate change to social problems by tracing both to a corporate-dominated system which puts profits above environmental protection and human welfare. Its advocates insist that both need to be addressed together.

In addition to promoting alternative energy (AltE) supporters propose to expand public transportation, build housing with maximum energy efficiency, forgive student loans, provide Medicare for All, and offer new green jobs at good pay—all of which would be powered by a growth in manufacturing that would be so immense as to dwarf growth during WWII.

Stan Cox is one of those deep thinkers who are highly cautious about unbridled support for a concept that might have drawbacks. In his foreword to the book Noam Chomsky notes that pro-GND US congresspersons do not directly challenge the fossil fuel industry. And Naomi Klein, who enthusiastically endorses what Cox writes, precautions that we must be wary that good paying green jobs do not morph into high-consuming lifestyles that add to greenhouse gas (GHG) emissions.

These two apprehensions become the cornerstone of how the author proposes to go “beyond” the GND. First it is necessary to eliminate fossil fuels on an accelerated schedule. Second society must reverse ecological damage caused by economic growth.

One of the strongest parts of The GND and Beyond is its systematic exposés of myths regarding energy, many of which are directly from the fossil fuel industry, and others which come from those who are so enthusiastic about AltE that they overlook its downsides. Here are a few of the key myths:

MYTH 1: “Current versions of the GND require elimination of fossil fuels.” As both Chomsky and Cox point out, Congressional proposals do nothing to reduce fossil fuels. A major point Cox raises is that there must be legislated guidelines quantifying annual decreases in fossil fuel production.

MYTH 3: “Shifting from gasoline-powered to electric cars is essential for a quick reduction in CO2 emissions.” Actually the huge increase in mines, smelters, factories, and transportation required for this transition would continue to heighten CO2 levels long before any emission savings would be realized. Additionally, it is highly doubtful that enough cobalt and lithium exist for every adult on the planet to own an electric car.

MYTH 4: “The US can obtain minerals needed for a complete transition of AltE.” But most of the 23 metals critical for solar and wind energy are outside of the US. Estimates are that 40% of conflicts within these countries are due to extraction, meaning that large increases in obtaining raw materials could cause a new round of resource wars.

MYTH 5: “The economy can separate economic growth from CO2 emissions, meaning that it is possible to produce more stuff while having fewer emissions.” In reality this “decoupling fallacy” is wishful thinking which has never happened on a sustained basis and mainly shows up when rich countries like the US shift their production to other parts of the world such as China. Increasing production of consumable commodities requires the machines necessary to make them and this is why Cox was prophetic when before COVID-19 he accurately predicted that the next downturn in CO2 emissions would happen when the economy contracted.

MYTH 6: “It is possible to meet GND goals for expanding infrastructure for 100% AltE by 2030.” In fact, meeting GND goals by this target date would require a 33-fold increase in industrial expansion, far more than has ever been achieved anywhere and would result in complete ecological devastation. Also, such colossal industrial growth would require more land space than used for all food production and living areas in the 48 contiguous states.

MYTH 7: “AltE can provide enough energy for at least 139 countries, including many poor ones.” This claim, dogmatically propounded by Mark Jacobson and his associates, may be the biggest myth of all. Cox thoroughly debunks it, showing that such research (1) is based on technology that does not exist or has never been proven; (2) rests on guesswork regarding energy storage that is completely unrealistic; (3) assumes that poor countries can reach energy efficiency levels of rich countries even though they do not have the infrastructure to do so; and, (4) believes that people in poor countries should be content to subsist with energy per person which is less than one-tenth of what Americans enjoy.

The author outlines how GND social justice goals can be accomplished without a monstrous economic buildup. Necessities could be provided for everyone via three steps of a “capping” program.

1. “Cap and adapt” requires establishing a maximum quantity for each corporation that extracts and sells fossil fuels and, of course, reducing the cap each year.

2. “Cap and cope” means coping with difficulties that are certain to happen as society reduces the amount of fossil fuels that are available, but without changing the amount of reduction.

3. “Cap and ration” builds upon a previous work by the author, Any Way You Slice It: The Past, Present, and Future of Rationing. To help reach GND goals a point system would rate the amount of CO2 required for the production and use of each commodity.

Each person would receive a rationing card that assigns the number of points for every purchase. This “Tradable Energy Quota” (TEQ) approach would set a limit on how many points a person could use each week. The beauty of the TEQ system is that it would not dictate how much of each commodity a person could use—it would be up to each person to decide how to allocate their own carbon points.

Just as there are difficulties with the GND that Stan Cox points out need correction, there are concerns with his analysis. One problem happens when the author addresses Mark Jacobson’s claim that AltE can provide sufficient energy for poor countries. The book argues that he is short-sighted for the reasons covered in MYTH 7. But is this critique too mild?

What rosy forecasts of AltE providing energy for the world leave out is infinite economic growth. At a 3% growth rate the economy doubles every 25 years. That means that in 50 years four times as much energy would be needed; in 100 years 64 times as much; and in 250 years 1024 times as much energy as currently being used. Besides many rare earth metals not being available in quantities remotely close to such requirements, a 3% growth rate would make the earth totally uninhabitable for humans long before 250 years arrived.

An odd problem pops up when the book asks how the GND could pay for expansion of energy which Cox estimates would be $15 trillion for the US and $100 trillion for the world. The author responds that the tax burden would fall on the richest 33% of Americans.

Why is this answer odd? Because he argues throughout the book that society must not expand energy production but reduce it. This is the same trap that many Medicare for All proponents fell into when asked how they would pay for the extra expenses. The answer is not “Tax the rich!” The answer should be “There are no extra expenses for something that costs less.”

Similarly, asking how to completely eliminate CO2 emissions does not seem like the right question to ask. After all, fossil fuels are necessary to create the heat required to produce (1) silicon wafers for solar panels, (2) concrete and steel used in construction of windmills and dams, and (3) plastic coverings for industrial windmill blades. Would it not be better to suggest realistic goals of reducing fossil fuel usage by 80%, 90% or 95%?

Yet another question arises with the way the “cap and adapt” financial system would actually work. Cox proposes to set limits on how much fossil fuels each corporation can produce. This is strange, given that market forces push each corporation to maximize profits. Instead of suggesting that limits be managed by the very institutions that abhor those limits why not propose that fossil fuel industries be nationalized as so many eco-socialists are doing? After all Bernie Sanders made “socialism” a household word and today fewer young people fear ogres from Moscow than capitalists on Wall Street.

Still looking at the financial system, Cox endorses a TEQ scheme that would grant each adult a weekly amount of carbon credits. This seems like a very workable proposition to restrain purchases that embody a large amount of carbon in their production and use. What happens when a person has not used all the carbon credits at the end of the week?

According to the TEQ plan, they would then get cash back, which they could use to purchase additional items. But this defeats the greater goal of reducing production. It would be much better to return unused carbon credits as time off work for the same pay. This would create a social dynamic for people to figure out how to use less junk and have more time to enjoy life.

There is one last issue with what is overall a truly great contribution to an ongoing discussion of limits to growth. Since every form of the GND—from the 2008 version presented in the United Kingdom to later European versions, through those backed by Democratic Party candidates in 2019—proposes economic growth that would be titanic (in both meanings of that word), then why continue using the phrase Green New Deal? Why not coin a term like “Deep Green Alternative?”