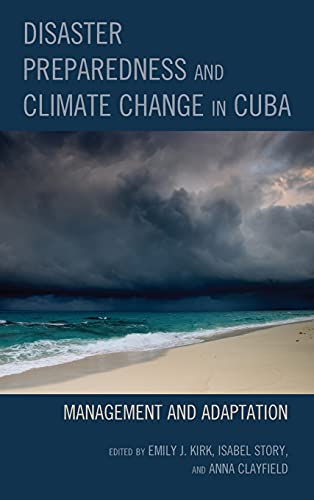 Much of the world’s youth worry that governments make only pretend gestures about climate change. Anyone sharing their concern might want to put aside whatever prejudices they have about Cuba and study the book Disaster Preparedness and Climate Change in Cuba. This collection of 14 essays may be the most profound untold story in print about an island nation struggling for survival against dangers already rising at its shores. The essays are an extraordinary assemblage of articles, with each author covering specific topics.

Cuban approaches are adapted to the unique geography and history of the island. What readers should take away is not so much the specific actions of Cuba as its method of studying a wide array of approaches and actually putting the best into effect. The book traces Cuba’s “preparedness” from the threat of a US invasion following its revolution through its resistance to hurricanes and diseases, which all laid the foundation for current adaptions to climate change.

Only four years after the revolution, in 1963, Hurricane Flora hit the Caribbean, killing 7000–8000. It sparked a complete redesign of health systems, intensifying their integration from the highest decision-making bodies to local health centers.

Decades of re-designing proved successful. In September 2017 Category 5 Hurricane Maria pounded Puerto Rico, leading to 2975 deaths. The same month Irma, also a Category 5 Hurricane, arrived in Cuba causing 10 deaths. The dedication to actually preparing the country for a hurricane (as opposed to merely talking about preparedness) became a model for coping with climate change. Projecting potential future damage led Cubans to realize that by 2050 rising water levels could destroy 122 coastal towns. By 2017 Cuba had become the only country with a government-led plan (Project Life, or Tarea Vida) projecting for 100 years to combat climate change.

Several aspects merged to form the core of Cuban disaster planning. They included education, the military, and social relationships. When a policy change is introduced government representatives go to each community, including the most remote rural ones, to make sure that everyone knows the threats posed by climate change to their lives and how they can alter behaviors to minimize them.

As non-stop use of fossil fuels renders the continued existence of humanity questionable, the issue of how to obtain energy rationally looms as a core problem. Disaster Preparedness explores an intriguing variety of energy sources. Some of them are outstandingly good; a few are bad; and many provoke closer examination.

Raúl Castro proposed in 1980 that it was necessary to protect the countryside from impacts of nickel mining, essential for foreign trade. What was critical in this early approach was an understanding that every type of metal extraction has negative effects that must be weighed against its usefulness so those negatives can be minimized.

Though there are negative aspects to Cuba’s energy perspectives, energy efficiency (EE) is not one of them. Cuba, a poor country with a planned economy, can design policies to reduce energy use. Whatever is saved from EE can lead to less or low-energy production, resulting in a spiraling down of energy usage. In contrast, competition drives capitalist economies toward investing funds saved from EE toward economic expansion.

Though a planned economy allows for decisions that are healthier, bad choices can be made. One such consideration in Cuba is “solid waste energy capacities,” which is typically a euphemism for burning waste in incinerators. Incinerators are a terrible way to produce energy since they merely reduce the volume of trash to 10% of its original size while releasing poisonous gases, heavy metals (such as mercury and lead), and cancer-causing dioxins and furans.

The worst energy alternative was favored by Fidel, who supported a nuclear power plant. Had the Soviets built a Chernobyl-type nuclear plant, an explosion or two would not have contributed to disaster prevention.

A very promising source for energy is the use of biogas from biodigesters. Biodigesters break down manure and other biomass to create biogas. Leftover solid waste material can be used as a (non-fossil fuel) fertilizer. On the other hand, an energy source which one author lists as viable is highly dubious: “solar cells built with gallum arsenide.” Compounds with arsenic are cancer-causing and not healthy for humans and other living species.

The take-away point is that each source of energy must be analyzed separately without ever assuming that if energy does not come from fossil fuels it is therefore useful and safe.

The three major sources of alternative energy—hydroturbines (dams), solar, and wind—share the characteristic that how positive or negative they are depends on the way they are obtained.

The simplist form of hydro power is the paddle wheel, which probably causes zero environmental damage and produces very little energy. At the other extreme is hydro-electric dams which cross entire rivers and are incredibly destructive toward human cultures and aquatic and terrestrial species. Disaster Preparedness mentions pico-hydroturbines which affect only a portion of a river, generating less than 5kW, and are extremely useful for remote areas. They have minimal environmental effects. But if a large number of these turbines were placed together in a river, that would be a different matter.

Many ways to produce energy start with the sun. Cuba uses passive solar techniques, which do not have toxic processes associated with electricity. A passivehaus design provides warmth largely via insulation and placement of windows. Extremely important is body heat. The design could work well in Cuba, where having three generations living together in a smaller space would contribute to heating quite well. On the negative side are land-hungry electricity-generating solar arrays. In between these extremes is low-intensity solar power, also being studied by Cuba.

Centuries ago, windmills were constructed with materials from the surrounding area and did not rely on or produce toxins. Today’s industrial wind turbines are toxic in every phase of their existence. In the ambiguous category are small wind turbines and wind pumps, both of which Cuba is exploring. What hydro, solar and wind power have in common is that the more energy-producing a system is, the more problematic it becomes.

Tunnel-visioning on a specific energy source denotes focusing on its use phase while ignoring preparatory and end-of-life phases and social disruption. With an eternal growth dynamic, corporations have a built-in urge to downplay negatives when there is an opportunity to add new energy sources to existing fossil fuels.

Cuba’s approach to alternative energy is quite different. Helen Yaffe wrote two of the major articles in Disaster Preparedness. She also put together the 2021 documentary, Cuba’s life task: Combatting climate change, which includes the following from advisor Orlando Rey Santos: “There are not enough resources for the panels and wind turbines, nor the space for them. There are insufficient resources for all this.”

Cuba scrutinizes many different maps for energy in order to focus on those that are the most productive while having the fewest negative effects. A genuine environmental approach requires a Life Cycle Analysis (LCA, also known as cradle-to-grave accounting) which includes all mining, milling, construction and transport of materials; the energy-gathering process itself (including environmental disruption); along with aftereffects such as continuing environmental damage and disposal of waste. To these must be added social effects such as relocating people, injury and death of those resisting relocation, destruction of sacred sites and disruption of affected cultures.

Cuba has no internal dynamics forcing it to expand the economy. The island could become a model of degrowth economics. Since “degrowth” is shunned as a quasi-obscenity by many who insist that it would cause immeasurable suffering, it is necessary to clarify what it would be. Global Economic Degrowth means (a) reduction of unnecessary and destructive production by rich countries, (b) which exceeds the (c) growth of production of necessities by and for poor countries.

This might not be as difficult as some imagine because:

1. The rich world spends such gargantuan wealth on that which is useless and deadly, including war toys, chemical poisons, planned obsolescence, creative destruction of goods, insurance, automobile addiction, among a mass of examples; and

2. Providing the basic necessities of life can often be relatively cheap, such as health care in Cuba being less than 10% of US expenses (with Cubans having a longer life expectancy and lower infant mortality rate).

Some mischaracterize degrowth, claiming that “Cuba experienced ‘degrowth’ during its ‘Special Period’ and it was horrible.” Wrong! Degrowth did not immiserate Cuba—the US embargo did. US sanctions on Cuba force absurdly high prices for many goods. One small example: If Cubans need a spare part manufactured in the US, it cannot be merely shipped from the US, but more likely, arrives via Europe. That means its cost will reflect: [manufacture] + [cost of shipping to Europe] + [cost of shipping from Europe to Cuba].

For Cuba to implement global environmental protection and degrowth policies it would need to receive financing both to research new techniques and to train the world’s poor in how to develop their own approaches. Such financial support would include reparations for:

2. the 1961 Bay of Pigs invasion, multiple attacks which killed Cuban citizens, and hundreds of attempts on Fidel’s life; and

Why reparations? Cuba has a track record proving that it could develop amazing technologies if it were left alone and received the money it deserves.

In the video Cuba’s Life Task, Orlando Rey also observes that “There must be a change in the way of life, in our aspirations. This is a part of Che Guevara’s ideas on the ‘new man.’  Without forming that new human, it is very difficult to confront the climate issue.”

Integration of poor countries into the global market has meant that areas which were once able to feed themselves now cannot do so. Neo-liberalism forces them to use energy sources that are life-preservers in the short run but are death machines for their descendants. The world should remember that Che’s “new man” will not clamor for frivolous luxuries while other starve. For humanity to survive a global epiphany rejecting consumer capitalism must become a material force in energy production. Was Che only dreaming? If so, then keep that dream alive!

Don Fitz is on the Editorial Board of Green Social Thought. He was the 2016 candidate of the Missouri Green Party for Governor. His articles on politics and the environment have appeared in Monthly Review, Z Magazine, and Green Social Thought, as well as several online publications. His book, Cuban Health Care: The Ongoing Revolution, has been available since June 2020.