The Broken Hours: A Novel of H. P. Lovecraft 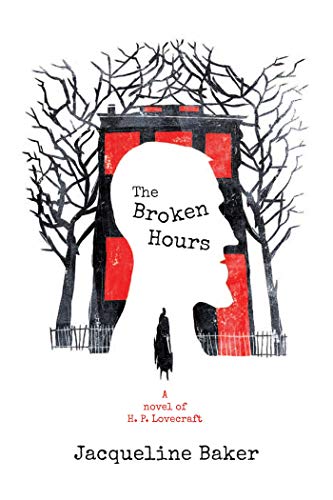 “The Broken Hours is a lovely homage to the fantastic dreams of the often heartsick writer who inspired it . . .”

In his personal life, Lovecraft could be a charming, sophisticated individual. Often seen as a pure recluse, he was actually quite the traveler, making stops as far west as Cleveland, as far south as Florida, and as far north as Quebec City. Lovecraft, the creator of the modern weird tale, was also an inveterate letter writer who kept up correspondence with fans and friends all across the United States.

Many in the contemporary world also like to think of Lovecraft as a racist caricature—an aquiline-nosed, Yankee aristocrat who wrote fiction that is characterized by racial hysteria and notions of Anglo Saxon supremacy.

The Lovecraft who appears in Jacqueline Baker’s The Broken Hours is none of these things. For the most part, the great writer nominally at the center of this book remains off stage for the much of the narrative’s duration. He only appears in the flesh twice, and in both instances, Lovecraft is depicted as an exhausted and somber ghost of a man. By 1936, the year of The Broken Hours, Lovecraft was suffering through the intestinal cancer that would ultimately kill him a year later.

Despite this novel’s subtitle, the true protagonist is a down-on-his-luck Boston man named Arthor Crandle. After taking a temporary job as the secretary and housekeeper of Lovecraft’s apartment on Sixty-Six College Street, Arthor soon becomes engulfed in an almost suffocating elegy.

If nothing else, Baker’s novel is a thoroughgoing rumination on loss and grief. Every single character in the book has experienced or is experiencing some form of loss, either from death or human failure. For Arthor, his time on College Street not only forces him to think about his own troubled marriage, but also about the Lovecraft’s cloying depression. Indeed, a specter from Lovecraft’s past is what drives the novel’s only plot forward.

In between descriptions of the strange house and the rainy, morose streets of Providence, Baker tries to conjure up a complicated love affair between Arthor and his downstairs neighbor Flossie Kush, a failed actress originally from Indiana. The mournful Arthor is in direct contrast to the bright and vibrant Flossie, and yet their time together in the house concludes with two different tragedies.

The one major weakness with The Broken Hours is its tortured mysticism. This is a book that is intentionally cloudy and purposefully ethereal; however, at times, this opaque quality comes off as a tad bit shoddy. There are also some bizarre mistakes, such as Flossie claiming to come from the nonexistent college town of Miami, Indiana (Miami University is in Oxford, Ohio). In another instance, a very Lovecraftian tentacle washes ashore on the Narragansett Bay, then promptly disappears from the story altogether.

One gets the feeling that there is much more to The Broken Hours, but the book ends without any sense of finality or even real substance.

That being said, The Broken Hours is a well-wrought poem that just happens to be a prose novel. This sad little tale is sure to linger on in the hearts and minds of readers. If for nothing else, The Broken Hours is a lovely homage to the fantastic dreams of the often heartsick writer who inspired it in the first place.