The Secret Race: Inside the Hidden World of the Tour de France: Doping, Cover-ups, and Winning at All Costs 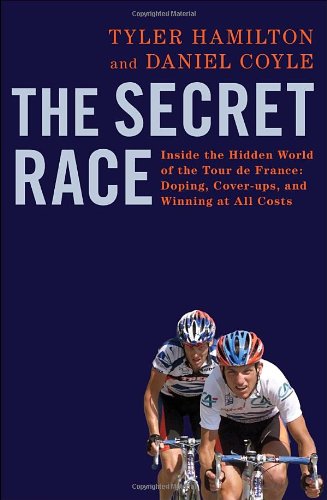 “In Hamilton’s telling doping did not make for an uneven playing field but rather was what any competitive racer must do to compete at the highest level.”

The secret of cycling success: You must learn how to do three things: Work hard; suffer; recover from your suffering while you are working hard. Then work hard, suffer, recover. Repeat. And again.

The insight that success results from maximizing the intensity of work and recovery represents the core of the temptation to engage in performance enhancing doping at the highest level of any sport.

The magic miracle of doping is that it allows the athlete to work harder, suffer more, and recover faster than is possible without that performance enhancement. Since serious competitors seek every edge—and many perceive that virtually everyone is doping—the question is not whether but how—and how not to get caught. Arguably, cyclists are subjected to far more drug monitoring scrutiny than any of their counterparts.

Rumors of drugs—cycling’s version of the famous Clairol hair coloring ad: “Does she or doesn’t she? Only her stylist knows for sure”—have surrounded Lance Armstrong for more than a decade. While journalists have advanced accusations, he rebuts the charges with the statement that he has been tested more than any other athlete—and there has yet to be a positive test.

The thesis of The Secret Race is that Lance Armstrong won his many victories, including the Tour de France seven times, not only by his phenomenal and acknowledged cycling prowess and work ethic, but also by his prevailing in most effectively employing drugs, relative to his competition—for winning that “secret race” was essential to winning the public races on the road.

The charges in this book merit consideration because of the credibility of (1) the publisher; (2) the accessibility to the source by authors; and (3) the prolonged preparation and research: 200 hours of interviews.

The story is told in the voice of Tyler Hamilton, one of cycling’s most accomplished, respected, and best-liked competitors. Hamilton excelled in the mountains and time trials: the storied “race of truth.” Hamilton was a fan favorite.

Daniel Coyle “lived fifteen months on Planet Lance, spending time with Armstrong’s friends, teammates, doctors, coaches, lawyers, agents, mechanics, masseuses, rivals, detractors, and, of course, Armstrong himself” in researching and writing Lance Armstrong’s War, an illuminating, bestselling, inside account of the sport at the highest level. Asked subsequent to that book whether he felt that Armstrong doped, Daniel Coyle responded that it was 50/50, though he had no proof either way.

This book is the next chapter: the secret story that he did not see about what goes on behind the scenes. The authors are 100% certain that Lance Armstrong rode to his victories with the aid of legally banned performance-enhancing drugs hardly compromises this book’s message. Of course, he was doing what the majority—if not all—of his competitors were doing.

In discussing the maneuvering to be in the right place for crossing an especially slick causeway in the 1999 Tour de France—and the race altering consequences for those who failed to be in the right place—Hamilton writes how Armstrong profited from navigating that part of the race better than his rivals. While some attributed his gains to luck, that was “certainly not how Lance saw it. Everybody knew the causeway was going to be slick. Everybody knew that crashes were likely. Everybody had a chance to get to the front. It was the same with everything: the unfairness was part of what made the Tour fair, because everybody had to deal with it. You made it or you didn’t. Period.”

Armstrong has been subjected to many investigations. Earlier this year the FDA investigation led by the same investigator whose groundwork led to the charges against BALCO and Barry Bonds was dropped prior to charges being filed. When it was announced the expected, inevitable charges would not be filed, it seemed that just as Lance Armstrong outworked, outmaneuvered, outsmarted, outresourced, outspent, and outraced rivals on the road—as well as the sport’s drug enforcers off the road—he had yet again outfoxed the system to evade a legal finding that could crush his career.

The Secret Race suggests that the charges were dropped by an Obama Justice Department senior official shortly after his appointment, not because careful consideration of the evidence led to the conclusion that there was no case. Rather this decision, The Secret Race suggests, was not based on review of the merits of the case but was made for political considerations: the recognition that it would be disadvantageous to side “against” a popular American sports hero and cancer cure advocate at the very time the President was seeking reelection.

Significantly, soon after the federal government investigation was dropped, charges were brought by the sport’s regulatory body. Armstrong decided not to contest those charges through an arbitration process—an alternative dispute resolution mechanism that for all its advantages over often dysfunctional court proceedings, can be extremely prejudicial and lacking the recourse, transparency, and accountability that characterize formal court proceedings.

Armstrong has instead chosen the place of public opinion over the legal system. In so doing, he has sacrificed his ability to race as a professional triathlete.

Responding to the prospect of being stripped of his victories and banned from the highest levels of competition, he proclaims, “People know who won the Tour de France seven times.” In advancing their version of the truth, the authors of The Secret Race make the case that Lance Armstrong won his great victories with the aid of drugs.

Understandably, this book focuses on doping, more than the racing and training aspects of the sport, though Tyler does reveal some illuminating insights about the legitimate aspects of the sport. At the same time he communicates the inherent rationale for and implicit equity of doping. In Hamilton’s telling doping did not make for an uneven playing field but rather was what any competitive racer must do to compete at the highest level.