Mr. Langshaw's Square Piano: The Story of the First Pianos and How They Caused a Cultural Revolution 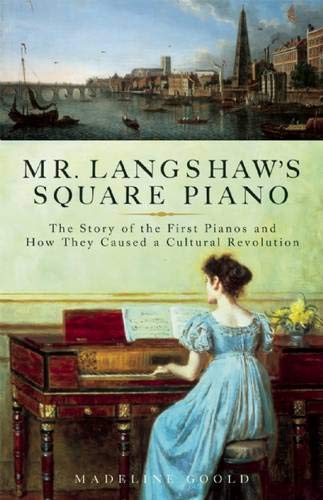 The piano.  Since its inception in the 1700s, it has evolved into a ubiquitous staple for many households.  In the modern era, almost everyone can play at least something—even if it’s only “Peter Peter Pumpkin-Eater.”  But this was not always the case.  When they were first invented—by Cristofori in Italy, and then Broadwood in England—pianos were a status symbol.  In the newly materialistic Age of Enlightenment, they were something to be desired and acquired.  Only after they had appeased the wants of the weatlhy could pianomakers, like Broadwood, turn their attention to the working class.

It is one of these working class pianos that the author finds and rescues at auction.  Broadwood Square Piano 10651 somehow managed to survive almost two centuries without being lost to history or converted to another use (like a chicken coop!).  It is unplayable, with most of the strings cut or broken, but other than that it is in remarkable shape with very little warping and few missing parts.  Mr. Langshaw’s Square Piano, by Madeline Goold, sets out to tell the story of how 10651 came to be, who owned it, and what its life was like.

Goold, a sculptural artist in her own right, begins promisingly, describing how she tracked down Mr. John Langshaw of Lancaster, England, as the original purchaser of the square piano in 1807.  With luck and much assistance, she finds a gentleman to repair her find and return it, if not to its original state, than to at least a playable condition.  Goold discusses what makes a good technician and offers helpful advice to others who are looking to restore older instruments.

Then, unfortunately, she devolves into a mundane recitation of facts about various people who may or may not have come into contact with anyone involved with the production or evolution of the square piano.  With no narrative to guide it, the book gets very choppy and the reader may find it hard to stay engaged.  It simply feels like Goold discovered a lot of what she considers fun facts while researching her piano and shared them without connecting them to any story.

An example: about halfway through the book, she seemingly becomes obsessed with the fact that Charles Wesley (yes, that Charles Wesley, brother to John) likes to rise at an early hour. Mr. Langshaw lived with the Wesleys for a while as he studied with the Reverend’s son, Charles.  We get several diary entries over the course of a few chapters that continually make this unnecessary observation. While potentially interesting on a first mention, the continuous repetition bogs down the reader.  This also happens with the long lists of Broadwood piano purchasers that the author felt necessary to include at several points.

Finally, in the last chapter of the book, after weaving through myriad other biographies, the reader finds out that the technician was able to successfully revive piano 10651 after two years of work.  That’s it.  There is no how.  There is no process.   The author then spends another few pages in the Epilogue thanking the people that helped her with her journey—researchers, technicians, and so forth. These are the people who should have been in her book, letting the readers see how the mammoth task was completed.

The idea for Mr. Langshaw’s Square Piano was brilliant: find an old square piano from 1807 and tell the story of how it was refurbished.  If only Goold would have given her book more to the process of bringing the piano back to life, instead of devoting so much time to biographies of the many, many people who came in contact with it.  Either that, or she should have titled her book The People Around Mr. Langshaw’s Square Piano.

Reviewer Amanda Mark is a classically trained pianist who studied under Jean-Louis Haguenaeur at Indiana University’s renowned School of Music. She heads the publishing division of Rustic Records in Nashville and works with the Nashville Public Library as a co-founder of the Popmatic Podcast and as a reviewer of various books and music media.