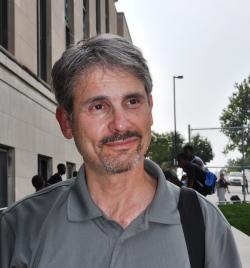 Steve Marantz is an author, journalist, and podcaster. A graduate of the University of Missouri School of Journalism, he has worked as a sports reporter for the Kansas City Star, Boston Globe, and Sporting News magazine, and has covered police, banking, City Hall and State House for the Boston Globe and Boston Herald.

As a researcher and producer at ESPN he contributed to the E:60 sports magazine show and the 30-for-30 documentary series. He has written four books, including The Rhythm Boys of Omaha Central: High School Basketball at the ’68 Racial Divide and Citizen Akoy: Basketball and the Making of a South Sudanese American. He created a podcast, Championship Stories, and will soon launch another podcast, Dear College, that features the college admission and scholarship essays of high school seniors.

The Rhythm Boys of Omaha Central: High School Basketball at the '68 Racial Divide

Next Up at Fenway: A Story of High School, Hope and Lindos Suenos

Citizen Akoy: Basketball and the Making of a South Sudanese American

No Time Like the Future: An Optimist Considers Mortality

The Speed Game: My Fast Times in Basketball

“His memoir is both proud and self-effacing, candid and evasive, an artful nod to Shakespearean comedy and tragedy . . .”